Since the band's inception in 1997, Carnal Forge has slowly but surely been making its way to the top of metal realms and with their latest "Please...Die!", their 3rd and best release to date, they finally showed us their real capabilities. Aggressive, fast and brutally violent tracks can satisfy most extreme music fans and bring unbearable pain to the neighbors. Although most of Carnal Forge members are involved in many side projects, by full dedication, hard work and commitment they proved their place in today's heavy populated metal scene and I believe it's only just the beginning. Jari Kuusisto (guitar) gave us some insight on their latest creation. 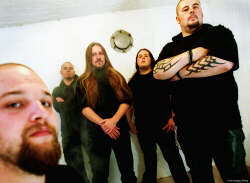 I haven't heard so much fire in a long time... I guess those fire demons got finally released.

Tell us about personal changes since "Firedemon"...

Joan, our guitarist decided to leave our band right after the European tour and he was replaced by my brother Petri who played bass at that time but his main instrument was guitar anyway. So, it was the obvious choice for us to ask him if he wants to play guitar in our band. Then of course we were left without a bass guitarist and Lars Lindén was working on our cover art, our web site and even worked with us in a studio and we knew he played bass in some bands so we asked him. Because he was so involved in our band already he said, "There's not much more for me to do than just join the band". All those changes were pretty smooth, no hard words or feelings. We're still good friends with everybody that left the band and basically we just changed some members and kept on going.

Well, lesson to all webmasters... keep playing and learning band's songs, one day you might become a member.

How has working in a mental institution affected the songwriting process?

Actually, not at all because you are put into a different role when you're at work. People that you work with are so sick and dependent on you that you try to take care of them and make their live as easy as possible.

Have you ever tried to play any of your songs during the lunch breaks?

[laughs] Some of the patients listen to pretty heavy music but I don't think I would ever play Carnal Forge for them 'cause I don't know how would they be able to appreciate it. They're schizophrenic and all that so they might go the wrong way and hurt themselves because the music is so aggressive. You never know what to expect from them.

Who or what pissed you off so much that you wish it to be dead? "Please... Die" - what's the story behind it?

[laughs] Well, the story behind it is that first of all we wanted a really strong title for the album so strong that once you see it you'll never forget it and I think this title does it perfectly. Also it's a statement from us to all the people that stand on our way and make life hard for Carnal Forge. We had a lot of problems with our former record label and stuff like that so we thought we're not going to put up with all this crap and we made a statement. We're not going to be put down to rest that easy. 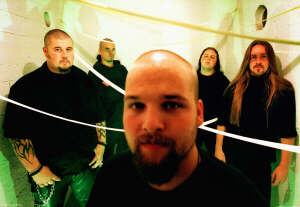 Speaking of a record label, how did you get on the Century Media and are you pleased with the work they've done for you so far?

Yeah, everything seems to work really well and so far we haven't had any problems at all. Compared to War Music that pretty much wasn't doing anything just released the records with no promos and no tours, where after we signed with Century we were immediately put on the European tour with The Haunted and Nile everything has been working really great.

Judging by the tone of the track titles lyrics seem to be very pessimistic. What's the general concept behind them?

Well, it's a lot of angry thoughts and violence in them. We tried to reflect how you would feel in various bad moods and also a lot of them are just pure fiction. Basically, what we tried to do is to write some lyrics that would fit to the music and since music is really aggressive the lyrics should be too.

You said that your work didn't have much affect on your music. So what influenced you to write such an aggressive and brutal album?

I don't actually have a good answer for that because we are pretty mellow guys and we live very ordinary lives. I think we just want our music to sound like that and all our aggression concentrates on writing it. It just gets this aggressive and I don't really know why.

What did you do differently this time around compared to your previous albums?

One thing that we really worked on was to get every song its own personality because we felt that on "Firedemon" album we've had good songs but they were very similar in general and it was pretty hard for the listener to differentiate one from another. This time we wanted to give each song its own identity.

Seems like you are very satisfied with work of Pelle and Lars from the Studio Underground, once again you selected them as a recording and mixing studio...

Yeah, me and the other guys were recording there many times with different side projects for period of 10 years now so we are very close friends with Pelle and Lars. They know what we want and how we work and it feels like home when we go there. They do such a good job that it really doesn't make any sense to change the studio.

"Please... Die" - 'Faster than Slayer more intense than The Haunted' how do you like that statement?

It's pretty cool. Our music is a bit faster than Slayer and more aggressive than The Haunted and those two bands are really great so I don't have any problem with being compared to any of them. To be compared to the one of the biggest bands today is just great for us.

You mentioned side projects... how do you manage the work between them and which band is the main one for you?

Where and when can we see you live?

We have discussed it a little bit with Century Media and if everything goes as planned we might show up sometime by the end of 2002.

Thanks a lot for our fans for support, visiting our site and writing in our guestbook. We're going to work our ass off to show up in all countries we can and hopefully you'll see us somewhere in 2002.