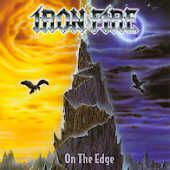 When I first heard a couple of samples off of this disc, I started laughing and thought I would be doing some serious mudhole stomping on this band. After giving it a full listen, I have to say that in a funny cheese-ball way, it entertained me.

Understand that if this band weren’t so dead on with their sound, I’d dismiss it as a comical satire on the heavy metal of the late 80s and early 90s. If those concepts don’t hold any entertainment value for you, stop reading now and forget this band exists. From here on out, take what you will, I’m just going to tell you what I’m hearing.

Martin Steene, the man with the throat, couldn’t be a better mixture of Ugly Kid Joe’s Whitfield Crane and Vince Neil even if Dr. Moreau had done the gene splicing. To give you an even better picture, this guy cites Sebastian Bach and Jon Bon Jovi as vocal inspirations and Helloween’s Keeper as a pivotal album in his life. I think if you try to mix all of those elements together, you’ll get a pretty good idea of what you’re going to hear on this disc. While his voice leans much more toward that of Whitfield Crane’s, he will on occasion… well, once during the album… surprise listeners with a 5 word growl on the track "On the Edge".

The guitar work and, well the rest of the band, sound like a mildly entertaining Iron Maiden Jr. It’s some pretty thick power metal with frenzied solos that leaves you with an overall positive sound. In fact, power metal doesn’t get any happier than this.

As if to make sure no one forgets that this band is rooted in the asinine-lyric-writing metal of the late 80s, they throw in a ballad-ish song called Lost n’ Alone. It’s stuff like this song that gives stand up comics like Henry Rollins (Mr. "I’m not a stand-up comic!") some great reference material. Here’s an example: "I’m lost in loneliness / I feel so cold / I’m lost in emptiness / I need somebody to hold".

Ok, so with the exception of that remarkable piece of rhino feces, this album, would be a great soundtrack to the task of raising an army of apes to invade and destroy Nicaragua.

Bottom Line: Don’t be afraid to judge this one by the cover. I think I need to crap.