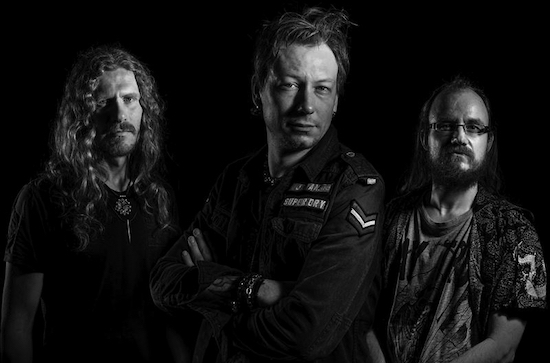 Danish power metallers IRON FIRE has premiered a lyric video for 'Dawn of Creation,' the title track from forthcoming double-album Dawn of Creation: Twentieth Anniversary, which includes a special collection of demos, live tracks, covers, and three new songs, will be released May 4th, 2018 via Crime Records on double-CD Digipack and digital formats.

The label released the following statement concerning the forthcoming historical metal document: "So now it's been twenty years since five young guys from the Danish country side decided that power metal should be the first step on their quest to glory. The name Iron Fire came up and carved in stone that these Danes meant to be real, and despite their young age, forge catchy power metal rooted in the classics of Helloween and Running Wild. As the journey continued, ups and downs turned and reformed the band into the trio of today. And now that trio is looking back, and in their wish to celebrate 20 years of power metal, a selection of demo songs has found its way to a double album. Along with three brand new songs Iron Fire provides old songs in the original pre-album versions as well as previously unreleased material. This is the raw and pure, from the heart of Iron Fire. Enjoy!"