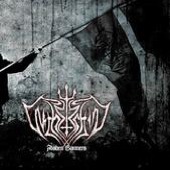 Withershin at first glance seems to be a rather basic Black Metal on the surface, following the pattern to a tee. Good thing that my first impressions are not what I go by in the end. Upon listening to it over again the second time, it struck me. These guys are pretty great, and they have that little extra something to them that I always look for.

Plainly put, Sweden's Withershin are some of the most furious group of guys you can have recorded. Each not and beat seems to jump out at you, and go to rip your throat out. They seem to be very uncompromising in their approach to their music, opting to be right in your face for the entire album and offers noting in the way of cuteness in any way..

They all seem to be exceptional musicians, keeping everything rather simple but knowing when they have to blast it out and then shred like mad. Withershin seems to take the ball and run with it, unlike most young bands out there at the moment. They really give me the impression that they are a band that is on the rise to me, the maturity of the lyrics shine through the brutal wall of music. They are not perfect, and need some guidance in places... but they are headed in the right direction.

Withershin seems to be heading for the point where they just might start to push the boundaries of Black Metal. With lyrics so incredibly written... they are a band to watch over the next year. They have not made the best Black Metal record as yet, although "Ashen Banners" is a impressive slab of music on it's own... but for some reason, I think in the future they will redefine their own brand of Black Metal and make that ultimate record a reality.

Withershin’s Ashen Banners album is dark, chaotic, and brutal to say the least. The lyrics are delivered by lead singer, Nine, with just as much ferocity as the rest of the album. The line-up on the album is rounded off by Hizon on guitars, Zek on drums, and Hex on bass. The first impression I got when I first heard Ashen Banners is that it may not be Black Metal at its best, but it’s still pretty damn good.

While each song on this album is good, one in particular, “New Era Holocaust”, is probably the best one as it is one of the darkest, sickest songs I have ever heard. Lyrically and musically, “New Era Holocaust”, has it all to make even the most demented listener’s spine tingle with both terror and satisfaction. Some other notable songs not to be missed are “Reap the Impurities”, “Lights in Zephyrs”, “Never Condoned”, “Reincarnation”, and “Entering the Void”.

Overall, Ashen Banners, is a solid album, but could have still used a little work with the production. Most of the other elements are there for it to be a respectable album in Black Metal history. If you are a true fan of Black Metal, buy this album now because it is one that can certainly be appreciated and should be a staple in your music collection.

Bottom Line: If you haven’t quite found that album that shakes you to your very core, you should definitely check out Withershin’s Ashen Banners.