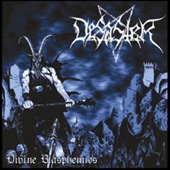 It would be a difficult decision for me, if I had to write a list of the ten best songs of Germany's most consistent black thrashers Desaster. The band has composed an immense number of fantastic tracks. But one thing is for sure, I would not select any piece of Divine Blasphemies. In a series of very good albums from this restless band, this one constitutes more or less clearly the low point. This may sound very harsh. Believe me, I am not talking about a bad product. Nevertheless, this album has to rise to the challenge of criticism.

Lead vocalist Okkulto had left the band. His successor called himself Sataniac and he preferred a very brutal style. His growling sounded more dangerous than the barking of a rabid dog. In other words, the vocals could definitely be regarded as a successful contribution to the overall result. But due to his raving approach, Sataniac's vocals varied only slightly. He therefore did not completely reach the level of Okkulto's previous performance, because he was seemingly not fully able to express various moods. The most significant difference to the former albums was, however, the slightly lesser quality of the songwriting. For instance, the majority of the songs delivered acceptable, but not outstanding choruses. A certain number of the riffs did not develop a long-term effect because of their ordinariness. Additionally, some of the pieces, for example 'Alliance To The Powerthrone' lacked of conclusiveness. Its individual parts were fine, but they did not lead to a stirring composition.

Of course, songs like the rapid title track or the hammering mid-tempo number 'Shadowinds' did not signify a change of style. Quite the contrary, they followed the proven method of Desaster’s songwriting. But exactly this had an unintended effect, because the performance of the band appeared almost as a routine job. The songs could not be described as predictable, do not get me wrong. Nearly all of them were solidly constructed. Furthermore, Desaster also paid tribute to Slayer's "Postmortem" in a clever manner. The cross reference at the end of the fifth track, '...of Impurity', constituted a nice gimmick. But I was just not able to identify a real highlight, perhaps with the exception of the brutal 'Symphony Of Vengeance'. This might just be a question of personal taste, but that is my position. Finally, I saw no reason why Kreator’s Mille showed up in 'Nighthawk', because his ordinary voice did not add any value to the full-length. His engagement almost seemed to be an act of name dropping. They should have once again taken a real cult singer like Living Death's Toto.

Admittedly, it was just the question of minor details that made the difference. Therefore, two statements were true. The songs present on this full-length did not need to hide behind the pieces of the genre competitors. But the songs of the competitors no longer had to hide behind the pieces of Desaster, too. This was remarkable because the Germans had always been capable of leaving the majority of other bands far behind. To sum it up, this album was produced appealingly, primarily because of the heavy and vigorous guitar sound. Desaster offered 40 minutes of solid and ruthless black thrash without igniting an acoustic wildfire. But that was due to change very soon. The successor of Divine Blasphemies was the merciless Angelwhore. From my point of view, it should become their best output up to now.