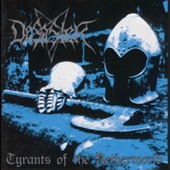 Tyrants Of The Netherworld, the third full album of Desaster, had a luxury problem. The tireless band presented – almost without exception – great songs, but the monumental title track overshadowed everything else. Nevertheless, let me start from the beginning. Desaster had made a name for itself due to their convincing previous outputs. My expectations concerning Tyrants… were correspondingly high. It had not been a simple task for the band to fulfill my hopes for an outstanding successor of the fantastic Hellfire's Dominion.

On the basis of this situation I appreciated 'Nekropolis Karthago' without being totally enthusiastic. The song kicked off the album in a very rapid and aggressive way. The following tunes of the record's first half headed more or less in the same direction. Thrash metal provided the basic framework which was ornamented by black metal elements. In conformity with their outputs so far, every tune was presented with a great awareness of tradition. For instance, listen to the Schmier-like screams of Okkulto in 'Victims Of My Force'. These songs reached a more than passable level, albeit a slightly weaker chorus ('Sworn To Avenge') had crept in. But, as written above, all these tracks did not make my blood boil. Something was missing, an indefinable ingredient, the unmistakable aroma of Desaster’s blackened thrash. This was doubtless not only due to the production that sounded somewhat dull. Then came the title track…

A gentle guitar riff, accompanied by rain and thunder, formed a melody that grew to a harsh verse. The haunting and fairly melodic chorus marked the temporary peak. But the unholy atmosphere became even more intensive during the middle section after the second chorus. A gloomy bass guitar line was drowned out by fantastic guitar licks while the horrifying voices told the old yet still fascinating story of the battle between good and evil. After the culmination of that part, the third verse and the last chorus finished this masterpiece in a brilliant way. When I heard this one for the first time, it was a mind-blowing experience and I truly recommend every fan of extreme metal to lend an ear to this track. It's only disadvantage was that it came to the end much too quickly, although it took more than seven minutes.

Of course, the remaining songs were not able to keep up with this giant. The band performed on a high level without creating a second titanic black thrash monster. But I will not hide from you that the neck breaking 'Disciples Of Darkness' was also very convincing because of its fast-paced riffs and the furious and excellent guitar solo. If you want me to define a second highlight, I would like to choose this crusher. As a result, there were no reasons to complain from an objective perspective. Desaster demonstrated once more that they were an entrenched bulwark against modern - or should I say false - metal. Nevertheless, due to the quality of the title track, this album left you with the feeling, that the band had not made full use of its tremendous opportunities.