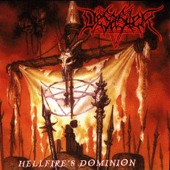 From its beginnings, Desaster always commuted in a skilful manner between thrash and black metal. A clear preference was mostly difficult to detect. In this respect, Hellfire's Dominion presents an exception. The thrash hammer dominates here, although the band did not forget to add some of their typical medieval melodies. But also with regard to the absence of black metal elements, the album does not appear like a foreign object in the band's discography. The unaltered metal still reigned.

Good news first: the album works as a whole. The compositions had surely not been written overnight. The band took the liberty to work out the well composed songs thoroughly. You will therefore not find inappropriate breaks which would hurt the flow of the pieces. Due to the clever arrangement of the songs, harsh and rabid parts are alternating with more melodic sequences. Of course, the softer interludes do not destroy the aggressive basic atmosphere of this record. They just make a welcome change and increase the dynamics.

It is remarkable that each and every highlight shows its own approach. The melodic yet heavy 'Teutonic Steel' could not be confused with the violent title track. The thrashing 'Metalized Blood' followed a completely different pattern than the melancholic and almost balladic 'Castleland'. This list of songs could be extended almost indefinitely. But common to them all was their energizing atmosphere and the pure metallic spirit. This made the band so appealing. You could always rely on their fundamental philosophy that could be described sufficiently with only one word: metal.

The lyrics bore witness to this attitude. I recommend reading the representative lines of 'Past... Present... Forever...', because they express that deep attachment to the metal scene in a brilliant way. Moreover, the song is performed excellently because of its forceful riffs and the dramatic end. It is therefore a pity that this track has almost fallen into oblivion. Apart from that, a chorus like "Command for battle now asounds / die by Teutonic steel" is maybe not without difficulties in a historical context. But honestly, a political approach is not discernible. As far as I know, the band members are not interested in politics. They simply get enthusiastic about thrash metal and all of them do their utmost to create a strong album. However, I want to pick out the mighty vocal performance of Okkulto. His powerful voice adapts to the mood of each individual song. Furthermore, the vocals benefit from a more than solid production. This applies to the instrumental section as well.

Speaking of Okkulto: he was not the only lead vocalist on this output. The band had recruited three guest singers for 'Metalized Blood'. Among them were Lemmy from Violent Force and the incredible Toto from Living Death. They proved impressively that their hometown, "Dead City" Velbert, was still alive. Atomic Steif (Living Death, Sodom and many more) did the same while being involved in the production process. As you can see, the guys of Desaster remained faithful to their roots in every respect.

One question remains: who destroyed the castles which are shown in the superbly designed booklet? On account of Desaster's origin, the southwest of Germany, it is likely that Napoleonic troops devastated them. But in view of the vehemence of the band's performance, the disastrous horde could also be responsible for these heaps of ruins. Frankly speaking, there is no doubt that they can make the thickest walls come tumbling down.