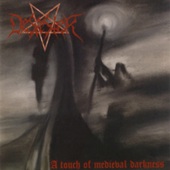 In the early days of the German thrash metal movement, bands like Sodom, Destruction or Iron Angel integrated black metal elements in their compositions. About ten years later, Sodom played punk songs, Destruction were irrelevant and Iron Angel no longer existed. In addition, Desaster's debut appeared in difficult times, because grunge and other innovations (or should I write innovations within quotation marks?) dominated the market for more or less metallic sounds. Desaster thus set a signal for dark underground metal and the guys were wholly concentrated on creating music, contrarily to some Norwegian guys that performed black metal as well as criminal actions a few years previously. This deserves a special mention, because it illustrated that the rebel spirit of metal was still alive. Nevertheless, let me start this review with the only annoying detail. The album sounds blurred and almost powerless. It is difficult to identify the single instruments. The bass drum, for example, can hardly be heard. It can therefore be said that the unclear contours of the interesting cover motif aptly fit to the sound of this debut.

But this does not really matter, because metalheads with a soft spot for blackened thrash will enjoy this output. Due to the mystic name of the album, Desaster enrich their songs with medieval sounding riffs. They do not appear in each song, but they are used effectively. The title track marks an example of a fine combination of metallic harshness and medieval melodies, while vocalist Occulto contributes the necessary black metal aura. Not only because of this songwriting formula, Desaster do not just appear as a reincarnation of a formerly worshipped legend. Furthermore, it is noteworthy that the title track prefers mid-tempo and this is no exception, because mid-tempo parts dominate this album. This has been a good decision due to the miserable sound. As soon as the tunes get really fast, the snare drum disappears. Perhaps you like to test 'Fields Of Triumph'. It offers strong riffs and a convincing song structure, but as said above, the snare is disadvantaged during the up-tempo part.

However, Desaster score with their excellent guitar work during the whole album. Maybe it is getting most obvious when listening to the straight 'Devil's Sword' that puts its focus exclusively on sharp and aggressive riffs. And there are more vigorous songs that run in the same vain and they all are of comparable quality. But very much on the contrary, 'Visions In The Autumn Shades' presents itself as the most melodious track. You might almost call it a ballad, but it is neither lame nor boring. If you like its guitar line, you will surely enjoy it. If you do not appreciate its melody, it is equally certain that you will perceive it as disappointing. But although this song is not among the highlights, I like it because it provides an element of the unexpected due to its softer approach. By contrast, 'Crypts Of Dracul' constitutes a shortcoming. It is just too long - almost nine minutes - and offers an incoherent intermezzo. In addition, it hurts the flow of the album because of its oversized atmospheric intro. But fortunately, this remains an isolated case.

To summarize it all: even after more than 18 years, this debut stands for itself and was, also in retrospect, a first remarkable sign of Desaster's strength. It was not just a good album. Rather, it constituted a sustainable concept for the future, not least thanks to the balanced mixture of thrash riffs, black metal charisma and medieval elements. When the last tone of the bombastic outro has died away, you will probably press the repeat button.