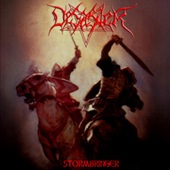 Some bands use EPs for unspeakable experiments and confront the listener with "freaky" stuff. Other groups just want to make money by releasing an EP with a well-known studio song, its demo version and a live version that was recorded in the middle of nowhere and, of course, overdubbed in the studio. The greatest and most mendacious idiots call themselves "fan-friendly" and add an inaudible outtake as a so-called "bonus". Desaster are different. They are not stingy with new compositions and, what is more, these songs are excellently done. Four tunes are brand new, if one takes the outro into account - but more about that later.

First of all I would like to emphasize the solid production after the sound catastrophe of the debut. This time there is nothing to grumble. The visual appearance fits, too. The fantastic cover motif is flanked by tastefully full colour pictures of castle ruins. Thus, this digipack impresses with its love of detail.

Returning to the songs I have to start with 'Sacrilege'. I know, it sounds like an empty phrase, but this compact and tight outbreak of aggression will break your neck. The merciless riffs, the memorable chorus, the way this piece comes quickly to the point - everything matches exactly. Those of us who find their fulfillment in songs of greater complexity might prefer the opening title track. Indeed, a comprehensible choice, because 'Stormbringer' successfully combines harsh up-tempo parts with some quiet notes. I particularly appreciate the dynamic double bass drum that leaves its imprint. 'The Swords Will Never Sink' and the new recording of the brute 'Face Of Darkness', originally appeared in 1993 on their first demo, are solid and quite successful, too.

As shown in their booklet, Desaster call the music on this output "traditional black metal", but I think it still has a large proportion of thrash. This is proven by the tradition-conscious choice of the Kreator cover "Tormentor" which sounds great without being really essential. And additionally, there are the typical medieval elements again, even if only shown in the atmospheric outro. Therefore, the bottom line is that these defenders of the metal faith have stayed right on track - and this is good to know.