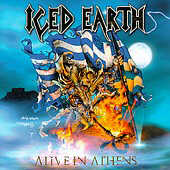 It’s only after listening to these three godly discs that I understood and embraced the true power of Iced Earth. From start to finish, the boys continuously pound you with the very best of their 9 year-old career and put considerable effort into every song. I don’t know how much dubbing was done but I didn’t notice a single mistake, which is hard to believe of a live show this long, and so I think they must have cleaned a few things up in a studio but the power and energy that emanated from the stage has not been compromised at all.

Played on two nights, recorded on three discs (only two on the American version, I once again curse the treachery!) Iced Earth have proven to the world that they can sure as hell cut it live and are not just one of the many studio bands out there. And to take the show a step further and show their boldness, they bravely unleashed upon the crowd the monstrous, 16 minute, 'Dante’s Inferno', which they performed with the utmost skill and power!

Jon Schaffer’s shredding is as good live as on any album and he’s got killer and, according to him, custom-made amps. The guest drummer, Brent Smedley, doesn’t let up for a second! Be that as it may, the vocalist Matt Barlow, however, is the main driving force in the whole show. This man’s energy and presence is amazing! He puts 100% effort and emotion into every song and correctly invokes every song’s true feeling. The second disc concludes in the fiery climax of the three godly epics of the "Something Wicked" trilogy, and then, for the killing blow, they treat the fans with a favorite; 'Iced Earth'. You’re left stunned and blown away.