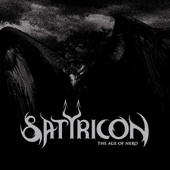 Satyricon is a prime example for all the things that went wrong in the once leading country of the second wave of black metal. Actually blessed with a great compositional talent, Satyr and his drum slave left the path of the devilish sounds one day. Now, Diabolical had already been an ambivalent record. Unfortunately, The Age Of Nero was not able to bring the duo back on track. This is a pity, because songs like 'The Wolfpack' with its Darkthrone-like droning guitars or the pretty dynamic and comparatively vehement 'Black Crow On A Tombstone' show the potential of the guys. But the latter with its catchy chorus also cannot hide the vision of Satyr. He wanted his music to be a bit heavy, a bit black and – last but not least – a bit commercial. And so he sacrificed the rage, the misanthropy and the despair of real black metal one more time on the altar of greed. Even a relatively angry song like 'Die By My Hands' could not be finished without some pretty lame parts.

But don’t get me wrong, the tempo shifts are not the main problem here. Black metal is flexible enough to fascinate us in many different velocities. That’s probably exactly the problem of The Age Of Nero. It wants to be black metal, but it lacks spirituality, attitude and authenticity. I never have the feeling to listen to a black metal album, it’s something like metallic dark rock or whatever. Among other things it is because of the vocals. When did Satyr’s voice lose its charisma? His monotonous speech without any variations triggers absolutely nothing in me. Aggravating the situation, the guitars lack devastating heaviness – they rather sound like someone walking with rubber boots over plastic waste. Thus, the music is not able to spread an encompassing sinister aura, although some guitar lines point in the right direction. Yet there are also melodies that do not serve their purpose. 'The Sign Of The Trident' holds some repetitive parts that intend to create a hypnotic effect, but they are simply too weak.

Moreover, the longer this song lasts the more it gets obvious that the band runs out of ideas. The second half of the album does not add many (or any?) new aspects to the release. I thought it could be a good idea to ask the songs “what are you doing here?”, but they just answered “we beg your pardon, we also don’t know”. Honestly speaking, this was not very satisfying – for both sides. And that’s all I can say about a release that could have been much, much better, because trace elements of Satyr’s undisputed talent are still identifiable. But The Age Of Nero is just a complacent underperformer. It has zero integrity, zero personality and zero “Du som hater Gud”. Considering the skills and the merits of Satyr, it’s nothing but the "The Age of Zero”.