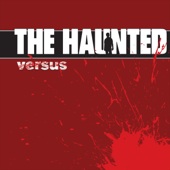 For four albums, The Haunted were special to me. No album was excellent from front to back, but there were some extremely strong songs to discover. I liked that. Even today I still have the CD insert of a Metal Hammer issue at hand, which contained the bonus song of the Swedish pressing of One Kill Wonder. Then came The Dead Eye, a record that made me think I was the owner of a dead ear. Or even two dead ears. But I didn't want to part with The Haunted with such a shitty record. Besides, everyone deserves a second chance and yada yada yada, you know the drill. So I bought the special edition of Versus with four bonus tracks on a second CD. To start here: these offer a relatively fast-paced but still rather expressionless piece 'Seize the Day', a nice but unspectacular instrumental (ironically the title track 'Versus') and two bland pieces that come and go without resonating in any way. Well, you think, that's the way it is with rejects and try to rejoice in the fact that Devolve at least transports an edgy aggressiveness. Nevertheless, compositionally everything remains on a manageable level.

Never mind, there are certainly better titles on the main body of work.... well, let yourself be surprised. Let's talk about the production first. Here, The Haunted manage to appear quite hard, modern and crystal clear. The guitars have a cutting tone, the drums unleash their full force and the bass doesn't come up short either. Dolving's vocals are also well staged. The fact that he exaggerates a bit in his I-am-the-hardest-asocial-acting is another story, as is the obnoxiousness of his whiny intermezzos ('Pieces', 'Rivers Run'). But as I said, the mix is fine and it's ironic that it's the technical, not the musical, side of the band that lastly adds a touch of extra class.

But now to the eleven songs themselves. At times, The Haunted regain their former strength, but they obviously no longer have confidence in their old strength. 'Little Cage' starts strong and has a tingling, heavy part, but is slowed down by an inadequately melodic part. Simply living out three minutes of pure aggression is no longer possible for the band or simply too primitive. (Only the auspiciously named album highlight 'Crusher' makes an exception.) One would like to kick people with such potential in the ass for this sin of omission. But I've heard that's forbidden, so I don't do it. Instead, I tolerate being maltreated with hard, but mostly poorly conceived melodies that often ruin the good approaches. Somehow all the material sounds to me as if The Haunted would have liked to have had a difficult childhood in the Bronx. But unfortunately their mum made them hot chocolate in the Swedish province and read them Pippi Longstocking as a bedtime story. This leads to deductions in the authenticity rating (also because I find Sweden very beautiful). In addition, total failures like 'Ceremony' worsen the overall picture.

All in all, Versus appears as an album that wants to impress with a natural heaviness, a few thrash elements, many melodic segments and different moods. But a diverse portfolio does not guarantee a good or even average album and Dolving’s vocals are rather self-loving than charismatic. He can play the desperate and angry guy next door while screaming “just stay the f**k away from me” ('Iron Mask'), but don’t worry, I didn’t intend to visit him. No doubt, The Haunted leave more on Versus than they pick up. Solid pieces like the two closing tracks flatten a lot, but the album is still the result of too many wrong decisions. Consequently, I remained “unseen” at the release of their next album.