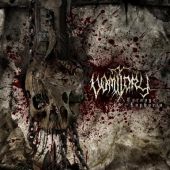 Carnage Euphoria, released in 2009, starts with a blast beats interfused part that has one foot in death metal and the other one in grindcore. Yet it is naturally just a question of time, until the death metal elements gain the upper hand. Vomitory presents another deadly dose of Swedish evil, a pretty typical one, if we neglect that the high quality standard of the band is definitely not the usual standard of the light and shadow offering subgenre. The guitar work is walking the thin line between technical demand and pure massacre and this is the feature that separates Vomitory from all their Swedish and non-Swedish competitors, at least in my humble opinion. Neither are the vocals something special, because they sound powerful but deliver nothing else than the normal, extremely deep barking. Nor does the drumming make a real difference, even though it does not lack precision. Under these circumstances, it is not surprising that the sometimes stoic, sometimes raging and sometimes rotting guitar lines and the elemental power they create lend Vomitory the hallmark which remains unmatched by comparable formations.

Of course, the narrow stylistic frame does not leave much room for breathing and sooner or later everything wears out. It’s therefore only logical that Vomitory cannot score with totally new sound elements on their seventh long-player and moreover, they are at risk to become victims of their own glorious past. They had already fully exhausted the musical dimension of terror, horror and brutality with their former albums. Consequently, Carnage Euphoria marks an effort that falls under the “more of the same” category and economically thinking people can come to the conclusion that one or two of the previous Vomitory albums are enough material for their private collection. I understand this approach to a certain extent, but for me it is more important that a band does not deny its roots. No doubt, Vomitory fans get what they expect when buying this release and this is a value in itself.

I’m sure that nobody doubts the high standard of the production. High pressure and voluminous violence characterise the mix and give the songs the shape they need. In sum, I don’t see any major flaws, last but not least in view of the good songwriting-skills of the band, especially drummer Tobias Gustafsson who has composed the lion’s share of the material. This is no death metal by numbers, because every track seems to be meticulously constructed and is built on a very stable fundament. The right amount of breaks keeps the material pretty varied and this leads to fine bone-breakers like the rasping yet smooth 'Serpents', 'Ripe Cadavers' with its prominently placed bass guitar, and the absolutely murderous, aptly titled 'Possessed' that makes me almost believe that Terrorizer’s “World Downfall” was slightly too soft. Simply speaking, this is not the best Vomitory album, but they have never released a bad one.

A very old fashioned sound with a modern edge is crafted by Vomitory. There’s a definite leaning towards classic bands like Entombed, which is a great type of music to emulate to begin with. However, there is a very modern aura that overwhelms the proceedings as well. It all leads up to an effective sound that punishes though it is somewhat straightforward in nature. The riffs to be found are chunky and thick, which suits the style of the band very well. They manage to punish the listener in a controlled fashion that is certainly welcome. Altogether the band manages to pull together a stripped down approach that works effectively. The style is consistent from one song to the next, although there is a tendency to sound too much the same after a while.

There aren’t really any high points to speak of as everything is of a pretty high quality throughout. One can observe the first track 'The Carnage Rages On' provides a pretty nice blueprint for the remainder of the disc to come, however. The band resurrects the energy of Entombed’s classics like "Left Hand Path" and brings them into a more modern form. This particular style needs some attention as it is as distinctive a form of Death Metal as can be found. It’s quite welcome seeing that Vomitory is able to take a rollicking palate and add their unique flavour for a quality recording.

"Carnage Euphoria" has a crunching, yet intelligent make up that should find a solid position within the Death Metal genre. This is a solid record that Death Metal fans will easily appreciate and come to enjoy greatly. The consistency of the material means that there is very much to like even though it has a slight tendency to lack variety at times.