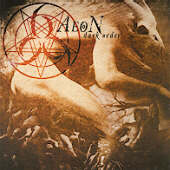 I hope you don’t think that Aeon is just another melodic death metal band from Sweden cause if you do then opener ‘Return Of Appolluon’ will kick you so hard in your trap that for the rest of the album you will be listening toothless.

In short, Aeon is a mix of Morbid Angel, Deicide, Incantation and add some Cannibal Corpse for a good measure. That doesn’t mean that they are a rip off of any of those bands but rather a very intelligent combination of techniques and styles performed by above mentioned. And to find out how near-perfect balance it is you have to hear it for yourself cause I’m so impressed by those 6 tracks that my opinion might be a little biased right now. “Dark Order” is brutal, violent and viciously evil and by now you all should know that that’s all I need to get my blood pumping.

The guitar work of Zeb Nilsson and Morgan Nodbakk is exceptional. Last time I’ve heard something so tasteful and mature, it came from the Trey Azagthoth and Erik Rutan teaming in Morbid Angel although Aeon’s pair is not quite there yet but damn close. Technical and very brutal riffs, excellent growls and a blasphemous rhythm section make “Dark Order” nothing less than the best death metal mini-debut of the year. ‘Return Of Appolluon’ and the two followers are absolute fury, hate-breathing assaults where ‘The Awakening’ and ‘Hell Unleashed’ bring some mid-tempo sections which are divided by my less favorite but still great, gore-minded ‘Bloodlust’. What makes the most painful experience while listening to those 22 minutes of hate is the fact that those guys have already written the material for their full length debut and gave us only an MCD to feed our sickest desires. “Dark Order” is an absolute killer and any death metal fan can’t live without one.

Bottom Line: One of the most impressive debuts I’ve heard in years. Aeon has aspirations to death metal’s top league and they got my first inducting vote.