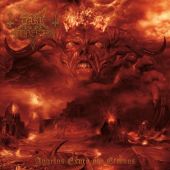 Dark Funeral, the reliable partner of their supporters and, together with Marduk, the flagship of Swedish black metal, released the here presented album in 2009. Does it show a band that is expanding its musical horizon? No. Do we have to notice a vapid stagnation? Again: no. Dark Funeral were competent enough to vary their style successfully without adding inappropriate elements. The ambassadors of violent yet sometimes relatively melodic and always comprehensible black metal swing the axe and storm over the barricades of the lost souls of the mainstream. That's not to say Dark Funeral set the focus on high speed while neglecting any other factors which can make an album great. "Stigmata", for example, is based on grim and furious leads and extreme velocity does not get the short end of the stick. Yet this is just one facet of this artwork. "Stigmata" belongs to these tunes that have their own intro and outro. Its ferocious main part is framed by mantra-esque incantations and this configuration lends the song a special appearance. Finally, I must stress that "Stigmata" is free of embarrassing elements. This statement does not go for "My Latex Queen" as well. I am not talking about its obscene and exciting title (indeed, very obscene and very exciting, at least for prudish spinsters). It is rather the case that lines like "Latex queen - feel my tongue in deep / Whirls around - climax is almost found" are simply true. The climax is only almost found and who the hell needs such a climax?

The density of the professional production is both a blessing and a curse. On the one hand, it feeds the well-arranged songs with the technical equipment that they need, on the other hand its opulence highlights the very viscous leads of rather slow-moving tracks such as "In My Dreams". Nevertheless, at the end of the day, this is another well produced record of the Swedes, neither high-polished nor extremely raw. Speaking of rawness, guess we all know that the sinister lads of Dark Funeral were never well known for their underground affinity. Perhaps this explains why the band has recorded "My Funeral", a catchy bastard which combines elements of black metal with dark pop components. To avoid misunderstandings, no pop fan will ever enjoy this piece. It is just a scion of "Goddess of Sodomy" and an ancestor of "Temple of Ahriman", a similar constructed piece of the current full-length.

Lead vocalist Emperor Magus Caligula - how about a slightly longer pseudonym? - celebrates his farewell performance on the here reviewed album. No doubt, insanely raging guitars like those of the opener or "The Birth of the Vampiir" give not much wiggle room for a highly diversified contribution of the self-titled emperor. The same applies for the restlessly hammering drums of the majority of the songs. Yet against all odds, he musters up his courage and makes his mark on the songs. His friends would probably describe this vocal performance with the words charismatic and powerful, people without good music taste might use terms like psychotic and unscrupulous. Honestly speaking, I see no reason to choose my side. As long as we speak about black metal, I like each and every of these attributes. On the other hand, I do not highly appreciate the excessive use of pseudo-intellectual Latin titles. Does Satan speak this language? Or did Lord Ahriman visit a humanistic high school? I have no clue, but fortunately, the title track wipes away my crude thoughts. Dark Funeral present another orgy of unleashed hatred and, as always, they do not forget to integrate the necessary amount of melodies.

Regardless of the personal taste of the listener, Dark Funeral have composed an album without major deficiencies and only those guys will disagree who feel the abnormal need to articulate a dissenting opinion at every opportunity. It is also true that "Angelus Thingamabob" does not reach the top position in the catalogue of the hellish ensemble. Nevertheless, those of you who want to close the gap in their Dark Funeral collection can buy this effort with a good feeling.