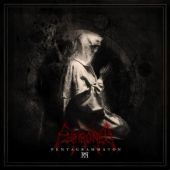 Equipped with two new band members, Enthroned started their eighth attack in 2007. Forget the useless introduction, Pentagrammaton begins to break out with the initial tones of the second number, the first regular track. Unlike Ancient Rites, their best-known native competitors from the beginning of Belgian black metal, Enthroned have never added symphonic, bombastic and pompous elements to their music. Although line-up changes have always given the band a new face, the sinister horde never stopped to play, breathe and live pure black metal. Pentagrammaton is no exception. The 42 minutes of ferocious rumbling stand in the tradition of the formation's former material and do not expand the listener's musical horizon.

But don't get me wrong. This does not mean that Enthroned have served a stale cocktail. They are still able to manage eery sounds (the beginning of "Ornament of Grace") and it is a matter of course that they are nearly always highly interested in rapid rhythms. Consequently, high velocity is an important feature on this album. Sometimes this fact leads to a little loss of dynamic, but this is probably rather the guilt of the production. Pentagrammaton sounds rather pulpy than very differentiated. At the same time, the mix can be described as more or less dull and flat. These are definitely no good circumstances in order to convince with new music. Well, Enthroned are experienced enough to score with profound compositions, regardless of the deficiencies of the technical execution. Nevertheless, the flawed production is at the expense of the album's aura. It does not develop an own character.

Given this situation, it is a pity that the guitar work does not deliver outstanding details in abundance. It appears as a crusty layer of blackness, solidly performed, but not blessed with an overdose of individuality. The songs rather form a swarm of killer insects. They are all dangerous, but you do not know which one is the insect that is biting you. However, at the end of the album, Enthroned break out of their opaque scheme. "Unconscious Minds", a monster with a duration of almost nine minutes, is the highlight of the here reviewed work. Clearly defined riffing, mid-paced rhythms that create a triumphant feeling, a calm intermezzo, powerful drumming and screaming lead vocals shape a monumental, pretty majestic piece. The directly following closer delivers the antidote: two minutes of hatred, an outburst of velocity and stomping heaviness. Anyway, the album does not belong to the jewels of the combo's catalogue. It is too good to be ignored, but it cannot hold a candle to their debut or Carnage in Worlds Beyond.