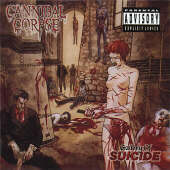 Buy on: Bandcamp
Type: Full-Length
Release Date: April 21st, 1998
Label: Metal Blade Records
Genre: Death, Gore
1 I Will Kill You
2 Disposal Of The Body
3 Sentenced To Burn
4 Blood Drenched Execution
5 Gallery Of Suicide
6 Dismembered And Molested
7 From Skin To Liquid
8 Unite The Dead
9 Stabbed In The Throat
10 Chambers Of Blood
11 Headless
12 Every Bone Broken
13 Centuries Of Torment
14 Crushing The Despised
MetalBite on YouTube

In aghast honesty, I've never been a huge fan of this band, but will say that I respect some of their work, especially this one. I like some brutal death metal which is what they represent - well established in the metal community for the past several years in existence. Gallery of Suicide captures their brutal death sound with chunk laden guitar activity whizzing all in various arrays of significance. From beginning to finish these guys hit home here with a solid, well put together album. They take their guitars and tune them down to B-flat, making that heavy, distorted sound with musical compositions that embrace you alongside Corpsegrinder's lyrical tyranny including a vocal onslaught.

What distinguishes this album from their previous others is the fact that it touches on major musical progression featuring compilations of sounds that include heavy palm-muted riffs with tremolo (fast) picking, tapping sequences on the fretboard, innovation of ideology in composing musical supposition and genuinely original extremity of idealization. Their earlier work featured more thrash-oriented licks alongside deeper vocals as there was a different vocalist (Chris Barnes) and they seemed to have experimented a lot; their first 3 albums were brutal death metal like this, but the musical style meaning their combining thrash metal guitar with death voice changed on The Bleeding and on here is different also. Not only did they change vocalists for the better, they thickened their whole entire sound.

The band I would say progressed, sort of regressed then progressed again especially on here. I didn't bother reading any of the current reviews of this album, just the ratings and my contention is that musically this album features something that is quite moving - a progression, not only with the music, but variation on the vocals as well. You get their thick and heavy sound which most songs here contain fast paced phenomenon, but also catch the listener off-guard with a slow instrumental. There is a combination of intensity, brilliance in the riff-writing, aggressive vocals spewing out gore lyrics, and drum-work that's tight which fits with the music as well as the final outro on the album.

Essence is key when writing successful albums -- here, Cannibal Corpse gives you that. The production quality was magnificent, and the music was entirely original. Taking influences on extreme music then conducting songs that seem to entice a number of listeners, making the fans look at brutal death metal in a whole different category... a category that is in a league of its' own. You can hear everything going on here including the guitars, the drums, the vocals and the sound in the recording came out triumphant. This is one underrated album. I don't see why the scores here are in the lower range because it deserves so much more. I'm not saying flattery, I'm saying recognition.

This one is NOT boring, but interesting. Lyrically it has no value to me, but musically it covers a heathen of dynamics and inspirational riffs especially for guitarists. This is one to own that will not, cannot be dull and if it is to that particular listener, then this band is not for you. The music on here captures all different avenues of musical triumph - originality, intelligibility, technicality and variety. I think this band with this album can inspire because the music is what is so owning to the listener. What exists in the brutal death metal community is Gallery of Suicide, a triumph in musical exploratory genius. These guys slay and this album should be owned by all fans because it's in a league of its' own!

I thought it was about time I pulled out some shit, and gave it the well-earned review it deserves. George “Corpsegrinder” Fisher and Co. certainly hit bottom of the pile in regards to “Gallery of Suicide”. I feel old George really is the missing link between man and ape, he really has learnt to grunt like a primate.

Death metal deserves better promotion than what these outspoken baboons attempt to grind with. Mutilating women with spanners and plungers is not a good lyrical topic, and will probably not invoke the kindest sympathies through the media. But of course this concept has not really occurred to these folks and thus you still have ‘GRRRRRRRRRRRRR...Behead the Innocent, pillage, rape and maim...GRRRRRRRR!!!!!!!’.

This is the second album recorded since the departure of infamous vocalist (???) Chris Barnes. Does this make a difference to the music in the slightest? No, of course it doesn’t; Cannibal Corpse sucked with Chris and they certainly suck with George. Music consists of grinding guitars, fucked ape lyrical content and vocals, and heavy drumming and bass work.

Please, however note, that if you do see this CD for $2 or so, pick it up as the instrumental track: ‘From Skin to Liquid’ is actually a promising piece of work. Cannibal Corpse are remotely talented, they just play a shit brand of death, grind metal. If they ditched George, and follow the footsteps of death acts, like Hypocrisy they may actually be okay one day. However presently Cannibal Corpse, now suck and as a result “Gallery of Suicide” is an atrocious effort.

Bottom Line: Cannibal Corpse are the biggest sack of rubbish I’ve ever had the displeasure of reviewing. The only reason “Gallery of Suicide” scored two and half points is because of the reasonable instrumental in the track: ‘From Skin to Liquid’. Absolute crap.