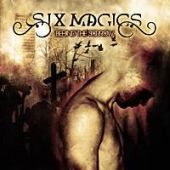 I cant remember the last time I had heard any Chilean music, metal or otherwise. I sort of have a sense that I have heard some at some point of time, but my memory is not what it was perhaps... Dang! Now that I have admitted that, I go on and review a band from Chile called Six Magics.

I was instantly struck by what this band’s sound right off the bat. Sounding exactly like what I wanted Nightwish to sound like from the beginning, while adding influences from Dream Theatre and even Evanescence ... Six Magics exploded out with this sound that was clearly rooted in Metal, yet has some forms of both Progressive Rock and straight ahead Rock as well.

The lead singer (Elizabeth Vasquez) shows that power and melody go hand in hand as the rest of the band (Erick Áávila on Guitar, Gabriel Hidalgo on Guitar, Mauricio Nader on Bass, Pablo Stagnaro on Drums) are equally as strong, making music that is as powerful as it is memorable. She makes an already stellar sounding band seem almost god-like as each song seems to live on its own.

I can’t even pick one song off the album that is best like I usually do... to make a firmer point: each track they have offered up on "Behind The Sorrow" is equally that amazing, with a purity that comes through with each and ever note that blares out from the speakers. They seem to exude that star quality while never selling out. Many bands have, but i'm just glad to see that some just do what they do best, and do it loudly.