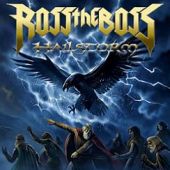 Founder of classic metal band Manowar and Punk band, The Dictators, Ross Friedman has decided to strike out on his own with an appropriately titled group called Ross The Boss. After a fateful day of performing with Manowar after 17 years, Ross received a call from the promoters of Germany’s “Keep It True” festival and was teamed up with singer Patrick Fuchs, bassist Carsten Kettering and drummer Matze Mayer.

So how would you describe Ross’s sound? It’s definitely not focused on old Manowar but more focused on an 80’s classic style of Heavy Metal with a little bit of influence from his old band. The second track is clearly Manowar influenced but Patrick’s vocals follow more in the direction of Hammerfall. 'Dead Man’s Curve' and 'Burn Alive' rings true of early Krokus and Saxon and are fun songs to rock out to while you’re driving in your car. 'Crom' and 'Empire’s Anthem' are the two truly unique tracks that break up the monotony of the constant mega riffs that border along the lines of being incredibly cheesy.

This is a far cry from a Manowar rip-off but even if it was, who cares? He founded the damn band, right? “Hailstorm” is not completely my cup of tea but Manowar or fans of Classic Power Metal will definitely want to pick up a copy!