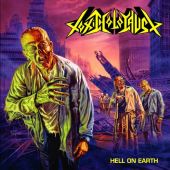 A typical Repka artwork, primitive song patterns and a playtime of less than 28 minutes build the cornerstones of an album which reflects the approach of its spiritual father to more than hundred percent. Toxic Holocaust are totally clear about the way they want to go, and mastermind Joel Grind gives a shit about people like me who timidly ask for a minimum of diversity. He has created the entire album single-handedly and therefore its monolithic overall appearance does not come as a big surprise. All songs pummel the listener with aggressive riffs and leads. Grind plays metal but conveys punk vibes due to the primitive, absolutely straight tunes he spits out. Sometimes he seems to be the - very raw - re-incarnation of early Nuclear Assault. Too bad that he does not have this instinct for riffs that last longer than the songs they form. Grind creates an avalanche of powerful and mostly good riffs, but as soon as the avalanche has reached the ground and one have a clear view again, everything is gone. No, there's not much that keeps sticking in the ear. (By contrast, the choruses of "Stranded in Hell" or "After the Holocaust" are haunting me for more than three decades.)

However, Hell on Earth does not hold lukewarm or half-baked tunes. They are effective as long as the album is running. The constant focus on high velocity kills some percent of the dynamic, but that's no big deal. The fact that Grind exactly offers what he wants, likes and is makes up for the uniformity that characterizes this work. Yes, I miss a couple of outstanding highlights, even though the riff of "Arise from the Cemetery" or the chorus of "Thrashing Death" sound very promising. However, I cannot blame the artist for fillers as well. Honestly speaking, I ask myself how long it takes to write and record such an album with the aforementioned running time. Probably 29 minutes, that's enough time to play the tracks and to have a piss break after the tenth beer. On a more serious note, the songs really boast with their spontaneity and I am sure that Toxic Holocaust can destroy every stage and drive every crowd wild in a matter of minutes, but on the next day, nobody will remember a single note.

At the end of the album, Grind plays two guitar solos. What a poser (little joke). Fortunately, the punk vibes and the apocalyptic destructiveness remain unaffected. The very solid and somehow glaring production fits this musical content very well. No doubt, Grind's holistic way of proceeding comes to fruition. Given this situation, I can recommend the album to all those of you who want to experience a musical bloodlust with monotonous, nearly absurdly reverberating vocals, straight drumming and harsh riffs. Just be aware of the fact that there is nothing new to discover when playing the album for the second time. Toxic Holocaust present all they can present immediately, anything else would be just a waste of time in Grind's opinion. While doing so, he is aligned with the cover artist and his unmistakable artworks.