Neter comes from Spain and they bring some high quality, traditionally brutal and (at moments) technical death metal with them. With three albums under their belts and newest being only months old, there were questions needing answers. Andrés Rosales (bass) was nice enough to answer all of them so sit comfortably, click on the 'play' button and get to reading. 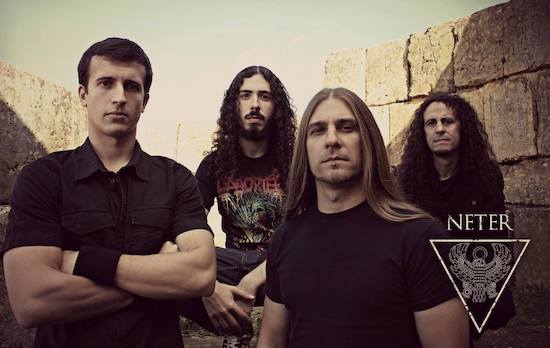 Spain was always a place where I wanted to visit and explore. Tell me about the area you live in. What kind of places would you recommend to visit?

We live in the south of Spain, in a city called Seville. It is the fourth most populated city in Spain, and one of the most visited by tourists. Fortunately, we live in a very beautiful city with famous places like La Giralda, El Real Alcázar and Plaza de España. Walking through the streets of El barrio de Santa Cruz or on the banks of the Guadalquivir River and tasting our varied and rich gastronomy is delightful. There are plenty of things to do here, but we also recommend a trip to Granada to visit La Alhambra. You will love this city. We strongly recommend visiting Seville because you would really enjoy your time here, but I have to suggest avoiding coming in summer. Spring is an ideal time to visit the city, but in summer the temperatures are extremely high, and it is unbearable to go outside.

What kind of scene do you have over there, is there a lot happening?

Some years ago we had a good scene, but nowadays we sadly have to say that the scene is getting smaller and smaller. Young people don't seem to be interested in metal music, and the attendance to concerts is decreasing. We do not know if this is something that is happening throughout the country, but in this situation we have been forced to seek our audience outside of Spain, and we have found great support in countries like The United States, where fans continue to support the bands buying music in digital format.

Let's talk about your newest album, was it a blast working on it, how was the whole process?

We enjoyed the process but it was very tough too. We forced ourselves to complete the whole process in less than two years, because we wanted to take advantage of the success of Idols, and we needed to work very hard to achieve it. We don't make a living with our music and we have jobs, so the time we can dedicate to Neter is limited. But despite the difficulties, we got the right the songs on time, and we are very happy with the result.

Did you find yourselves employing anything from the first and second record onto the new one?

We don't usually recycle anything from previous albums. When we started to write Inferus, we didn't have anything written yet, so we started from scratch. We see an album as an independent ensemble with its own entity, and recovering old discarded songs can affect negatively the result.

Was there anything that influenced you differently while composing; were there any non metal influences that surprised even yourself?

We listen to a lot of music of many different styles, but our main influences come from extreme metal groups. We are not afraid of including new aspects in our music, and we like to try new formulas, but Inferus is more like an evolution from Idols. We wanted to add some groove and more variety but keeping the same essence. We had a very clear concept in our minds, and we wanted to add more personality to the new songs, but we have avoided big changes in our style.

Which song gave you the most trouble and why?

Without a doubt, the song that has given us more headaches has been 'Atlantis of the Sands'. We didn't finish writing this song until day before entering the studio, and even after finishing the recording, we considered removing it from the set list. Finally, we didn't eliminate it, but we decided to cut a part of the song, and paradoxically at the end it was one of our favorites - as it is for many fans.

Which one was a breeze to finish and record, why do you think that was?

Unfortunately, no song has been easy to write or record. Technically, some have been more difficult than others, but all of them have at least one detail that has been a challenge for us. 'Blazing Fallout' is a slower song, and it has probably been the easiest one to record, but it also has a quick passage with difficult wrist movements. Whether in a technical or a compositional level, in every song we always try to step out of our comfort zone because it is the best way to evolve as musicians.

What do you consider the most important element in creating your music, is everything buttoned up when you go in the studio or there is still room for a little improvisation?

We have sometimes made little changes during the recording of an album, but we prefer to prepare everything as much as possible. Before entering the studio, we always record a homemade demo of the entire album because it allows us to make a good review of each song. Spending time in a studio is very expensive, and there time to record is very limited, so we must be as prepared as we can. Anyway, even if we had limitless access to the studio, it would make no sense for us to improvise. The way we write music is not compatible with that. We like to write concept albums and giving every song a meaning and it is not possible to do so improvising in the studio.

We worked with many concepts throughout the album, and we considered different options, but finally we wanted something related to the temple of Göbekli Tepe. We knew the theme we wanted for the cover, but it wasn't an idea that we had developed too much, so we left that job to the designer. We called the same artist who made the cover of Idols, and he sent us different sketches using a very similar style of drawing and colors to Idols. It made sense for us because we wanted to reflect the relation of Inferus with the last album, so we decided to work with him again.

All the artwork from Inferus has been made by Daví Orellana. Daví has worked with us many times in the past, and we are very close to him. We love to work with him because of the quality of his work, and because he usually adds a meaning to every detail of his drawings. Everything on the cover is there for a reason, and that reason is something related to the lyrics, and that’s why we are so happy with the result. We talk about different civilizations in the lyrics, but the temple of Göbekli Tepe is the most representative symbol, so that had to be the chosen one for the cover.

I don't own the album so can you tell me about the words a bit, what are they about, what topics or themes can we expect to find on Inferus?

Inferus is like a journey through history in which we talk about how different cultures have faced their own disappearance and, in other words, their own death. Many primitive religions worshiped death like a god, and we have referred to death the same way in our lyrics. So, it would be as if that deification of death was behind the end of civilizations, and mankind venerates it because they fear it. We prefer not to express these ideas explicitly, so that’s why we use metaphors and symbolism to tell these stories.

In your opinion, which song from the new album is the best representation of it?

We had a long debate to choose the song that best represents the album, and we didn't know which one to send for the promotion. 'Primordial Entity' is a very powerful song and it has a very recognizable guitar riff, but it is too different from the rest of the album. 'The Pillars of Heracles' and 'Rebirth Of The Overthrown' are killer songs, and we could choose any of them as the single of Inferus, but finally we decided that 'Faceless' is the most representative because of the lyrics and the potency it transmits.

Which one seems to work out best in the 'live' setting?

In the shows we are playing the album almost completely, and they are all working quite well. 'Triumphant March' is still the most claimed by the people, but songs like 'Faceless' or 'The Pillars of Heracles' are standing out above the rest.

New album has been out for few months now. Response has been good from what I see. How does it feel to know you did well, what is the best thing and the funniest you've heard about the album so far?

We are very happy with the feedback we are receiving from the fans and the media. Sales are going better than expected, and we are reaching a lot of people thanks to the good promotion of our labels. It is comforting to see that we are doing things well, and that we are on the right track. We still have a lot to learn and improve, and we have great aspirations, but we are enjoying the process which in the end is what matters most. It's very easy to choose the best and the funniest thing we have heard about Inferus. We have read in some reviews of the album that we are probably the best Spanish metal band, and although it is a very daring consideration, it is one of the best compliments we could receive right now. And the funniest things we have read are the references to the phallic form of the pillars of the cover. It seems that many people have a slightly perverse mind, and can’t avoid making the comparison.

Thank you for finding time to this interview, good luck with everything. Last words belong to you.

Thank you very much for your support, and thanks for making us this interview. We also want to thank our fans for the support we are receiving, and we can't wait to see you at the shows.