Cadaverine was one of those albums last year that I simply couldn't get enough of. Slow, crushing, evil and putrid. It gave me everything I wanted and while working on this interview I probably listened to it another 20 times. When I had a chance to talk to the guys I didn't hesitate. Here is how it went. (Huge thanks to Arek for the help with the interview \mm/) 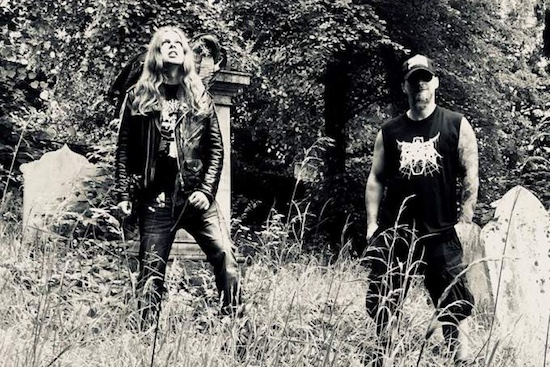 Greetings, how is Eternal Rot doing right after the release of "Cadaverine"?

Mayer: Hello, Eternal Rot is in form. Rotted and excited about the Cadaverine party and ready for further decay.

Grindak: It's been over a couple of months since the premiere, album (and shirts) have already sold out, we are quite well, and we are slowly creating new petechiae.

"Cadaverine" is 4 songs only, but maybe that's even better, that there's no more (laughs), how and where such rotten and sick sounds develop?

M: In my opinion, it's good that there's not more, this type of music at a slow pace should not wear the listener out. In the case of our demo, all the material was created by us in so-called Tomb of Eternal Rot, which would be my house. I did everything there, including mix and mastering. Grindak did the lyrics, invented the name, etc. In case of Cadeverine, everything was also recorded at my place with the vocals of Grindak, but the mix and master was done in Satanic Audio Studio. New material, which already is in an advanced stage of rotting and started to reek nicely, will be tinkered with in a different way, i.e. we will try to re-amp the guitars, we are interested in the sound of very cult amp Sunn T, a model that I think wrecks the walls.

Eternal Rot is kinda like a new corpse crawling on the surface (laughs), could you introduce the band to us, maybe some memories, anecdotes, etc.?

M: None of the interesting anecdotes come to my mind at the moment. We've known each other with Grindak for many years, we met at concerts in London, where we lived for many years, now we live in two different cities; Grindak in Bedford and I in Watford. We set up our brew drinking meetings halfway up, in St. Albans, where a mini photo session to the Cadaverine took place at the local cemetery.

G: We are just ordinary rot bums enjoying heavy music, we go to work, we have kids, we try to embrace this madness called life and still steal some free time for the band. Mass number of going to concerts together and talks about music brought us a bit closer because we like a lot of the same things. Probably there would be a lot of anecdotes if we could remember them all because the best things usually took place as we were already 'in orbit'. I remember pleasantly our joint trip to Spain for two concerts as part of the Funebrarum and Undergang tour in 2012, I am glad that we returned from it without losing any colleagues nor our health.

I am absolutely sure that I wasn't the only one who's jaw has dropped because of the sound you obtained on the "Cadaverine", congratulations gentlemen! Where did it come from, whose idea and who is responsible for it?

M: Thanks. My home pre-productions of this material were very close to what came out from the studio, the sound of guitars and vocals is 90% of my doing. The sound of the drums has been quite audibly changed in the studio from acoustic to more mechanical, which gave it an industrial atmosphere, we liked the sound and it remained so. We might experiment a bit more with the sound on the new material.

The corpse that emerges from the grave steers my imagination in a certain direction when it comes to lyrics, but just to be sure, I will ask: what are you growling about and who wrote these stories?

Grindak: Rotting zombie is Mark Riddick's idea, but it fits perfectly into the climate that we wanted from the very beginning. The vocals in Eternal Rot are another instrument that is supposed to dig graves and act on the imagination. The lyrics are an addition, but when we have decided that there will be lyrics, it was important to me that they were not just a mixture of words that mean shit, only stories that would fit the music and help in painting the appropriate images in the twisted minds of listeners. There are Lovecraftian climates, there's gore, there's putrefaction, fascination with death, loss of the mind and getting lost in madness - just death metal vibes. I'm not over trying to be original in this topic, but I want it to have hands, legs and even a head with a hole. I am my own biggest critic in this topic, so if I'm happy with them, there is a good chance that they will be satisfying to somebody else too.

Since I'm already on the subject of the cover, I heard that there were some problems with it, but as I see, no harm no foul ... How was this disgust created (laughs)?

Mayer: Exactly as you said, "there is no harm…". Initially, the cover was to be done by Rafał Kruszyk, who was also the author of the cover on our demo, but at some point, he withdrew without informing us. We wrote an email to Marek and after a few days we already had graphics presented. Such a short story with a happy end.

Though you are Polish, now you live in England, why did you decide to entrust your monster to Greg from Godz Ov War, and not to someone from the island?

Mayer: Our place of residence did not matter, GOW releases bands from different parts of the world. If we were a live band, maybe it would be important, because the local label could organize more live shows in the local yard. We just wanted to deal with GOW because it is a solid underground label and we are satisfied with the cooperation.

Grindak: Fortunately, the search for the publisher ended when it started, because Greg was the first and only person we hit.

There are only two of you in the band, but you pulled it off. Even these artificial drums do not interfere with music, they even add to this slightly industrial climate. However, I have heard that there have been some changes, right?

Mayer: Yes, some changes have happened, i.e. there are plans. Radek Pierściński will probably record drums on the new material, we will see how long-distance cooperation will work without rehearsing together.

Was the new Eternal Rot logo the source of these changes? I know that Radek has been fed with the rot from early childhood and nothing dead is alien to him, but what, how and why? Are there any fruits of this cooperation?

Mayer: I met Radek at the Voivod and Necrophagia concert in London, but I knew before that he really liked our demo. A few months later, we asked him if he would like to change our logo and he agreed. During our correspondence, Radek offered that if we needed help with drums, he would be happy to help. The first guitar tracks for the new material are already with Radek, so something is going on.

I know your approach to the theme of touring, but if somewhere, someday the right people would appear, would you give the band a chance to play a gig?

Mayer: The offers have already come to play shows in Belgium and Poland, but we will not change the decision, it is simply impossible so far.

Grindak: I do not see it, at least not now and not in the near future. If we lived closer, had much more time and local people for bass and drums, maybe it would make sense, at this time though, there is nothing to talk about.

Even Brutal or Obscene???

Understood, subject closed and let's return to the album; the premiere is behind us, and "Cadaverine" seems to collect only the positive notes. Is this the right time to drink? But seriously, did you expect such reaction?

Mayer: There is always a right time to drink (laughs), we drank to it 2 times already and every time we will meet, we'll be drinking some more, (laughs). We did not expect such reactions, especially me. I am very strict about our recordings and I am constantly looking for a hole in the whole, and probably that's why a five-year hole between the demo and the album was created.

Grindak: The reception knocked us under ground a bit, but we were lying there already, so that's obviously nice. It is good to reach similar maniacs, who know what we mean and feel such playing, it is important.

Maybe a bit too early for such question, but are there any plans for 2019 and a little further future?

Mayer: I already have four skeleton corpses of new pieces so for my part I have to finish playing around with them to the end of July of this year, because later it may be hard since my partner is pregnant and with two small children in Tomb of Eternal Rot it may be unbearable to handle (laughs).

Thanks for your time, I hope our brief chat will spread your rotten plague.

Mayer: We thank you for support. Greetings to all the rotting. Drink the venom of the dead!

Grindak: Sorry for decay, written interviews are probably not our strongest side, to get to know us best, better to fire up the album until the blood flows from the speakers and then crawl under the rug. Cheers!