Nocturnal Hollow come from Venezuela but that is about to change. Internet shows that they released 2 EP's, but did they? How long does it take those guys to compose and record their music? What labels are going to release their new album (yes, you've read it correctly 'labels')? Answers to all these questions, tons of other information and much more below. Tomek was curious and asked, JR Escalante was nice enough to answer.  Dig in. 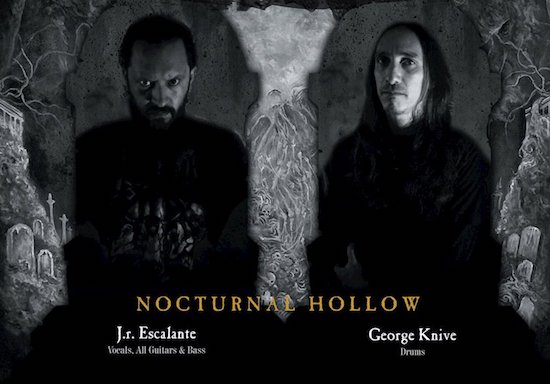 Thanks for taking time to do this, usually while conducting an interview with someone from a different country I ask about vacation spots, but at this moment Venezuela is not exactly a vacation destination. How is the situation over there at the moment?

We have a serious political and social crisis, thanks to a few criminals who run the country. Since the arrival of socialism (a shitty communism) we have arrived at this situation, it's hard to believe that this is happening in 2019!!! Venezuela, being one of the richest countries in Latin America, succumbed to this decline of disorder, corruption and poverty. But we have the change very close... very close, it's just about time. These communists ran out of money, international support and most important, the support of the people, they are trapped and fucked. We will rise again among the ashes to be the powerful country we used to be. That's for sure.

Is it safe to be in in Venezuela right now, how is it where you live?

Venezuela is a beautiful country and people, it is safe, but just as other countries have their wild side of crime, each state has areas that have to be careful, but we already know the system and we know where to enter and where not.

How are you dealing with what's going on as a band?

A lot is happening. I'm moving to USA to get the band together in Florida this year and go further with our music, planning in mid-terms a future tour in USA and Europe. Also, we started as a trio, now we included another guitar player, so it's a lot of "What's going on as a band". We hope to make all our plans come true.

Stay strong guys and be patient, it has to get better eventually. Let's talk about music and the band. Here's a question that is going to be your worst nightmare for the years to come (laughs) - what is the story behind the name of the band, what is Nocturnal Hollow?

It's just a name, nothing special, everyone assimilates it as they want, for us it refers to the deepest abyss of blackness.

Release of the new album is approaching swiftly, how is Nocturnal Hollow right before the big date?

Very enthusiastic! We have great support of our labels, Redefining Darkness (USA), Raw Skull Recordz (Europe) and Blackstorm Productions (USA & Latin America). Little by little we have been climbing higher in terms of diffusion and publicity, making our music sound all over the world. We have a long road to go… a lot of things to do as touring in the USA and Europe.

Are you preparing anything special for the big date; will there be a video for any of the new songs?

We hope to have our official video for the presentation of our second single, as for the first single ("Coming Back to the Grave") there will be a lyric video. Many plans, many surprises.

As for me, the new album is a complete knock out! After the first listen I felt like I was a training dummy for some big UFC dude. In your opinion, which song from the new album is the best representation of Nocturnal Hollow and the new album?

We always try sounding same or better when we play live, it is very important to us, so what you get in the record is what you get live. There are bands that perform a super production in the recording session and then when they do a live show they do not sound the same. We try to do things very simple and direct, nothing fancy or elaborate. Particularly, I identify with the whole album, really like this album. I could mention my favorites "Coming Back to the Grave", "Trapped in a Coffin", "God of all Deaths".

When you were writing material for the new album did you have a clear idea of what you want it to be and what you wanted to achieve, was it somewhat stressful or was it more of a loose and relaxed approach, where everything comes out in practice room and you just hang out and work on new music?

Almost all our albums were composed in less than 1 or 2 months. When we come to the rehearsal room, I bring a couple of riffs and the songs just come along. For example, this last album A Whisper Of An Horrendous Soul was composed in 3 weeks, all 10 songs (Drums and Guitar). It's something that just happens this way, we are quite dedicated when composing an album. Basically it's like that, we follow the inspiration of the moment and we do not stop. A couple of years ago we recorded an EP Demonical Euphony; we went to the recording studio, we did not have anything in our minds, so we made 4 songs and recorded them that same day. George Knive (Drummer) and I make a good team, we have been playing for 20 years and we know the formula. Our inspiration is basically all those classic metal groups like Slayer, Venom, Celtic Frost.

Sweden has a long history in death metal and some could say that Nocturnal Hollow sounds like it came from over there. Was it something you guys planned on, how did it come about?

I've always liked the European death metal, bands like Celtic Frost, King Diamond, Mercyful Fate, Venom, quite a lot of punk rock. I worship Entombed and Dismember since the beginning. I also admire bands like Darkthrone, they make music with the heart; raw stuff and very honest music. So, it came up on its own, we wanted to compose something simple, direct, raw - and our music emerged. We started to use the Boss HM2 in the middle of our career, exactly in the recording of Deathless and Fleshless. We are not discovering the warm water, we only play and sound as we like and enjoy. 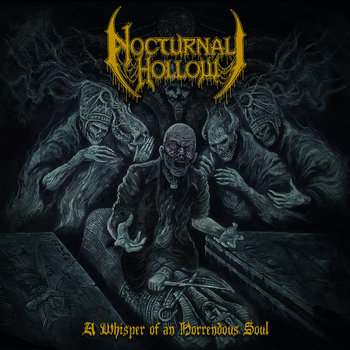 I want to ask you about the artwork a little bit. Both EP and two of the previous albums cover could almost create one big artwork, but the new cover is different. Is there a significance behind the change, what made you decide in the new cover?

Well, we really only have one EP that is the Demonical Euphony, I do not know why the networks spread the information that we had another EP, I think they call it Fleshless and Deathless, but it's a mistake, there's no second EP. As for art - we have always had the talented John Quevedo Jansenss. We've been friends for more than 20 years, I give him ideas of how art can be and then I give him all the freedom to do the rest. I think the artist has to be given enough creative freedom so that he can utilize his talent at for the specific job.

What is the story behind the new one and the title?

I'm going to tell you a true and creepy story. It did not come from a very pleasant experience; for a while it was very difficult for me to sleep regularly, I slept 3 hours max for the past 6 months, I heard voices at night, between 3am and 4am … I don't know if it was just my imagination or something but sometimes my daughter got up at night listening to the same thing, some whispering. True story, it was very creepy, so I came up with the idea of ​​putting that name on the album A Whisper of an Horrendous Soul.

This is an artwork that John Jansenss a I create. I give him some ideas and he did the rest. The artwork refers to a priest being possessed while some demonic entities are spelling some enchanted whispers to take his soul and bring him to helllll and sufferrrrr (laughs).

I'm kind of guy that likes to read the lyrics when listening to the album but unfortunately none of them are available to me at the time. Tell me about the lyrics on the new album please, is there a common subject, who is responsible for lyrical layer, what stories are you telling us on new album?

The lyrics are about horror, death, murder, and witchcraft. I try to put the lyrics as a portal for your imagination to visualize a horror movie while you are listening to this rotten sound of raw chainsaws. Trying to put a story behind each song.

Getting you music on physical format is next to impossible, will anything change when new album comes out?

That can't happen anymore, as you know, the labels are responsible for the distribution and advertising of your material, I hope this time we can spread our work in places where we have never been heard before. I'm very confident that our labels Redefining Darkness, Blackstorm Productions and Raw Skull Recordz are able to do that. We are in good hands. These labels will be the ones to take our music to all corners of the world and advertise in all underground metal media.

Album sounds and looks really good, so congrats on a job well done. Thank you for taking time to answer all the questions. Last words are yours.

Thank you very much for the opportunity and inviting us to do this interview. Thanks all the readers for these minutes dedicated to knowing the band more. Grateful for your support. We need to take our music beyond our borders and this interview means a lot for us. Long live Death Metal!