Having a chance to premiere Left Hand Path's first EP we decided to do a quick interview with the band to introduce the group to you peeps. Unfortunately, we didn't make it in time to post two together but better late than never as they say. Tamás Wagner answered all the questions and if you are interested in discovering new and awesome bands here is the one to check out. Big thanks to Adrian and Loud Rage Music for the opportunity of a premiere and for all the help with the interview. Play ON, read, head bang and support!!! 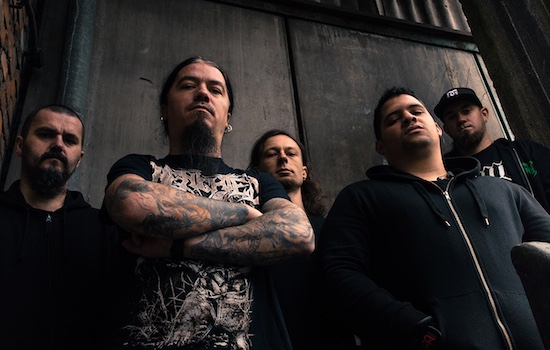 Thanks for taking time to do this, how are things in Left Hand Path camp right before the release of your first EP?

Hey, of course, our pleasure, thanks for having us. We're doing great, obviously very excited about the album close to launching. It was a long road, it took a lot of time to arrive at the stable lineup we have now. Signing with Loud Rage Music was a huge step, and it hyped us up even more, so it's really nice to see everything falling into place finally. We can't wait to hit the stage, as lately we've been mostly busy in the studio.

Here's a question that is going to be your worst nightmare for the years to come (laughs), what is the story behind the name of the band, does it involve a Swedish band that we all know and love?

Haha, yeah, we tend to get asked that a lot. While Entombed's album had nothing to do with our choice of band name, it's nice that many people take it as a tip of the hat towards a really iconic masterpiece. For us it's all about staying true to ourselves, trying to walk our own path instead of tagging along on someone else's journey. It represents freedom of thought and of spirit, and also taking responsibility for every step we take along the way - it may be the road less traveled, but it's ours.

Can you tell us more about the band since you're kinda new on the market (laughs), introduce the band to us, maybe throw in some memories, anecdotes, etc.?

The band was the brainchild of our dear friend Edi Covacic, a very talented guitar player and absolute gear head. He and Atti (Attila Szenasi, bass, ex-Negura Bunget) joined forces many years ago and spent a lot of time looking to complete the formula. José Morales (ex-Marchosias, ex-Dark Aevum) quickly occupied the drum throne, so the band was up to a three piece, working on the first songs. I myself (Tamás Wagner, guitars) was called to join the fray by Atti through Malpraxis, the brutal death metal band we played in together, and I not much later I brought my closest friend, András Ádám (guitars, ex-The Hourglass, ex-Toy Machines). After Edi moved away a few countries to the west of us, and Cristi (Cristian Aionese, ex-SkullP, Malpraxis) agreed to take on the vocal duties with his awesome wide range of brutal voice techniques, the line-up became the one we have today, and hasn't changed since. As far as memories and anecdotes go, between having the cops bust us while recording drums at José's apartment and laughing our asses off over Simpsons episodes with Odd Crew backstage, I don't even know where to start - it's always a fun and wild ride when the gang is together.

Let's talk about your EP, how long did you work on it and how was the whole process?

Part of the songs were from the ones Edi wrote, so they go way back, but after András came into the picture the two of them really hit it off as far as composing goes. The songs born after Edi left are the product of András's wonderfully inspired, twisted musical talent. The rest of us filled in our parts, and soon enough we had the material ready. Cristi wrote all of the lyrics, except for the song Left Hand Path, which I wrote, trying to hammer home the point about what the band's name means. Recording spanned a long time, almost a year and a half, and we had help from some amazing people along the way, starting from Edmond and Jimmy, Atti's former bandmates from the mighty Negura Bunget, and Andrei Jumugă, Doru Căilean from Whispering Woods, and Sebi Damian from High Status. We recorded in a bunch of places, including most of our apartments at some point, but in the end Sebi really pulled everything together nicely during mixing and mastering at LiveSet studios, and we couldn't be happier with the result.

What can head bangers expect when they press play button?

We've been called anything from technical death metal to Gothenburg, though we like to think that we play extreme progressive metal, extreme on account of the vocals if nothing else, and progressive since András's mind refuses to produce anything that fits the standard chorus verse chorus pattern – or even keep the same time signature for too long.

Most of us have recorded before with different bands, but it was a new dynamic for all of us to be working together on this album. We did the recording across a long span of time and in many different locations, many times during long weekends, or at night after work, so it was definitely very demanding and tiring, but all in all it was a labor of love, and we are proud of the results.

Musically András is the main driving force of the band, but we all do our part, usually together at rehearsals. He gives the outline with more or less of our duties being laid out clearly by him, but always allowing us our creative freedom to leave our mark on each song as we see fit. We all contribute and that's what makes it a pleasure for all of us to play in the end.

I'm kind of guy that likes to read the lyrics when listening to the album but unfortunately none of them are available to me at the time. Tell me about the lyrics on the new album, is there a common subject, who is responsible for lyrical layer?

The lyrics cover a broad canvas of themes, from man's destructive nature and dangerous recklessness, to psychological struggles and even mental illness, but also social critique and even visions about the future, with more science fiction themes like artificial intelligence and the perils mankind might face in times to come. Cristi was the core writer for the EP, having written the lyrics for all the songs except one, "Left Hand Path", which was the first song where the guys gave me a chance to put pen to paper.

It's so difficult to answer such a subjective question - we never agree to put lyrics to a song unless we all gravitate towards the content to some extent, so I'm confident in saying we like all of them. I personally am a big fan of the first song, "The hole in man", which Cristi wrote based on a theme suggested by András about how mankind is consuming its environment, much to both of their demise.

In your opinion, which song from the new album is the best representation of Left Hand Path and your music?

Here I think we'd all agree that the title song, "Left Hand Path", is the clearest example of what we stand for. It's the song which hit the hardest at every single live show we played, and the one we got the most positive feedback for - I think because we each got to add a bit of our own flavor to it. Musically and thematically as well, it's the song that stands out from this first album - or at least that's how we like to think of it. 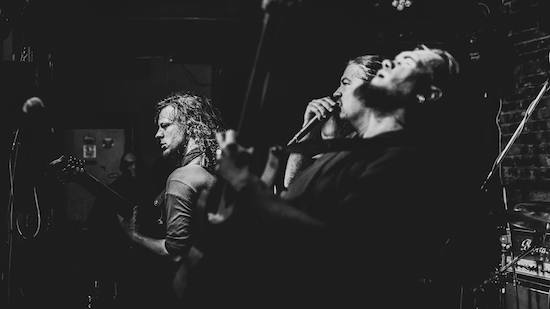 We had a lot of different ideas, but the theme that stuck with us throughout was the duality that we see everywhere around us: left and right, light and dark, good and evil, life and death - we looked for many ways to symbolize these opposing elements. Another interesting symbol we wanted to use was a so-called hand of glory, an esoteric artifact, crafted from the severed left hand of a hung man turned into a candle, wielding the power to open locks - you'll see all of these nicely brought together in the cover art and booklet of the album.

Whose work do we see on the album cover, how does it correspond to the lyrics and music? What is the message behind those plants?

We tried working with a couple of different artists, but the real breakthrough for us was when we got into contact with Alexandru Daș. He is a very talented designer, and once we've seen what he did for Ordinul Negru, a fellow band on the Loud Rage Music label, we knew he could capture the dark, esoteric feeling we were after visually. He did not disappoint, it was a pleasure working with him, and we all love the way the graphics for the cover and the booklet turned out.

I think in many ways it turned out a bit different than each of us expected, but for the better - I think it's a sum of what we each wanted it to be, and thus it became something much more than any single one of us imagined. In any case, we are all very happy with the way it turned out, both visually and in terms of sound.

I guess the difficult thing was just the logistics of it all: writing and recording an album takes a lot of time and effort, which means working late hours, sacrificing time away from our families, friends, taking time off from our jobs. But as far as working together towards a common goal, I think we all found it a challenge we gladly accepted, and we enjoyed doing it regardless of the difficulties.

Will you follow the release of the album with some touring; are there shows on the agenda, anything scheduled?

We have no specific agenda yet as far as the near future goes, but of course gigging as much as we can is our main priority. We have a couple of shows in the works, the nearest one being a show in our home town of Cluj-Napoca, the official launch event for the album, after which we'll see just how much we'll manage to fit into the rest of the summer - as I said, we can't wait to hit the stage.

Thanks for your interest in the band and our debut material. As long as we have the last word, I think it's fitting that we give a shout out to everyone who gave us a hand getting this far - the underground community is very supportive, and we've been lucky to have so many talented and kind people offer us advice, time, and assistance - we appreciate it all, and hope you will enjoy the resulting music. After all, the music is all that matters.