Quite recently I've had a pleasure to listen to Omophagia's upcoming album, "646965". You can read my thoughts in the review. That again brought my attention to one of my favourite labels - Unique Leader Records. Maybe this album is not a typical slam stuff that I like the most, but oh boy, it was good fun listening to it and watching their recent video for the title track. I strongly recommend watching that video, reading my review and then finding out how nice these guys are, answering all of my questions below. Enjoy! 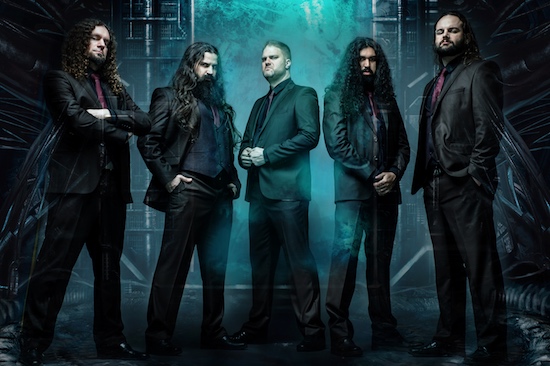 Could you please provide some short story on how did your band come to life?

Beni and Henrique started the band in 2006 when their former thrash metal band split up. They really wanted to play death metal as their heroes were bands like ‪Cannibal Corpse, Monstrosity, ‪Morbid Angel and so on. So, they went to that direction and started to compose songs.

Your description says that you are Brazilian/Swiss band - which of you is of Brazilian descent?

Henrique originally is from Brazil and soon after they got to know another Brazilian guy called Rafael that took his duties on bass. Soon after other members were found and Omophagia got a complete band in 2007.

How did you come up with the band's name?

The name Omophagia derives from Greek mythology and means devouring of raw flesh (also the name of the first demo). We came about that name by chance and there wasn't any other band with that name, so we took that one.

Since releasing your demo in 2007 you started playing with big bands like Keep of Kalessin, Morbid Angel and Kataklysm. These shows had very good reception from the very start. What was your idea for the live show to have so much energy? What is your recipe for a perfect show?

Yes, we were lucky to have a good response quite form the beginning although it wasn't easy for us to step out of Switzerland for a long time. We are very happy to be where we are now but still trying to improve every day and work on our skills. We don't have any certain "recipe" for a perfect show but if we are happy with our performance and the people like our show then we are happy too :-)!

First two albums mastered and mixed at Hertz Studio in Poland - why this studio? The new album shows quite a shift in the band's sound, I've also read that you decided to change where it was recorded, mixed and mastered - Kohlekeller Studio (Recording & Mix) and Tom Porcell (Mastering). Could you also say something about the reason and how different was it from previous two? Are you happy with the result?

There is something important to know to answer this question properly: all the recordings in the past were recorded by us (the demo was even mixed by Beni). We always liked the productions of Hertz Studio and from the second release (the first album, Guilt By Nescience) we reached out to Hertz and asked them to mix and master it. And they did a great job on that.

We did the same for our second album (In The Name Of Chaos) but for the recent album we wanted to change our workflow and to record everything in the studio. The reason why we changed the studio is quite simple: we love the productions of Kohlekeller as well and it was much easier to head to Frankfurt since it is much nearer for us.

We think that was a good decision to record and mix it in the same environment (at Kohlekeller). The work on it was much more professional and relaxed than recording it by ourselves. And we think the result speaks for this change: we are extremely happy with the production of Kohlerkeller! We also want to mention the awesome mastering of Tom Porcell. Everybody did an amazing job on this album. We hope you guys like it as much as we do!

New album "646965" - how and when was it composed? Are you following the same creative process? Is anyone in the band the main composer or are you sharing these duties?

Vocalist Beni has a small home studio and we went always there to compose our songs. Actually, we started to compose the songs for this album already in January 2016. During this process we always tried to put new things in every song, things that we haven't played before, new technics and rhythms. But the most important thing is to keep it sophisticated, brutal and catchy in a death metal way. So as already said we are always trying to introduce new things and not to follow the same creative process as in the last album. Henrique is the main composer in the band and the answer above was written by him.

What are your inspirations? Are you trying to become perfect in the current style you're playing or are you still in search for your artistic "comfort zone"?

My inspiration is to learn more new things and technics in every album. So, if you like our music you will find in every album something new. I think that keeps a band interesting for listeners. We don't change our style we just improve and put some special adjustments as a fine tuning.

I've seen quite a lot of strings on your videos, 6-string bass, your guitars are also at least 7-string guitars if I get it right. Could you share some details about your equipment? Which brands are you playing on in the studio and what are you taking on tour? Do you customize your instruments in any way?

Mischa: I used to play a 6-string Ibanez JS100 on the previous records. On the new album I play a 7-string guitar, the Agile Interceptor Pro 727. On stage, I use the EVH 5150 III 15W which is very small but sounds like a beast. Especially on tour this size is incredibly practical. For my effects I use the Line6 Pod HD500X.

Henrique: I play Dean guitars and the same EVH amp like Mischa. That's all!

I understand that currently you're promoting new album on tour, playing with Nile and Hate Eternal. Are you playing the album in its entirety?

Yes, we'll release the new album on September 6th and immediately afterwards go on European Tour with Nile, Hate Eternal and Vitriol. We will play a lot of new songs but not the entire new album

How do you prepare for your shows? Are you wearing suits?

Yes, we wear the suits on stage. We have brand new suits which differ slightly from the previous ones.

No reveal yet about any special effects or show details ;-) So you should come and check this out.

Are you composing any new material in the meantime? It's been 3 years since the previous album - does that mean that most likely the next one will also be released 3 years from now on? Is there any pattern of frequency at which new ideas start popping up in your heads so that you can begin crafting a new release?

Henrique: Well, I cannot control when I have good ideas, but to get good ideas for a song, I need to be already in writing modus. Mostly it happens when the band is not happy with a song, then we put it aside and resume it later. That means that after composed a couple of songs I get better and more creative.

Thanks a lot, and hope to see you soon!