Birthed in the dirty domain of Denmark's death metal dynasty, Chaotian arrived coughing celestial contaminants and spewing tumorous elements of eradication with their demos, "Where Gods Excarnate" and "Festering Carcinolith". Ugly is but one word to describe Chaotian's conduct on the two debuting entries into their catalog uncleaned and uncured yet vaunting the necessities of quality underground death metal. Mentioned alongside the likes of Undergang and Hyperdontia, it comes as no surprise the demos were regurgitated through Extremely Rotten Productions on cassette which sold very well to the point of now being demanded. MetalBite caught-up with Søren to receive some insight about their wanton works. 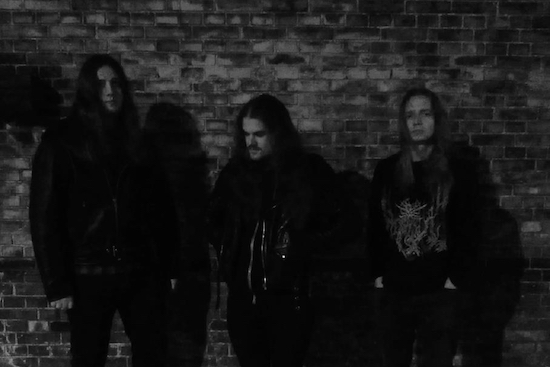 Thank you for accepting this interview with MetalBite, how is everyone in the band doing?

Everybody is doing well, I would say! Been working a lot on new songs lately, and just getting up to date with some new merch coming in as well as the Festering Excarnation demo compilation.

How has touring been? I understand you are set to perform at Porto Deathfest.

We haven't really been touring - in fact we've so far only played one show outside of Kill-town! But yes, our first international show will be at Porto Deathfest in March with our friends in Undergang, Summon and Archaic Tomb from Portugal. We've been looking forward to it for quite a while now, getting to see new places and play for some new sick bastards is part of why we love doing this!

What led to the formation of Chaotian?

I was actually doing a different band that fell through, and I left my online ad for a drummer up by accident. Andreas contacted me and we very quickly decided this would work out. Not long after Jonas joined our ranks, and we decided to focus on grimy, full-on death metal from there.

You put out a sick demo in 2018 ("Where Gods Excarnate") that I fell-for after discovering it on Adam Schnellenbach's channel. How did the idea of that demo manifest?

Thank you! Adam has been a fan of us from the very beginning, so we're glad that his channel guides new fans to us! The idea for Where Gods Excarnate came from us having about 5-6 songs ready, and then we decided from the songs with the best arrangements which ones we'd put lyrics to and release on our first demo. So, we were guided by David of Undergang to Tuna and Djævlesound studio and recorded our first demo there.

Then a year later, "Festering Carcinolith" was birthed; that stayed within the parameters of "Where Gods Excarnate", dirty, still somewhat complex and heavy. Is it thematically linked to the prior demo?

Thematically, I wouldn't say it's directly linked, but I mean I still used the same ideas of chthonic mythology, H.P. Lovecraft-infused geology and apocalyptic themes in the lyrics. Musically Festering Carcinolith meant a lot to us in the sharpening of our sound and getting closer to our personal style. I feel like it helped us quite a bit, as the songs we write now are much more focused without sacrificing too much of our creativity.

Can you please describe the experience of recording both demos?

Surprisingly relaxed. I think we spent about 3-4 hours in total for the recording, and the remaining mixing and mastering was put in Tuna's hands. We didn't want too much done to them, as fucking around with knobs and getting a 'really good' sound isn't really what we tied together with demos. They're named as 'demos' for a reason.

Were there any lyrical or songwriting differences that were sacrificed/scrapped when recording the music on either demo?

We didn't really have any lyrical differences - I was given a lot of freedom to do whatever my mind came up with, haha. As long as it fit into the music and was 'death metal' enough, the other guys seemed pleased. Some songs were scrapped and have had some riffs recycled or whole songs rearranged/fucked up in the future. We spent a lot of time polishing our tracks in the rehearsal room. I don't feel like we've scrapped a ton of songs, but sure we've probably scrapped a bit more than a third of what we've written.

Both "Festering Carcinolith" and "Where Gods Excarnate" have a very raw sound; was this intentional?

Very much so. Both from us and Tuna. I'd say maybe they could've had better recordings (as it was all live, and you can very much hear all the sloppiness), but again - it's meant to be as true to our live sound as possible. Only vocals and solos are layered on top of the combined rhythm section.

Could you describe the recording equipment used at the time for both records?

Pretty standard. The amps used were pretty good and mic'd up with SM57s if I'm not wrong. I can't remember the details of the drum mics, but it seemed like a standard live setup - mic'd toms, kick, snare + hi-hat and overhead. Again, raw sound, not too much bullshit - that can wait for our album and what not.

How influential was the cover artwork to the music on the demos, or was it the other way around?

To be honest, the first demo cover was just an old photograph from a Cuban boneyard that was dugged up in the late 1800's. I focused on the casket with the skulls, as they looked pretty cool in my opinion. Wasn't really too tied to the music. Festering Carcinolith was more thought through, as it's depicting the title track - a rotting, festering flesh monolith. Pretty retarded, but looks rad. It was done by my good friend Adam Power as well!

Are there any literary works that may have inspired the concept behind "Where Gods Excarnate" and "Festering Carcinolith"?

I would say H.P. Lovecraft, various Mayan, Aztec and Greco-Roman mythologies have had the most influence for me. But I haven't dived far into the lore, I kind of just wanted to create my own horrid universes based on those ideas. Geology (my line of study) has also sneaked its way in, because some of that stuff is pretty apocalyptic haha.

The lyrical theme of outer worlds is an excellent one especially for a new band. In it lies the strong possibility of expanding and evolving the music. Does Chaotian have any aspirations of that sort for the band?

I guess every band want some form of evolving, but we don't want to stray away from our roots. It's very much a death metal band, it will remain so - but yeah, we want to see what our sound leads us to. It will most likely lead to more death metal.

On a personal level, how attached to the lyrical content is the band (if at all)?

Not sure how personal it is, it's apocalyptic and living in Denmark is extremely comfortable. The concepts in death metal is surreal for all of us - I very much doubt many death metal musicians have actually witness any gruesome murders or even seen an actual exhumation. So yeah, it's attached the band to give the feeling of chaos and death that inspired us musically as well.

I hear some Ross Dolan (Immolation) in the vocals mixed with some Undergang and overseas bands in the song writing. What bands would you say have an effect on Chaotian's music?

It's no secret that Ross Dolan's vocals and all of Immolation are a huge inspiration to our band, and Undergang has also been a closely tied factor to the band. Many bands from the more technical sort (Demilich, Immolation, Deiquisitor, Infester) to the grimy (Undergang, Fetid, Autopsy, Mortician) and many other bands have inspired our sound. Lyrically and musically, Chaotian is meant to combine all member's love for various types of death metal, and shape our sound based on that.

Will this primal sound be present on future Chaotian releases?

Most definitely. Again, we are not planning to play anything but our type of death metal.

Is there a vinyl compilation or anything of the sort planned for "Where Gods Excarnate" and "Festering Carcinolith" given Extremely Rotten Productions put out the cassette versions?

Yes, Me Saco Un Ojo and Dark Descent will be releasing with ERP our demo compilation Festering Excarnation on vinyl, CD and cassettes. We'll be recording a single for our upcoming album as well, just so people get a taste of what we're doing and for them to know we're not dead!

Thus, bringing me to ask, is there any new material currently in the works, what can you tell us about its concept etc.?

Yeah, all our efforts right now are focused on writing new material pretty much. Lyrics haven't been decided much, as our focus is initially often on the arrangement and music. I have been playing around with some ideas of Roman decimation techniques, more mythologies and stupid horror tropes we all love! So, no real concept as such, just pure death.

Thanks again for the interview, and best wishes for new music. Any last words for the supporters?

Thank you! We'll make sure to continue writing the best way we can. And keep an eye out for Kill-town - much more than just our demo comp/single/album will come out...