Coming from the doom metal monolith that is My Dying Bride, Shaun Taylor-Steels presence in newly formed epic doom metal band Godthrymm would play a vital role in the outcome of their debut full length album, "Reflections". Also having the support of ex-My Dying Bride band-mate Hamish Glencross, would prove to be a strengthening factor, thus giving the album a deeper significance to "Reflections" as a whole, all the while serving as therapy. MetalBite was granted some time with masterclass drummer Shaun Taylor-Steels to share some insight about the process involved in crafting "Reflections", among other things. 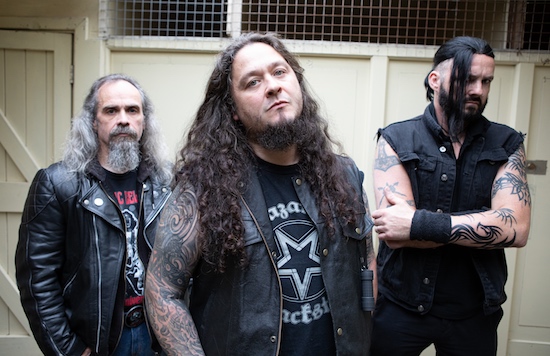 Thank you for accepting MetalBite’s request for conducting this interview. How are you keeping up at the moment?

Greetings, you are very welcome. Thank you for taking the time to fire off a few questions in my direction. I'm very well thank you, very busy with the usual things, family, music and work. I wouldn't have it any other way.

"Reflections" is an outstanding album that I think supporters of Dautha and the likes of will appreciate. 'Monsters Lurk Herein', 'Among the Exalted' and 'Light of You' evoke feelings of despair, sadness and dejection. How connected to you is the music on "Reflections"?

Good question. Without getting too deep, during my life journey, I have experienced some very traumatic stages in my life so ultimately, I feel very connected to the whole album collectively. Also, in my specific drum tracks I can hear pain, sadness and dejection but, I also hear the triumph.

What song/s on the album would you say speak the loudest to you?

To be honest, I can relate to every track on Reflections, they all speak to me in different scenarios. If any, then, I would say that 'Cursed Are The Many' is probably the most relative to me and my experiences with myself.

How closely did yourself, Hamish and Bob work on Reflections?

Well, since Bob hadn't actually joined Godthrymm until after the writing and recording process of Reflections mostly it was just Hamish and myself. I've worked with Hamish before on little side projects, Solstice and of course MDB, I have to point out that we have fantastic chemistry between us. We are on the same level; Hamish knows what I'm thinking and vice versa therefore it's extremely easy for us to work together. I've never experienced this with any other band members so it's very unique. We wrote and rehearsed songs after work at our rehearsal room, we put a lot of hard work into it but, wasn't really a hard process, if you can see what I'm aiming at, if anything, it was extremely easy, everything just fell into place. Once a track was written then we would record it, listen to it and decide whether or not to amend certain sections. More often than not we would get very excited at the prospect of recording and sharing it for real with an audience.

Did the drumming prove more challenging given the past situation with your ankle?

Oh no, not at all. My ankle is fine now in fact it has been for quite some time. Believe it or not it was 15 years since i had that accident. Since then I've recorded and gigged quite a lot after that. I took a couple of years out to rest my ankle then started playing again. I recorded an album with Vestige Of Virtue from Norway entitled "Sophia" then, in 2012 sessioned with MDB during "The Barghest Of Whitby", "A Map Of All Our Failures" and "The Manuscript". I also played some pretty big headliners with MDB thereafter.

The music here possesses a very dark overtone that is sustained all the way through to the funereal 'Chasmic Sorrows'. How focused was the band and in particular, yourself when crafting the music?

Specifically, for Hamish and I, we wanted this to be the best thing we had done so far musically. We set our sights high, therefore, it was extremely important to us both that we were very focused, it was imperative, we had to reach our goal and we did.

Could you provide a slight glimpse into what the artwork on "Reflections" represents?

It represents someone holding up an antique mirror with a bunch of anthropomorphic souls reflecting out from behind it. Brian D'Agosta made a conscious choice not to use a face or skull of any kind since the mood needed to be cold and introspective with accents of light and melody.

Did the cover-art help in molding the music, more specifically your drumming, or was it the other way around?

It was the latter. We had rough mixes of the tracks then sent them to Brian. Brian then made the interpretation and molded his artwork so as to intertwine with our music and he did this perfectly. He's truly an amazing artist.

With Godthrymm being a trio, in what ways would you say this impacted the outcome of "Reflections"?

I've heard some say that drumming to doom metal of this sort can be very challenging due to its slow pacing. How true is this, and though being a seasoned drummer, how do you combat hiccups (if any) and creative roadblocks?

Yes, to a certain extent I believe that to be quite true. I do know drummers that play very fast but have problems drumming in that particular style. Personally, I've never really had any issues, maybe because I'm so used to that style now. I have a home studio too now so that enables me to practice whenever i please.

Could you describe what preparation/s were taken to begin formulating and playing the material?

Hamish would deliver ideas/ riffs and it progressed from there. At the rehearsal room we would play and record our sessions, listen back to them intently then decide what action to take, whether to remove sections and so forth. The process was very easy since there were just the two of us most of the time, we share the same vision.

Did drumming for the album or "Reflections" in general have any emotional effect on you?

Yes, indeed it did. It made me feel very positive and confident about my drumming again, something that I felt I'd lost over the past couple of years prior to Godthrymm.

Was performing on "Reflections" therapeutic to you having left My Dying Bride and all? Thus, bringing me to my next question.

Yes, it enabled me to believe in myself once again.

In a recent interview with Aaron and Andrew of My Dying Bride, Aaron was quoted as referring to yourself and ex-member Calvin Robertshaw as "those two" in response to a question regarding his and your departures from My Dying Bride. Even implying, he (Aaron) 'couldn't care less' when Calvin and you left. Andrew also seemed to be displeased with the 'timing' of said members' departure, citing it as 'wrong' and not wanting to dwell on 'what they did'; then going on to say its musical effect was 'beneficial'. Am I missing something, or is there some sort of unsettled bad blood between yourself and My Dying Bride, specifically Aaron and Andrew?

There is no bad blood between us at all. In fact, I see Aaron quite a lot, he always makes an effort to see our local live shows. I'm still in contact with Andy too. We are all still really good friends, that's how it should be. I guess that, yeah, in theory, the timing wasn't great for MDB but it WAS the right time for me. Walking away from MDB any other time wouldn't have been in MY best interests. Self-preservation. I've spent far too long putting other people first, only to be disappointed and disillusioned, I can't let that happen anymore. I'm referring to life in a general way here too not just band life. The fact that Aaron isn't too bothered is surely a good sign to me anyway. He's been through some extremely tough times over the past couple of years, I would hate to think that I in some way had contributed to that.

Hearing the music and your drumming on Godthrymm compelled me to check out Vestige of Virtue's ("Sophia") which is an excellent album. Are there any plans for a new Vestige of Virtue release?

Oh, thank you for your kind words. Yes, it is a fantastic album, I still love listening to it occasionally. It brings back a lot of happy memories. We do have the beginnings of some new Vestige Of Virtue material but it's no quite finished. Kjetil is very busy with other bands and also his record label over in Norway. Still, it would be great to record and release another Vestige opus so, in the future maybe yes.

How much are you looking forward to playing the new material on "Reflections" on tour?

I'm looking forward to that particular prospect VERY much. I am/we are very excited but also a little apprehensive too. We have given so much of ourselves to this band over the past couple of years, we have watched it grow and mature. It's our baby so of course, we would like to succeed in every way possible.

Thank you again for taking the precious time to be interviewed by MetalBite, we wish the band all the best for future endeavors. In closing is there anything you would like to say to the supporters?

Thank you too for taking the time and showing interest. It's not very often that I get specific interviews but when I do I certainly enjoy them. To our supporters too, I would like to send a huge heartfelt thank you. Without you all Godthrymm would not be possible. Hope to see you all soon. Horns Up.