It's a very rare thing these days to stumble across a black metal band that is honest with themselves and about their music. Far too often the image painted by many 'black metal musicians' exceeds that off their mental and musical limits. However; in Auckland New Zealand, Winter Deluge sets themselves apart from the fake with their latest EP "Degradation Renewal". Not claiming to be an innovative offering, this EP displays a sense of confidence among members in doing what Winter Deluge does best, Black Metal. Guitarist Arzryth (Aaron Baylis) sacrificed some time to answers MetalBite's questions about the "Degradation Renewal" and other topics. 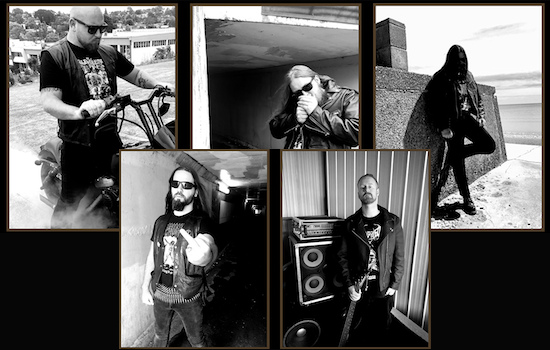 Coming from Auckland, New Zealand, please describe the black metal underground there and scene - (I hate that word but..) in terms of reception, support and even controversy; how it differs from other places?

From personal experience, I couldn't tell you much on how it differs from other places in the world as we have only ventured outside of New Zealand a couple of times to play in Australia. However, in regard to that, Australia has a much larger selection of great bands/people who are dedicated to underground metal and their attitude/personalities align with that. Whereas the underground in New Zealand has only a small and select handful of bands who have nurtured their own will to create something with integrity, without the need of gratification from those around them and who hold a strong devotion to their art. These are the bands who have stood the test of time and who can still manage to satisfy their hunger with or without any major support from the local "scene", the ones living and breathing the lifestyle amongst the real world, away from their computer screens…

The "scene" here is small in comparison and the gig turnouts have surely declined over the last decade or so but I'm sure most of us who are on the same page are content with what we are focused on within our bands, we respect and support each other in that regard and we enjoy playing those shows together when the time comes. Controversy? Anytime you have an honest opinion or a face to face approach to addressing an issue, that alone can be considered controversial! Haha and I'm sure that applies to most places these days. Most people wouldn't dare attempt to express themselves or confront you in person without the safety net of their keyboard, so what else can I say?

It's been 4 long years since "Devolution - Decay", what prompted the absence?

Nothing really, just the natural cycle of shifting our focus back to writing new material. Just living our day to day lives, listening to music, rehearsing once a week, hanging out, drinking/smoking together you know… the usual shit. A few shows were had in that time but not many, mainly just shows that we wanted to play. You will stagnate the live atmosphere for your band if you play here too often or if you just play with any old band for the sake of it.

How's the return been greeted?

I don't know yet, we never left! With the new EP set to be released and once we are allowed to play live again, I guess we will soon find out…

How did you end up on Osmose Productions?

Osmose were amongst the first few labels I had contacted about releasing the EP, as to be expected labels like Osmose probably receive a lot of emails from bands so we never heard back from them. A few months into the label hunt, I had started speaking with Thomas from Forgotten Wisdom Productions who was a good bloke. He expressed that he really liked the EP but would not be able to release it in which he recommended Osmose Productions. Thomas brought it to Hervé's attention, so I contacted him directly and sent him the music in which he responded; "Looks like everyone hear enjoys it!!! I will get back to you tomorrow" then he offered us a contract to release the EP and the next album. We were pleased with the outcome to say the least.

There are too many bands in metal and black metal specifically, what does Winter Deluge bring to the table that other black metal bands don't?

I don't know… we just follow our own instinct. I'm not gonna sit here and tell you that we are 100% "original" or that we do "this" or "that" better than others because we have no desire to try and sell ourselves in that way. We create music the way we want to hear it and if there's a part that happens to remind us of a certain riff or bands who have inspired us, then so be it. Without a doubt everyone should seek originality within their creations, but primal instinct always brings you back to what you were raised on and I can't see why I would have any desire to reject that. The bands before you (classical, blues, rock n roll, heavy, thrash, black, death metal or whatever) are already engrained in you therefore there should be no need to compare yourself to other bands around and certainly not just to "black metal" bands. People can take it or leave it.

I wouldn't say "bother" but what tends to give us the "Fuck that" observation, is cunts going on stage dressed like fuckwits pretending to play black metal. Trendy short haircuts, caps, shorts, sneakers the lot… and if not that… they look like they've come straight to the gig from there cozy desk job. It's a bloody joke! haha I think they call it post black metal or something crazy like that…None the less, it's shit and it is not convincing. It just tells me that they've probably never listened or been into any good heavy metal or rock n roll. Fuck that.

Why release new Winter Deluge material now? World events, mankind's decline, any factor/s in general that may have triggered it?

Just a coincidence mate, the EP was recorded a year ago and Osmose set the release date back in January. No doubt it's a pain in the arse logistically around this time, but ironically I think the times are very fitting to the EP's theme, wouldn't you agree?

Given the apocalyptic sound of the EP, to be a bit more definite, what themes are explored on the "Degradation Renewal"?

Most of the themes in Thomas' lyrics are generally an observation on humanity's self-destruction and the world which we have created for ourselves. Songs like 'Cold War' are a reflection of Thomas' personal experiences from his youth living in the former GDR behind the iron curtain. Others are nonspecific to historical events but tend to highlight the death/extinction, the vanity and ignorance of the human race who tend to think that their way of life on this planet is perpetual.

And what does the phrase 'Degradation Renewal' signify to the members in Winter Deluge?

Mort had suggested the name at a rehearsal in which we all sat down to discuss the concept and what it means to us.
'Degradation Renewal' signifies the degradation and downfall of society in order to create something new. The renewal comes from the fire within the fierce and 'free' spirit of man, and it celebrates the will to separate one's self from society and to exist without it.

Who created the artwork for "Degradation Renewal" and what does it represent?

I did the front cover artwork and we had an artist named Daniel Bloxham (who also drums in a band called Methchrist) re-draw the WD sigil featured in the layout which Yohann at Osmose took care of. Being an EP, we wanted to keep the artwork for this fairly simple and direct. The image on the front cover displays the superior spirit within man rising and as it leaves society to perish, a reflection of society in its throes can be seen within the radiance of the levitating figure. As I said, its fairly simple and I don't consider myself a graphic designer by any means, but it's a handy tool and I think I managed to signify the meaning of the title.

Your sound on the EP is mostly that of 1st - 2nd wave black metal, but there's also death metal, thrash metal ('Within the Remnants of Humanity') and atmosphere in there, thus, what would you define Winter Deluge's genre of metal as?

We define ourselves as a 'Black Metal' band. It was our intention when we started the band and it has always been our primary sound in which we have never strayed too far from. Besides growing out of the typical aesthetics like 'corpse paint' and the silly pseudonyms we had, nothing has changed the spirit of our music. There is definitely a strong death metal and thrash metal influence upon us so that will come out naturally, outsiders can define us either way.

Are there any bands from New Zealand that may have influenced Winter Deluge's sound?

Who and where was "Degradation Renewal" mixed mastered etc.?

The EP was recorded at Dynamic Rage studio, a studio which had recently been put together by a couple of our good mates, Raj Singarajah and Cam Sinclair. Both of them collectively engineered the sounds captured in the room with each instrument, Raj handled most of the tracking and Cam mixed it. Cam suggested a bloke named Luke Finlay whom he had worked with previously to master it, so we went with him.

How was the recording experience of the EP?

It was great experience for everyone I think, we were the first band to record in their studio and it all went pretty smoothly so I'm sure Raj and Cam are as pleased as we are with the result. We have known Raj for the entirety of the bands career, and we have played countless shows with his band (Exordium Mors) over the past 15 years. I knew Cam from past years but didn't see him very often and he had only joined (Exordium Mors) a couple of years back so it was great getting to know the prick more, a great lad and he knows his shit.

We've never spent more than 2-3 days in a studio so having the opportunity to spend a month or so working on it was an eye opener and a new experience for us. With much focus and many long days and late nights spent, we achieved what we had been waiting to capture after all these years and it was great to have this time to just escape from everyday life and attack this with guys who know us personally and how we function as musicians. And of course, we drank a lot of piss and had a lot of laughs too so it's a definite that we will record with them again.

Correct me if I'm wrong but 'Mass Graves' appears to be sung mostly in German; why?

Thomas is German and didn't learn to speak English until he was in his 20's. Although he speaks English fluently, sometimes using German dialect allows him to place the words within the music a lot easier and execute that aggressive approach to his vocals more freely. It's not often he sings in German but depending on how the song comes out and what he has written to the music, it comes across best in his native tongue.

Do you/have you experienced any sort of adversity from any particular movement/s in New Zealand since the band's existence?

Never, most people in NZ are not aware of the underground bands.

Thanks for sharing your thoughts with MetalBite, final say is yours.

If you're gonna listen to the EP play it at maximum volume. Cheers!