In the underbelly of Sweden, something contagious is rapidly manifesting and threatens to destroy the right-hand path and corrupt traditional norms; the main perpetrator, Yxxan, fronted by one Morbid Aggressor steers the way to desecration. Having quickly received the support of Nuclear War Now! and the underground currents, the demos put out by Yxxan deliver a sonic storm of primitive, unbarred black metal that erase all room for compromise. Whether or not you agree with her ideologies, Morbid Aggressor makes it clear that she has no cares for opinions and that Yxxan is very much a serious commitment, for now… 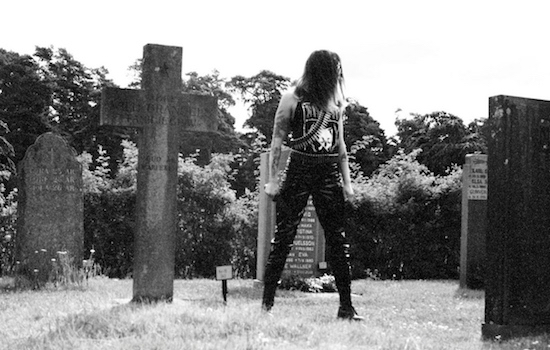 How have you been with all that's going on?

So far so good, given the circumstances. I live close to my rehearsal room so I'm still playing, but if I got sick, I have electronic drums and acoustic guitar at home.

What does the name Yxxan signify to you?

"Yxan" means "the axe" in Swedish and the name should give a hint of how the music sounds. Double "x" looked better on the logo.

How did you manage to get signed to Nuclear War Now! of all places?

I sent my demo to NWN, they thought it was cool and offered to release it on tape.

How has Yxxan been received in the Swedish underground thus far?

I feel like it got more appreciation in Swedish crust punk circles than other new black or death metal bands otherwise get there.

Are you bothered that some may get a negative impression about yourself Morbid Aggressor?; as you don't appear intimidating enough. However; looks can be deceiving and far too often people only look the part.

If I cared about people's impressions, an extreme metal solo-project would be among the last things I do.

I understand Yxxan is a solo project, leading me to ask, was any of the music on either "Inverterat Korståg" or "Satanic Fortification Overbalance" programmed or were they both recorded using real instruments?

I play all instruments on both demos.

Also, where was the "Inverterat Korståg" demo recorded and mastered and by who/whom?

Inverterat Korståg was recorded pretty much the same way as Satanic Fortification Overbalance - in my rehearsal room with a two-channel sound card. But as opposed to the second demo, on Inverterat Korståg did all the post-recording stuff myself, and I'm happy that I took a different decision for Satanic Fortification Overbalance.

How did you come to know Andrew Lee of whom mixed "Satanic Fortification Overbalance"?

I've known him from an online metal community and met in real life once at a festival.

How did you achieve the raw sound on "Inverterat Korståg" and "Satanic Fortification Overbalance"?

By doing everything raw and straightforward to begin with. I haven't changed the heads of my snare since I bought it, recorded bass through a dumpster-dived amp with an old beat-up bass I got from a friend and recorded everything in a 10 square meter rehearsal room. On Inverterat Korståg, worse recording decisions were taken, and worse equipment was used, which obviously added to rawness but took from the quality.

What does black metal mean to you?

It's a subgenre of heavy metal through which I can express myself. No pseudo-philosophical made up "deep" meanings.

Is Yxxan a long-term commitment, or is it just a temporary ploy for some attention?

For now, I'm constantly creating new material, but, aside from agreements that are already made, the only person I'm committed to regarding Yxxan is myself. So if I feel like shutting it down I'll just do it.

Yxxan's lyrical theme is cited as being 'Militant Anti- Christianity' on The Metal Archives; please explain your anti-christian views; aspects of the religion you oppose etc.

I oppose it as a whole without sitting all day reading the bible and dissecting it. Sure, a so-called "progressive" christian could pick out and confront me with whatever positive aspect, but it will not be exclusive to Christianity or any religion at all.

Is that religion and its followers a problem in Sweden?

It always raises its ugly head as soon as we stop watching.

What are the "Inverterat Korståg" and "Satanic Fornication Overbalance" demos about?

The lyrics of songs are not related to each other and these are not "concept" demos.

Explain 'Lead Me to War (Mother Satan) /Back in the Stone Age'. Usually Satan is depicted and thought of as The Father not a mother; how is Satan from your perspective a woman?

Everything is usually depicted as male by default, unless otherwise is directly relevant. I have no interest in perpetuating stupid norms.

Tell us a bit about the artwork on "Inverterat Korståg" and "Satanic Fortification Overbalance". Who created them, and what do they represent?

I made both of the covers. The artwork of Inverterat Korståg represents two pagans executing a christian missionary. I chose this theme because the lyrics of the first track are inspired by a story of Bruno of Querfurt's death - executed by pagans for trying to spread Christianity in Eastern Europe, hence the use of Baltic singing and text introducing to who Bruno was in the intro track on the demo. The cover of Satanic Fortification Overbalance is related to the last track on the demo and represents getting armed by Satan for combat.

Are there any plans to take the music to the live stage?

Yes, given that they will not be disrupted by the ongoing pandemic. So far there are three shows planned within the upcoming year with stand-in musicians on guitar, bass and vocals.

Outside of black metal, what do you do?

I play drums in a couple of punk bands and work as a sysadmin during the daytime to financially support all this.

What does Yxxan has planned for the foreseeable future?

A few shows are planned so right now I put focus on rehearsals as much as it is possible, but I plan to release new music also. Given the situation, time will tell which will happen first.

Thanks for doing this interview with MetalBite. Any words for your supporters?

Peace is a trap set by enemy infiltrators.