There is a rumor going around that in the 11th century, a lone Viking boat got lost when traversing the Atlantic Ocean and ended up on the North Carolinian shore. The Scandinavians navigated the tar river and settled not too far off the coast around the area where the city of Greenville stands today. While some will say that this rumor is completely unfounded, others will point to Æther Realm's releases as a proof that this Viking community is still alive and well. Æther Realm released their third full length album "Redneck Vikings From Hell" on May 1st, 2020 under their newly signed label, Napalm Records. 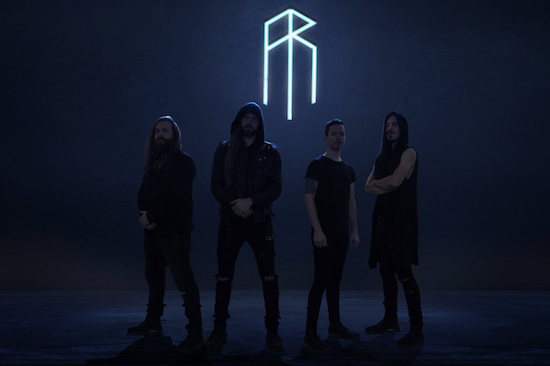 Hey guys, I want to first congratulate the band for your new album, "Redneck Vikings from Hell" which came out on the first of May under Napalm Records. Could you tell us what the inspiration behind the name of the album was?

Well, we're from North Carolina but we still have a song about Odin. There's a bit of silliness in that I reckon, and it was time we acknowledged it.

So, your second album, "Tarot", had a theme going on with the tarot cards. Are there any over-arching themes in this new album?

Every song is a self-contained idea, with the exception of the final track (which calls back a few themes across the album). We went into it with the intention to write a "bangers" album like some of our favorites - Bodom's "Are You Dead Yet?", and Kalmah's "The Black Waltz" come to mind - where all the songs live in their own little individual worlds.

The recording and production of "Tarot" was made locally in North Carolina. Now that you are signed on with a renowned label, Napalm Records, are the dynamics of recording, producing and mixing a new album different?

Not a ton really. We're lucky to have assembled such a skilled team. Every album is a chaotic mess (primarily my fault), and every time the team steps up and somehow guides it through to the final mixdown. This time around, our core team was Kile Odell (production engineer, mixing engineer, he also did Tarot and The Magician), Ben Turk (Orchestration, he's in Gloryhammer), Jamie King (Mastering, he did One Chosen), and Zach WIlliams (Part time vocal tech and production assistant, full time Mouth of the South, he's got a band called Dead Eyes). When we did Tarot, Kile and I did one last all night mixing session (we were mixing 'The Sun, The Moon, The Star' - this big ol dense 19-minute song). With this album, on the last night we were smashing out edits for every song back to back like one an hour, Kile would drop it to me, I'd run to my car and drive around and listen, then run back in like "BASS DOWN, BASS DOWN 1dB" and we'd hit that and repeat. Chaotic. Probably forever.

Every band has their own method of composing new songs, how do you handle this task? Is it much more a group activity or its mostly relegated to one member?

For the most part I handle the song assembly - connecting THIS verse with THIS chorus, deciding key changes, creating a skeleton of a song that will be added to by everyone. So, everyone is chopping away at individual sections - creating all of the lush detail, and I just have to figure out how it all fits together.

Idk whether you'd call this is a blessing, but at the time of this interview we are not so big a band that we don't have to have regular jobs. I work for a pharmacy, so I'm still clocking in as normal, and the other dudes have jobs or freelance gigs that have them either working remotely or on paid leave. We've had to postpone the album release tour which has been sad but all in all we've still been able to pay the bills, so I reckon we're all hanging in there.

The song 'Guardian' from your new album was released earlier in April and generated a lot of discussions. It seems like some people were not expecting a power ballad. Was this something you expected?

Yeah we all had a talk when we were talking about picking singles, and I was really adamant about making 'Guardian' one of them. My argument was that "well, we know for sure everyone's gonna like all these other ones. If we pick one of them, it'll do fine no question. With 'Guardian', we don't have a clue what people will think. If we don't try it for a single, I'm always gonna wonder what would have happened if we did." I'm glad we did, seems like it came out at a time when people needed some encouraging words.

Æther Realm gets often compared to the Finnish melodic death metal scene to the point where the twitter description for the band says that you are not from Finland. In your new album, "Redneck Vikings From Hell", it seems like these influences are not as present as they were on "Tarot" or "One Chosen by Gods". How do you see the musical progression of Æther Realm?

I still reckon our music fits in with European metal a bit more than with American metal, but if I had to take a guess, I'd say we're a bit more comfortable straying from the conventions of the genre than we used to be. At the end of the day, we don't want to be the American version of some more well-known euro metal band, we just want to be us - weird eclectic genre mashups and all.

You guys had the opportunity to play alongside Wintersun, Omnium Gatherum, Soilwork and many others. It must have been one hell of a party. Any memorable stories you want to share?

The one I remember most is deciding to crowd surf in sandals while Wintersun was playing and busting open one of my toes. I didn't realize I'd hurt myself until I noticed my foot was wet, and I looked down and realized it wasn't hot tub water. Limped across the ship back to my room and washed it all off, wrapped it up in toilet paper, stuffed it back in my boot and went and played our show! Not the most comfy time, but I'd still call it fun.

Anything else you want to add?

Redneck Vikings From Hell comes out May 1st, 2020. Pick it up if you feel like being blown into an adventure via a shotgun blast to the face.