Another siren calling for total destruction comes from Poland, one of black metal's most iconic regions. But this destructive cry comes not in the form of only black metal, but a dreaded brandishing of death metal, war metal and the sonic hell of industrial ambient noises. The vessel fueling such a disturbance has been identified as DeathEpoch. If the name does not clarify what you've enlisted for on their upcoming album "Abysmal Invocation", then Lord K. has some words that may supply those inquisitive ears with better insight. Here's what one of it's units had to say to MetalBite and those following the clinging sounds of machine gun chatter. 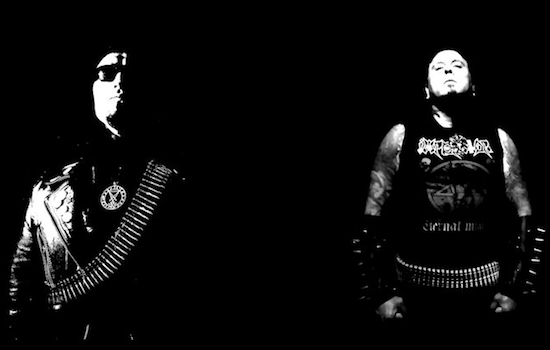 How didn the idea of DeathEpoch come about?

The idea for DeathEpoch was born in my head in March 2020.

I wanted to combine extreme metal with sounds like ambient and heavy techno. I'm still fascinated by late and early Beherit.

Was it difficult in finding members to perform on the album hence all that has transpired and still is globally?

The first step was to ask Morgul if he would like to record this material on guitar and bass with me. He gladly entered it. Then we invited the guests to the album in the form of boys from Acheron Diocletian and Cultes Des Ghouls.

About the collaborations, describe your relationship with Vincent Crowley, Kris Stanley and Mark of the Devil. Was it tedious convincing them to contribute to this monstrosity?

No. We sent them ready-made songs asking if they would like to support us. Apparently they liked the material very much and they willingly gave their demonic vocals for our material.

Please state some philosophical common ground between yourself and Morgul with reference to the war metal subgenre.

We are both geeks of extreme metal which will breathe black blood in us. We love bands like Beherit, Revenge, Blasphemy. For us it's religion.

Would you say Deathepoch is an establishment that requires a philosophical criteria to be understood and agreed upon before one could take part? And was this the case with the inclusions of the guest musicians?

Of course. I have great admiration for them and for me they are icons of metal music and attitude as being.

War metal as a genre is flooded with bands, but yours is interesting, sonically. Explain the meaning behind the ambient tracks ('Abysmal Invocation I' etc.), and your vocal styling.

When it comes to industrial works, this was the idea behind the musical concept and lyrics. World industrialization, war conflicts and death.

Some of the ambient samples used on the record are quite unnerving such as on the opening of Bombenhagel; what is the general ideology expressed on this track?

I think that those who reach for this material should not expect nice pleasant sounds and flowers.

What was the most challenging experience during the recording of "Abysmal Invocation"?

Drums recording for sure. I came back to playing drums after 20 years. It is true that I recorded drums for another project which is Nekkrofukk, but there is rather beating ritual rhythms than a real crazy drumming. The second thing is my low vocal and it was quite hard to mix it with low tuned guitars. However, I like the end result.

Some traces of more notable war metal bands can be identified on "Abysmal Invocation", however DeathEpoch has a distinct identity of its own. How important for you is it to stand apart from the crowd?

It does not matter to me. I do music because I love it and not to be original and famous. I am 100% fulfilled in what I do and this is the most important thing for me.

What do guests Vincent Crowley, Kris Stanley and Mark of the Devil bring to the arsenal from your perspective?

Magic and shivers on your skin. It's an honor to have such big icons on your record.

Does "Abysmal Invocation" reference/utilize/express and unpopular philosophies in terms of its lyrics?

I think the tests are most relevant to today's fucked up world. Death violence destruction.

What are your thoughts on censorship in metal of all things?

That is really crazy and full of shit. I don't understand it.

Have you experienced any of this aimed at yourself/bands associated with?

Yes. One time many years ago on a concert in Krakow I was playing with a band called Hate and we play with Carpathian Forest and Gorgoroth. Gorgoroth has on stage many bloody and satanic parts like dead lamb heads and many things like that. Than comes the police and they're not so fine about that hehe. Later all this shit was on TV in Poland… called satanic mass in a city of pope haha… fuck it.

Coming form a Polish entity, I'm quite pleased with what has been offered on Abysmal Invocation. You managed to create a flammable soup of black/death and war metal whilst still remaining true to the Polish black metal identity. Please march us through the crafting process of DeathEpoch.

So first I recorded the drums. Later Morgul made riffs and recorded guitars and bass. Next part I put on the vocals, later our guests and in a minetime, I prepare all industrial songs. When all was ready we send all to my friend Mike from band Feto In Fetus and he made mixing and mastering.

How has the reception for "Abysmal Invocation" been thus far?

You must ask Morgul. He takes care of it and navigates it.

As far as touring, are there any confirmed dates as yet?

I think well never stand on a stage.

And to which territories would you like to take your doctrine?

I never thought about it.

Thank you for doing this interview with us. MetalBite wishes DeathEpoch all the best for the album and henceforth. What incendiary words would you like to conclude with?

Trust yourself! No gods before us!