The human abomination shown six years ago on "Esperalem Tkane" by Krakow's Odraza attracted my attention, so when at the end of April I got information from Godz Ov War about the second album of these black metalheads, my blood began to circulate faster. The first audition of "Rzeczom" confirmed the power and strength of the musical message of Stawrogin and Priest. While the debut was a youthful kick at a closed door, the second album turned out to be a conscious walk through the dark alleys of human existence, black metal more mature, dry and incredibly emotional. Shocked by the message of "Rzeczom", I asked the authors some questions, and here is the effect. 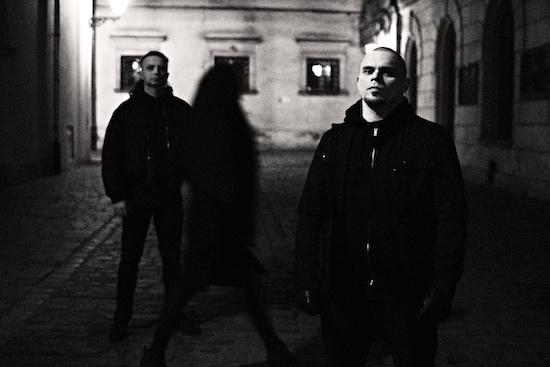 Thanks for taking the time for this interview. According to encyclopedic data, it is the eleventh year of your Odraza-musical existence, how do you evaluate it, especially when looking at the new album?

Hey! "Rzeczom" is a summary of thirteen years of camaraderie and eleven years of making music together. For me personally, it is largely a time of getting to know myself and determining the place that music occupies in my life. I think that in practice it had a colossal impact on the fact that today I am a relatively functioning person.

In my humble opinion, "Rzeczom" is a continuation and development of the path you have taken when creating "Esperalem Tkane", but the strength of the new album is the realization and such skillful combination of sometimes even surprising melodies with aggression, how do you see it?

It is difficult for the new album not to be this continuation - it was created by the same two people in similar conditions. From the lyricist's perspective, I knew that the album would not be a repeat of the debut - it couldn't have been, it's been 6 years. Texts for me as a form of a diary/report. The prospect of repeating yourself in this matter would be cynicism, or a lack of the capacity for any introspection. From the musical perspective, our goal was to make the arrangement more specific while looking for new forms, and finally to write an album that would be characterized by dramaturgy.

Although you were thrown into the drawer with the inscription "black metal", each of your releases is richly influenced by various genres, including those outside the so-called metal. Is it because you realize yourselves with black / death metal in other bands?

Mainly because in my opinion traditional metal playing has reached the wall in a way. I may be an old malcontent, but for several years I have not observed phenomena that would push the genre forward. Everything that is happening around me seems to be a gathering of reenacting groups and I am talking about our music as well. I will probably never be a musical revolutionist, I have no need or predisposition for it - what we do is tilt our head out of our little box to get away from the cliché, even for a moment. The second reason is simple - apart from metal, we are inspired by many musical trends.

You finished both albums with instrumental works, although in 'Tam, gdzie nas nie spotkamy' there is a short text, the song is instrumental in nature nevertheless, and "Kir" is a whole 20-minute live instrumental mini album. Do you like such compositions, or is it your Stawrogin animosity to your own vocals?

It does not result from animosity - such forms were favorable to the aforementioned works. Originally, we thought about the vocal for 'Ja nie stąd'. Firstly, however, the last words in 'Bempo' sum up what I wanted to communicate on the album with words, and secondly, the track simply does not need it. When it comes to "Kir", we also considered using the voice, but in practice words that would correspond to the music did not land on the paper. Some time ago I came across Celan's "Fugue of Death" - knowing it then, I would probably just adapt it.

I personally have great respect for your incredibly brutal and venomously-rough vocals, but it is in "Rzeczom" that you put a lot of effort into the variety of vocals. Was it possible thanks to some lessons, exercises, or did you just believe in yourself and take a chance?

Each previous recording session can be called exercises. For some time I took singing lessons, but it happened before Odraza's debut and it broadened my idea of ​​the correct voice emission. I still use these few exercises and visualize some assumptions, but it's hard to talk about deeper learning. I had clear assumptions about the vocals on "Rzeczom" - the music turns into different alleys, but the narrator had to remain the same. I tried not to overdo it and let the instruments speak.

I also have great appreciation for you, Priest. The drum lines on the new album are devastating, yet you also play guitar. Let us know, do you feel and create music more while sitting behind drums or with a guitar?

Priest: Thanks a lot. I create music mainly with Stavrogin and the instrument is of secondary importance here. My share on drums is incomparably greater than on guitar. The percussion is the means of expression that I know best and on which I most easily create on it. However, I believe there is much more that can be said with the guitar. Hence my tendencies towards this instrument. The equipment is there, but you need more self-abnegation and free time, which is getting harder and harder to get to a more specific level.

Let's go back to your mini "Kir". Tell us how this event materialized and how did this piece ended up being brought to the Krakow Museum for the "Remember with us" exhibition commemorating the destruction of World War II?

The piece was recorded during the event "Remember with us" - as far as I know, it was not accompanied by an exhibition with "Kir" as an element. The whole thing is actually the result of an acquaintance with the then employee of the Museum. We were asked to compose and play a piece that would be visually accompanied by fragments of Tadeusz Franiszyn's film presenting the area of ​​KL Płaszów. Michał (Mgła) and Kuba (Mord'A'Stigmata) assisted us on stage. The song was played, recorded, mixed in No Solace, and then released as a mini-album. That is the whole story.

Odraza is rather hard to find at concerts. Are there any chances that this will change? It is true that the current situation is not conducive to this, but after SUCH an album it would be advisable to hammer a nail on stage, wouldn't it?

We are not planning to promote the new material with concerts. Their topic hangs in the air, but the lack of unanimity and probably also clear motivation means that we do not take any steps in this direction. I was reflecting on my motivation to play both materials live and it occurred to me that I just wanted to see how these songs perform on stage. The point is, however, that I want to do it as a listener and viewer rather than a creator and performer. Preparing a concert set would mean many hours of practicing with session musicians - it does not seem very thrilling to us.

You are still playing Massemord and Totenmesse together, can you shed any light on what we can expect from these bands, especially Massemord, who has us waiting 7 years for the successor to "A Life-Giving Power of Devastation"?

Totenmesse is about to create new material, while MasseMord is not an active band in any form at the moment. Time will tell if this changes.

Do you maybe have some interesting facts about creative work in your other bands (Gruzja, Voidhanger), or maybe there are some new projects?

Everything is rather typical - in the rhythm of the functioning of a given band. Gruzja is releasing a split with Russian Neon Scaffold soon, and we are also slowly getting ready for the full album. The hit should be precise, so we plan to prepare well for it. WTZ started mixing the next full album and considers the evolution of the formula. I do not plan any other projects, there are already enough of them.
Priest: Voidhanger is silent temporarily, but it's probably the calm before the storm.

Breaking away from your bands, are Konrad and Mateusz equally busy people in their private lives? Do you find a moment to wander the streets of Krakow together, smoke a slug, have a sip of warm vodka in a piss stinking gate, or at least get into some band's concert?

We spend our time much more effectively now, life is full of duties and we want to use the moments devoted to music well. We have the comfort that the proverbial slug and friendly conversations take place during rehearsals. Wandering is, unfortunately, a beautiful song of the past, the same is with vodka at the gate. One does not drink at all, the other occasionally. What I would once call a gray and sluggish afternoon after waking up on a Sunday around 4:00 p.m. today I would rather call alcohol anxiety. My head gives me different adventures without any additional stimulation.

Let's go back to "Rzeczom". I know that the author of the cover is Sars, but I'm interested in where exactly this idea came from and how did you come across Mrs. Dorota Maria Kuźmicka? There is such sadness and anxiety in her gaze.

Dorota is our friend on private ground, and in Konrad's case also professionally. Originally, we had a few different ideas for the cover, but during the photo session accompanying the album, we managed to capture emotions that fully reflected the mood of the recording. Sars' first proposal related to this session became the cover.

The booklet contains information about the recordings for the period 2018-2020. Can you tell us what was the reason for the soooo long recordings?

Fatigue of the material - simply. The drum recording session took place in November 2018, basically until we entered the guitar studio in early spring 2019, we were finishing the bass arrangements. The guitar session itself dragged on mercilessly and completely drained me of my eagerness to write lyrics and record vocals. Honestly, I was then ready to throw it all to hell and go home. In fact, probably only the conditions that Przemek Nowak guaranteed us in the Impressive-Art studio meant that it did not finally happen. Several months of respite allowed me to catch some distance, and the last session of voice recordings took place at the end of February 2020.

I hope I didn't torment you to death. Thanks again for your time and I hope to see you again.

We also thank you for the interview!