"Caligari Records is about to release Můra debut EP and even though the quartet's debut recording is a "mere" two songs that clock around 20 minutes this is 'merely' a start for more horrors to come. MŮRA punish their listeners with a world-eating sound of death metal cacophony. Get ready for caveman-primitive throbs, tense 'n' hypnotic tropes and rough and raw yet remarkably massive doom parts that drag the listener deep into an abyss of sepulchral/bestial death. 20 minutes that unfurls a wide-screen canvas of dread, disease, filth and foulness". That's some info about the music I got from the promo materials but not much about the band itself. Wanna know more? Check out the review that Grindor wrote for "Doom Invocations and Narcotic Rituals", click on the 'play' button below to listen to the EP and continue reading to find out more about the band and the way they go about things. 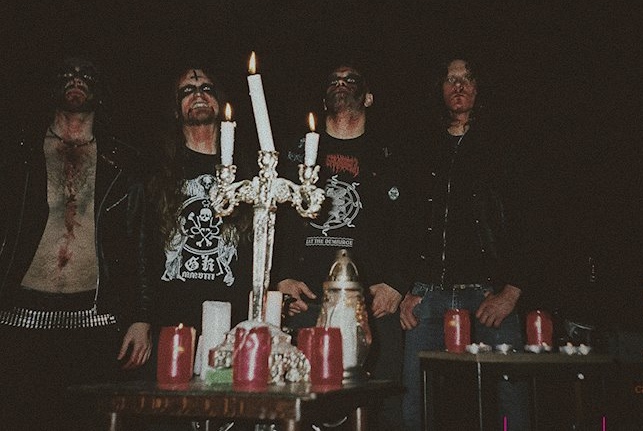 Thanks for taking time to do this, how is everything going?

Yep, thanks for the questions! Everything seems to be going rather dreadfully these days. Being quite miserable ourselves, we find this state of things somewhat satisfactory. The plague is spreading with no mercy, and if the development will keep up with the current tempo, we might witness auspicious tomorrows.

There is very little info about the band on the net, care to make a quick introduction?

Well, not much to say really. All of us have a certain background in the local underground metal scene - if it could be called that way. However, we prefer to distance ourselves from what it has recently become and all the scene queenery aspects of it, which we find a bit pathetic. At present Můra counts four constant members, and we are in the process of accepting a regular bass player. Only time will tell if he will fit in this torment.

It has several meanings in Czech language, depending on the context. What pops up in mind? A nightmare.

Most of you play or played in other bands, what was the catalyst for the creation of Můra?

Můra is a product of plague times, narcotics consumption and the disturbed psyche of its members. The initial twisted idea of a new project emerged during the last Chaos Descends festival where we have agreed to start the most drugged out band in Prague. At first, no one probably meant it truly seriously... nevertheless, Můra is what it is.

What are the stages of your creating process, how do you work on new songs and what influence the writing process?

Intoxication and the rest comes later. We just need an adequate set up in the rehearsal room and everything crystalizes at some point.

What was the most difficult obstacle to get through when composing and recording "Doom Invocations and Narcotic Rituals"?

To deal with each other, as everyone is indulging himself with the different region of the periodic table (or combining everything) and is pretty fucked up. Given that, we must express huge appreciation to Anders from Dödsmord Studio who had to cope with such a mentally challenged bunch of individuals.

How do you work out those situations where you do not agree with each other, where one's vision is different than the others?

There are four of us, potentially five in the days to come, and we disagree with each other for most of the time. But at least we all do agree on the music we want to play. All the dark atmosphere of the rehearsals in fact fuels the creative process. Thus, we could say that disagreements are welcome in case of this band.

Who makes the final decision as to whether a record is complete and fit for release?

All of us, including our sound person Anders. All of us spent a lot of time and energy mixing and mastering this piece and just got sick of everything. That being said, we must emphasize that we are highly satisfied with the result of the production.

Could you tell us about the lyrics / concepts you focus on or plan to focus on? Are lyrics important in metal?

In the case of Doom Invocations and Narcotic Rituals, we have decided not to publish the lyrics. Sometimes it's good to let the listener's imagination work instead of sharing the lyrics immediately with everyone. But we can say they are about death, drugs and similar topics.

Is there any new music in the works or completed?

Yes, there is already our debut full-length in preparation. If everything goes well, it will be completely composed and recorded during this year.

Where do you see yourself and the band in next 5-7 years, is there a plan in motion?

In rehab or... maybe dead? Who knows? But if we will still be alive, won't kill each other or disband, we will probably gradually continue in creation of other forms of disgusting sonic terror.