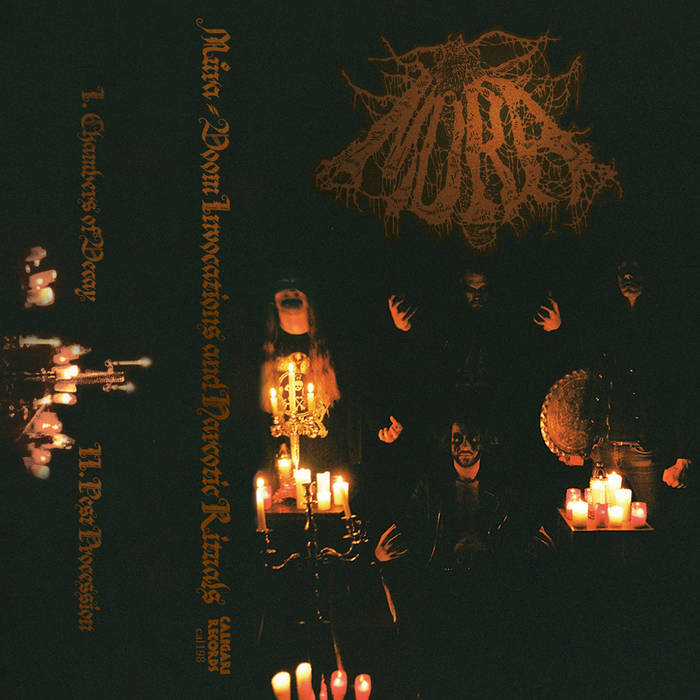 Můra, hailing from Prague, Czechia will unleash a crawling, massive EP on March 30th that will catch quite the attention of fans of death/doom. Dubbing their style as "Necromantic Narcotic Death Doom Metal", Můra has crafted 2 massive, slithering tracks that capture the decaying atmosphere of a forlorn, intimidating crypt.

'Chambers of Decay' is a fitting title for the track, as a wall of noise and drums slowly goes in crescendo until the drums pummel along with the guitars. Slowly, we are dragged along the chambers, like worms crawling on a fresh corpse. Sinister melodies, deep vocals (with some good variety), shrieking guitar leads and sudden blasts are all served in good measure across this 11-minute trip to the grave.

'Pest Procession' decieves at first with its dirge-like start, until very quickly becoming a frantic frenzy. Similarly to the previous tracks, it goes up and down in speed throughout its 8 minutes, but with far more variety. Particularly the drums here are worth of mention, as the use of low toms is key to the wide variety in atmosphere. And at the very end, this short release comes full circle, ending as it began. A wall of noise and drums fading out...

The atmosphere in this record is outstanding. It really makes you think it was recorded in the depths of a crypt. The drums pummel with reverb, the guitars are thick and the vocals are well executed, sometimes using high shrieks in key moments of the tracks. There's a variety of guitar leads and melodies scattered throughout both tracks that just enhance the experience. Not made to just show-off or for the sake of adding a solo, but to actually complement the atmosphere. In some ways, it reminds me of Disembowelment and their majestic album "Trascendence Into the Peripheral".

Featuring members from The Tower and Sekeromlat, Můra has crafted a short, but pummeling offering. Despite it being only 2 tracks, it offers more than enough to quench your death/doom thirst. It may drag a bit on its 2 tracks, but if you are a patient listener, you will be rewarded. So be ready.