Here is what Kriss said about their newest EP: "I think 'bout this album as a "path of descent". Dima brilliantly pick every of these songs we've covered, and we put'em in a certain order so it can tell some sort of a story. You can even say it's a concept album. Every track takes you deeper into madness and despair. We wanted it to be a reflection of a present times seen thru our own eyes but woven into those almost 100 years old songs. I guess we've succeeded." After reading such statement and Weird Tales being new to me I wanted to find out more. Dima and Kriss were up for the task so here we go.... 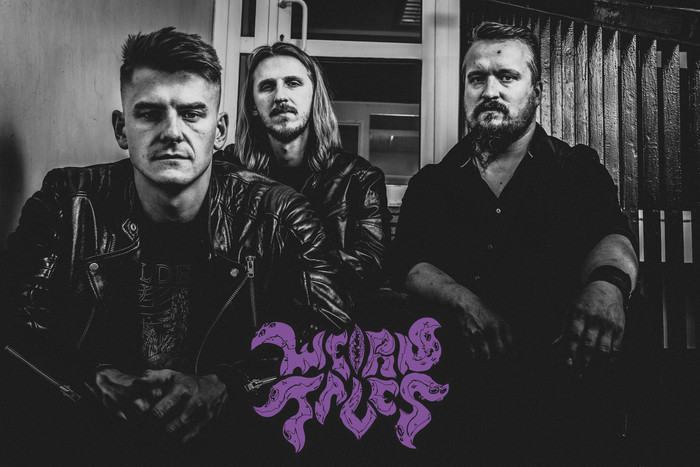 Thanks for taking time to do the interview. How's it going?

Kriss: Hello There. It's Kriss here, bass and vocals in Weird Tales. Thank you for interviewing us :D We're pretty good as for ongoing circumstances. Dust just started settlin' after release, but it is still too early to revise...

Dima: Hi, Dima is here – guitar and vocal. Thanks for having us.

Weird Tales as a name of the band is a little bit different, how did you come up with it?

Kriss: We wrote a couple of fitting names on the pieces of paper and then drew one which became our band name, and it stood the test of time.

So, no long and elaborate backstory (LOL) just trying things out?

Kriss: Who the hell knows? (laughs) Maybe American fantasy magazine, maybe the name of a song by Electric Wizard (which also is named after that magazine), or maybe the author was too much out of his mind. I even think that the band's name inspires us to tell weird stories....

Dima: Actually, yes, I wanted to tell weird stories. I had a lot of crazy shit going on. Who isn't on acid? Transferring this state of the world into the band alongside morbid riffs was the thing for us.

Let's talk about your newest EP, how long did you work on it and how was the whole process?

Dima: I came up with the first song long ago, in the summer of 2019. It had been waiting on the shelf for a while, since we were busy with other things at the time. We were rehearsing with the new drummer, preparing a full newly rearranged concert set, booking a tour and working on new songs for the 2nd LP. A crazy blues cover was interesting but there was no purpose to record it. Until COVID. All plans were ruined, I started listening to blues even more. Then I came up with heavy as reality riffs for the 'Hard Times Killing Floor Blues' song. Looked around and realized - now is the perfect time to create an album with deranged 100-year-old blues classics for this sick world.

How was the recording itself, how satisfied are you with the outcome?

Dima: We recorded it pretty fast. 3 days in the studio. It's a 20-minute EP. We tried to record live and without a metronome for the first time. I had this idea for a while, all our favourite bands from the 70's did it and I actually don't like clicking on computers, technologies and all that modern stuff, especially with rock n roll music that is supposed to be primal. And it was the best decision ever. Really enjoyed the process itself and the results. Now it's the only way to go for me.

How would you introduce new material?

Kriss: Some nastyfied versions of some almost 100-year-old songs... what more could you possibly want?

The title of your EP is well… quite peculiar, care to shed some light on the meaning?

Kriss: It means what it says.... Literally. We want to remind you guys that whatever you hear now is a straight-out descendant of dark gloomy blues that used to haunt the nights. And don't you forget about this....

Blues is a huge part of what Weird Tales brings and understandably main inspiration but what was your frame of mind when composing? What else contributed? Was there anything that surprised even yourself?

Dima: Obviously blues straight from cotton fields what leads us to disappointment, desperation, powerlessness and pain as main inspiration.

Kriss: With our songs there are always surprises and hidden references (it's up to you guys to look for it and I swear there's plenty) and with this album especially we wanted to stay true to the "mood" of the original songs while mangling them almost into state of unrecognizability so it would fit to the "Weird Tales" mold. It's all experimentation.

What do you think about all this categorizing and putting tags on music?

Kriss: I don't mind it if it works for somebody sure... I'm too far gone into "listening to whatever the f**k I want to" to care about tags and stuff.

You ended up with 'doom/stoner' but what would you call it yourself?

Kriss: You mean what tag I would put on our music? I guess ACID-DOOM-METAL fits just fine for what we do...But as I said, I'm not really into tags...

What does acid-doom-metal mean to you?

Kriss: It means that we can do almost anything we want, to put our music in whatever direction we want. If we feel that some unfamiliar with doom genre piece would fit a particular song and make it even weirder and more interesting why not...? 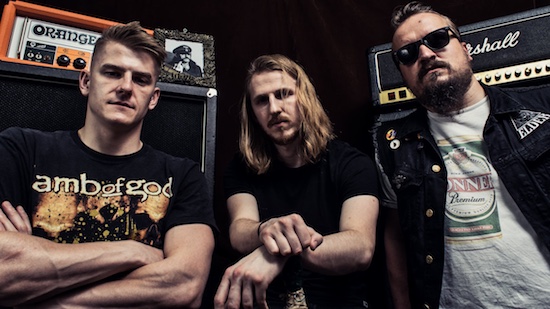 Why did you decide to write music, do you create it for yourself or for others?

Kriss: I guess every human being at some point has an urge to create something which he can call "self-made". If it's just scrambled eggs or a portrait of George W. Bush... What we do comes directly from that urge. And if people like or appreciate it, that makes it even COOLER!

Dima: I always created for myself and for those 2 junkies behind the scene.

What would you like to see or hear from people that listen to Weird Tales?

Kriss: I hope that when they listen to our music, they feel the same as I do when I listen to music. To take me to a band's universe, where they tell their stories.

Dima: I hope our listeners hear something different, something strange but familiar at the same time. And those poor ones who really dig our weird tales got minds penetrated.

When you play, do you play to build or to destroy?

Kriss: I play to keep myself from my destructive nature and creating alongside...

Dima: Play only to destroy, hail only to kill.

Which emotions play the main role when you write?

Dima: My feelings numb, and I feel apathy for everything not music related. And it's a fucking nightmare. Tripping dead.

Kriss: I have a lot of anger which I keep under a ton of indifference. That helps me function as a part of the society I live in. And because of this I lack appreciation and trust.

Dima: Last shot is only leaved

Kriss: Without any music? Is there any reason to live?

What about the future? How do you see it for yourself and for the band?

Kriss: I hope I will still be alive (laughs). And for the band? I hope we finally get back on stage and tour even further than we used to. And yes, we're trying to work normally under unfavorable circumstances of the last/present year. We hope to play concerts and actually work on new material for the next album.

Dima: Let us survive this pandemic and we'll see. The gigs returning is the most desired thing here. And we are working on new songs, experimenting with the new sound. We wanna strike even louder with the next LP.

Vinyl, CD and cassettes. What is your opinion about the physical media, which one do you prefer?

Kriss: I like collecting vinyl and CDs, but for example, beach party music from mp3 would do as well... That all depends on the circumstances...

Kriss: Hang in there guys \m/

Dima: Hope to see you at a gig sometime!