Altered Dead are an OSDM band from Canada who released their second album "Returned to Life" (Read the review here) in January. This album exudes such a wonderful old school flair that I couldn't resist asking the band about it. Through their friends from Begrime Exemious I asked if an interview would be possible. Thanks Derek for that!!! That's how I ended up sending Mic (voc, bass, guitars) a few questions about the album and beyond. 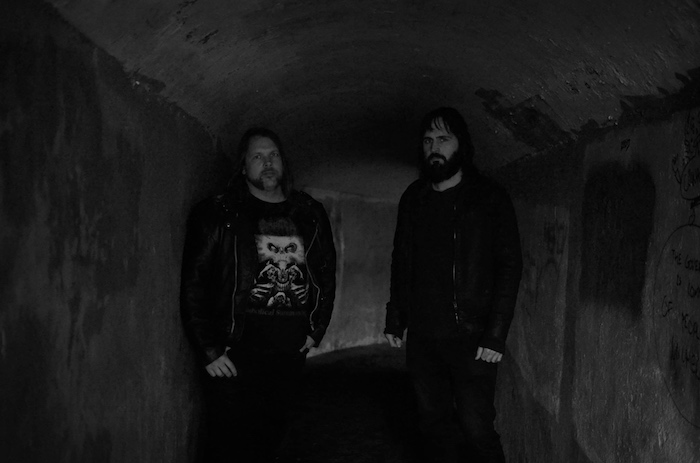 Hey, thanks for answering my questions - You have recently released your second album "Returned to Life" and you've received quite a lot of (good) feedback for the album. Were you surprised about that?

We weren't really thinking of that end of things, just happy to have the record out. So, having been 2 months out we can reflect on that, it was a bit of a surprise for sure. It's good though.

When I compare your current album with your debut "Altered Dead", I find that you have made the songwriting much more varied. Would you agree with that?

We kind of look at it as an extension of the first album. I think there's a bit more urgency to the songs on this record, but that's, I think helped by the play length. But hey! Some records that have stayed with us over the years are half this length, haha.

I would say that this time you've incorporated a lot more influences that don't come directly from the death metal realm. First of all, I notice the slight punk influence, but also Slayer and of course some doom that was already on the first CD. Am I right with that?

I don't think so. I think it's just being used with a different attack in the riffs but overall that sound is part of what we have been doing. They are a ton of fun to play on, on guitar, drums maybe not so much, hahaha.

"Returned To Life"? What are your lyrics about? When I look at the cover, I would spontaneously say Lovecraft.

The general theme on Returned To Life was the idea of impermanence. The erosion of life and the and the connection shared in death, there's also an element of the grotesque rolled in there for good measure.

I am a passionate CD collector, where can I buy your CD? At Bandcamp there is only the digital version.

Sure, you can definitely find it here http://memento-mori.es. You can also reach out to us directly on our social media, "we are working on a website..." or email AlteredDead@hotmail.com (yeah that's right) you can find some cell phone pictures of the long Sleeve Shirts and the CD.

Did you have problems with the completion of the album because of the pandemic?

We played a benefit show at Cavity Curiosity early march and there was already a sense of unease but shortly after that it was locked down, a lot of people lost their jobs and we were included. We had our time already booked with Cody, so we did what we set out to do.. It would've felt strange if we had more people in the band, but it gave us something to occupy our thoughts.

You have a pretty big underground scene in Canada. Do you help each other out in times like these?

We have some friends across Canada. A lot of whom are killing the game with their bands, but it's also spread out. I think the best support you can do for one another's music is to rep them if you like it, share stages and to welcome them in from the road (whenever that happens again).

Do you have plans for the hopefully near future, when the vaccinations are advanced, and you can do something again? Concerts, new releases or so?

First order of business would be to get everyone in the community together and play an all-day gig and hang out with folks again. Continuing on writing the new album and letting life deal the rest.

Last but not least, a few selection questions. Maybe you can tell a little bit more. Swedish or American death metal?

Black Sabbath with Ozzy or Dio (or maybe Tony Martin)?

"Reign in Blood" or "South of Heaven"?

Never heard of them. Slayer!

So, those are my questions. Thank you very much for the interview! What else do you have to tell our readers?

Yes, we are grateful and humbled by the response. So, much appreciation to anyone who's come across our band, and it just worked for them, thank you. To the folks who stayed patiently waiting for the new album, you fuckin rule! Either way you.