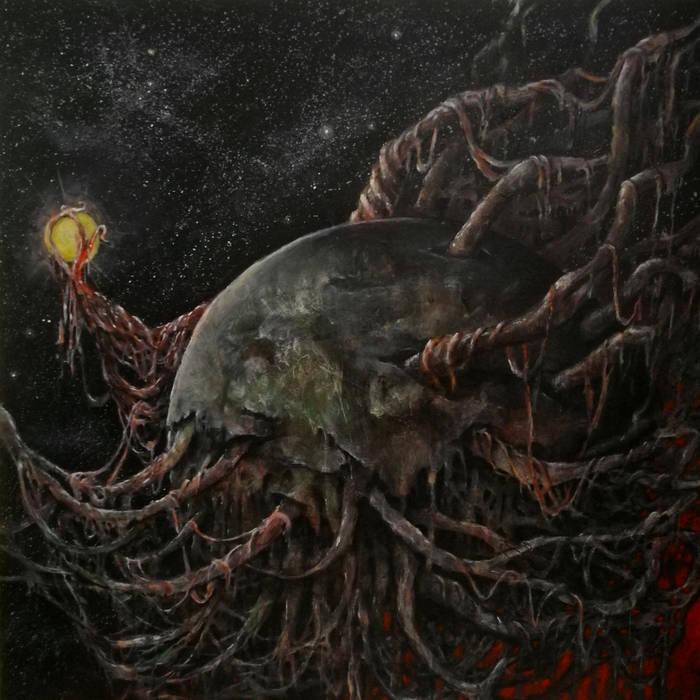 How fitting the artwork is for what you're about to hear on Altered Dead's second full album. Dirty and ugly, thrashy, death with a few overcasts of doom and black/death, Returned To Life is quite an impressive album for a duo that uses the very basics of the genre.

Spanning just about 33 minutes, with a total of 10 tracks, Altered Dead spawn and poke at the gruesome life form with a creepy intro that quickly moves into straight late 80s thrashing death metal. No bullshit just kicks to the stomach and temple. Not the easiest of songs to stomach for someone not used to this kind of music, but if you've been in the swamp more than a few times then you should have no problem with this grime and rot. If you're already turned off by the artwork, then don't expect the music to resemble anything like a bouquet of flowers, only hideous, fast, offsetting and ravenous songs await to be heard on Returned To Life.

You'll run into tracks like 'Final Pathogen', 'Thawing in Agony' and for me the real nasties on the album, 'Prosodemic Realms' and 'Rotting Outwards' that'll make you do a 360 straight back to the late 80s. Then you'll get some surprises tossed-in as a bonus. They keep things interesting for the full run so you never get tired. Can't help but to re emphasise how old it feels and sounds which is great given they got the musical know-how and the production to match, so you get an album that feels and sounds sincere to an era when thrash was beginning to rot. 'Rotting Outwards'?, I mean isn't that a disgusting enough title, then you take these contrasting vocals that slap each other around, with one being of the death metal stomach growl and the other being of a nasty black metal gasping snarl of sorts, and to match, the fucking drumming is just wild but moves about so smoothly, how could you not love this monstrosity?

The guitars are mixed really high and give the album a unique feel when you factor in the buzzy rough edged tone it has accompanying it. However, you can hear just enough of the vocals so they don't really get in the way even though the album appears to be more about the riffing carnage and the drumming disturbance. I think '...Of the Oppressed' does a fantastic job of highlighting all of Altered Dead's strengths but more specifically their ability to alter the tempo and rhythms so easily. This song begins as a doom metal sermon then picks up pace into a death/black metal crack parade and declines to doom once again towards the mid section in which they throw in a slamming breakdown of sorts to mess with your headbanging motion.

And what better way to end it all than with a commendable cover of Celtic Frost's 'Into Crypt of Rays'. Not only does the style match Returned to Life but the choice of song sounds like it could have easily been as an addition to the themes behind Altered Dead's work on the record. Returned to Life is an interesting upcommer and also quite an impressive one. Makes you want to go back and check out their previous work. A Memento Mori release coming out January 25th on CD and vinyl version February 28th on Fucking Kill Records. Might want to snag that one, I get the feeling it'll go fast.