French death metallers Akiavel self-released their second studio album "Væ Victis" on April 23. Their monumental new opus comes only one year after their debut album and is a dark and twisted affair lyrically exploring the depths of human depravity and delving into the darkest parts of the human psyche and musically further evolving their sound taking a radical approach to their musical assault, consuming the listener with dizzying maelstroms of chaos. "Væ Victis" embodies the word "death," putting forth an intrusive battery of blistering guitars, pummeling drums, and scathing vocals that culminates in one of the most robust death metal records the genre has seen yet. Auré (vocals) and Jay (bass) answered a few questions about the album, creation of it and all things around it. 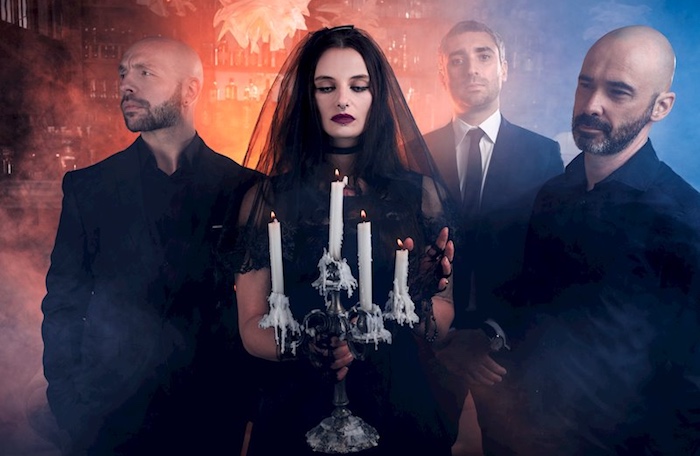 Thanks for taking time to chat a bit, how is Akiavel doing after the release of the new album?

Auré (vocals): Hi! Thank you for taking time for us! It's going very well in Akiavel's camp, thanks for asking! We are pretty much focused on the promotion of our new album Vae Victis.

Jay (bass): We are really happy and proud of this second album, we hope it will please our existing fans, and convince new fans to follow us!

What is the story behind the name of the band, what is Akiavel?

Auré: Akiavel is a word derived from the name of the famous Italian humanist and political thinker Nicolas Machiavelli, mainly known for what certain might call "cynical" or "amoral" political theories.. We loved the ending in "EL", because it reminds of the archangels. We wanted to recall the half-angel / half-demon side of our music: aggressive and violent on one side, melodic on the other side.

Jay: Also, the "EL" sound means "she" in French, which was funny for a female fronted band (laugh)

Let's talk about your newest album, how long did you work on it and how was the whole process?

Jay: After the release of the first album V, in February 2020, we had a full tour scheduled, but unfortunately the pandemic toppled everything. During the confinement, rather than remaining frustrated, we composed and worked on a second album. The composition of the music was really fast, fairly quickly everything was almost fully written, and we arrived at the step of arrangements and rehearsals (remotely, of course!). This was relatively fast, notably due to the successive lockdowns. This was one of the few advantages of the current situation… And we love the outcome, we hope you do too!

Auré: It took us a little less than a year to compose and record the album. As to the lyrics, I focused on the serial killer's theme. We were stuck at home, so I took the time to watch documentaries and read tons of books on this subject. For my part it was really interesting to dive into the brains of such monsters. Containment gave us time to work on this album quietly but fast!

Jay: Our fans appreciate our music because it is a mixture of our 4 influences, which are death metal, thrash, hardcore and heavy metal. Each of the 4 members come from one of these "worlds". Akiavel is the result of the mixing of all these types of metal.

We have actually created Akiavel' style with our first album V, without being aware of the way all this would actually sound once put together. The result was, at least to us, crazy, raw and powerful. For this new album, Vae Victis, we kind of knew what such mixing would create, so we took advantage of this knowledge and dug way further into our personal and collective style. So, you can basically expect something ever rawer and more powerful than our previous album. And always with Auré's stunning growling voice, of course (laugh)

What is the meaning behind the title of the album?

Auré: Our latest album is called Vae Victis. It's Latin and could be translated as "Woe to the Vanquished". Basically, this relates to the victims as well as to serial killers.

Auré: For the lyrics, each track is about a different serial killer, we are telling their stories in different manners. We took this subject very seriously and talking about them doesn't mean we do not consider them as horrible monsters. We just wanted to describe some of the mechanisms that were behind their silly acts, but overall, the whole album is a tribute to the victims.

Jay: The composition of the music is very natural; it is just the mood of the day that leads to the composition to this or that riff by Chris (guitars) or me. Then we submit them to Butch (drums), who add his parts on our raw ideas.

Jay: We are influenced by everything we hear or listen to; we have no boundaries when it comes to composing. The only goal we have is to compose the music we actually want to listen to; we don't think in terms of influences. As we said, our 4 musical backgrounds are very different. When we compose a track, we try to think with the same eyes as each of the other musicians: knowing he/she likes this kind of music, what would he/she play on this or that part? This is very helpful to obtain and keep Akiavel's consistent style (laugh)

What do you think about all this categorizing music?

Auré: I think it helps people "understanding" or discovering new bands when it's labelled death metal or melodic metal or whatever, and it might help bands like us being discovered in their home countries or abroad. For bigger bands, I think the question is not really a big deal though.

What would you call your style yourself?

Jay: People tend to call us melodic death metal. It's way too small and limited for us, since pure melodic death metal songs are not supposed to include hardcore or even pop music riffs, but we do accept this labelling, which is not completely wrong (laugh)

Auré: I think it is an invitation to listen to our music to realize how inaccurate labelling are (laugh)

Jay: We are all 100% focused on Akiavel, which is demanding enough (laugh)

Auré: We do not expect anything, but we do hope they will like the new album as much as we do!

Jay: We cannot wait to play live and share our music on stage, we will now have 2 full albums to promote on stage! 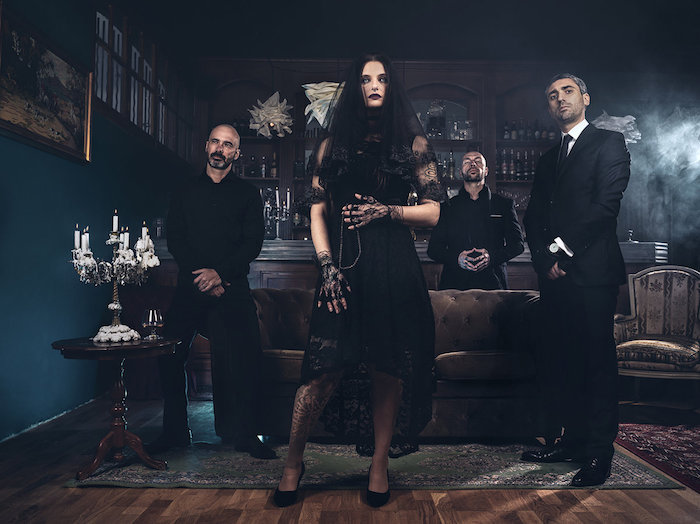 Auré: Good question! I'd say that we want to create good music and share it, which is a positive state of mind. We do not need to destroy anything to play our music and grow as a band.

Jay: Yes, but we made a cover of "Destroy Everything" during our first live appearance as Akiavel, in June 2019 at the Off Hellfest festival. Who can tell that it was not a prediction? (laugh)

Auré: For the writing of Vae Victis, I went through all the emotions. Anger, rage, sadness, compassion… It's not always easy to be a lyricist when you enter a field as realistic as crimes. But my lyrics are made to be howled, so it's a good outlet!

Auré: Depression… (laugh) Music is with me throughout the whole day. From the moment I get up, at work and until bedtime… It's just vital to me.

Jay: Without our music I would... record music for some other bands (laugh). That is actually what I'm beginning to, since we launched Akia Studios a few days ago, and I'm in charge of it, and the start is very positive, with a lot of cool bands to record there. As you can see, music is also a big element in my life (laugh)

Where do you see yourself and the band in the next 5-7 years?

Jay: And continuing growing as a band by playing the music we like together. Because it's weird to say it, but we are the 4 greatest fans of our own music (laugh)

Jay: First we are working on the promotion of this album. We released one music video in early April, and are going to release another one in June, and then a third one by the end of Summer.

Auré: And we will also shoot at least one live session by the end of the year. Then will come 2022, and either we can tour (at least!), otherwise we'll go back to the studio (Akia Studios of course!) for our third album… This pandemic won't preclude us from composing and recording the music we love!

Most labels and bands release their new material on CD, vinyl and cassette. Vinyl is coming back some say but for me it never went away just like cassettes. What is your opinion about the physical media, which one do you prefer?

Jay: We all are from the generation of cassettes and CDs, and we still love to listen to music on CD. But we must admit digital platforms are extremely convenient ways to listen to music everywhere (laugh). I personally like the contact of the object itself, the booklet, photos and lyrics you can discover while listening to the music. This is a different experience, a different way of listening to your favorite albums.

Auré: For this reason, both albums (V and Vae Victis) are available in CD versions as well as on vinyl editions. You can check everything out on our website www.Akiavel.com!

Auré: Thank you for your interest in us, do not hesitate to discover our music and videos on all usual platforms as well as on our website!

Jay: We hope we can soon meet and play our music live in the US!