In the current landscape of extreme metal there's musical diversity and pushing the boundaries of the genre, as well as zealous devotion to staying "TRVE KVLT". Sweden is often seen as a wellspring of music, especially rock and metal, and today there's Dödsrit, a band that stays true to metal while expanding beyond purism to carve their own path. 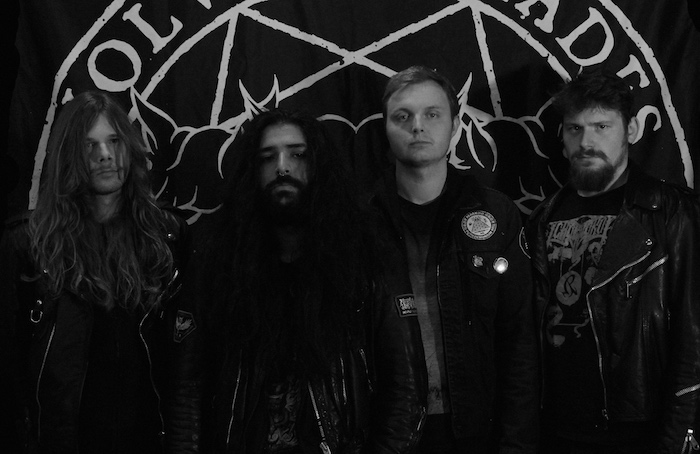 Many sites like Metallum and YouTube channels classify your band's sound and style as blackened crust or being punk influenced, but aside from that I've also noticed your music is also very melodic and atmospheric, are those labels something that bothers you?

Not really, we don't care or pay attention to what labels people put on our music. In the end, we write our music the way we feel resonates best with us, and not according to what is "right". I think the beauty of music and art is that it can be as limitless as you want it to be.

In that same vein, is this particular sound, being very punk inspired and also atmospheric something you did on purpose or was it a fortunate accident?

I think it just happens so naturally. When writing our songs, we try to create a story/journey through soundscapes and therefore keep it diverse. I guess that's also one of the reasons why our songs tend to be quite long as well haha.

Dödsrit is a somewhat unconventional band in black metal. Do you feel like an outsider or is that isn't important to you?

I have to admit, we never really looked at it in that way, but it's not important to us at all. We create music because it helps us express our emotions and thoughts, not because we want some kind of recognition.

What would you consider the best and worst aspects of the black metal scene? (bands, fans, critics, etc.)

I think the best and worst aspects are quite the same for every scene. I think the biggest difference would be that the black metal scene is quite controversial in a lot of aspects but, ironically the same could be said about hardcore. For a scene that pretends to be very inclusive and autonomous. I've unfortunately seen quite the opposite multiple times. But aside from that, I've also met quite some individuals and bands through the years that I consider good friends or respect a lot, both in the black metal scene and in other scenes. Even if we might not be into the same artists, there would still be more common grounds we could find ourselves in.

I would like to know about your non-metal influences and if other types of music outside of rock influence your work.

There's been a few! Some of them might still be somewhat in the "rock-influenced" territory, but worth mentioning are Giles Corey, Pygmy Lush and Godspeed You! Black Emperor.

When you released your first 2 records, Dödsrit was a solo studio project, now you have both a full line-up and a more active presence online, how did that come about?

I guess Christoffer started missing the aspects of playing together with like-minded people, which I get. Me and Christoffer have been friends for a long time, and share quite similar views and dogma's, so it made sense for us to do this band together. It was of course a bit of a gamble considering the distance and all, but it turned out just fine in the end. Regarding social media, now that it's two people taking care of it, it does indeed show a slightly more active presence.

We're all tired of the COVID situation, so instead I would like you to share what can people expect from a Dödsrit show when they become possible?

What brought your decision to switch from a bigger label, Prosthetic Records to a smaller label like Wolves of Hades, and how is that deal working out for you?

Since I run Wolves of Hades and took the production of the album under my wing, the rest of the band felt it would make the most sense to release the new album ourselves and see how that would go. Of course, there are always pros and cons to doing things yourself, but we felt it was worth doing so, nonetheless. We come from a DIY background after all.

The full lineup is predominantly Dutch, does that mean you moved out of Sweden, or are you managing with having a full band in another country?

Christoffer is still living in Sweden, despite the distance, it hasn't been much of a problem for us. We still write music together remotely by sending ideas back and forth, and occasionally meeting up for some days. It's quite nice to escape Amsterdam's concrete and neon lights every once in a while and be isolated in the misty forest of Borlänge.

How did Dödsrit come about? What is your vision of the project and what are you trying to express with it?

As far as I know Dödsrit started soon after Christoffer's former band, Totem Skin, disbanded. (Some of) the material for the first album was already written during the time that Totem Skin was still around and knowing Christoffer's vigor to create music it didn't take long until Dödsrit became a fact. I have to admit that explaining our vision is quite hard since there isn't exactly a dogma that feeds our musical drive but, we do use this music to express our burden and grief.

Do you feel black metal should evolve beyond Satanism and Paganism or is it better for each band to do what they wanted?

Everyone should do what they want. After all, music is a form of expression without boundaries, despite what other people might think.

The new album is quite a beast, and a very different direction, I can still hear your D-beat and ambient tendencies, but in some areas is much more blackened and melancholic but no less savage, can you share how the new album came to be and if composing and recording with a full line-up spiced up the process?

Luckily Christoffer and I have a very strong synergy when writing together, so that went quite naturally. One thing that made a big difference was that we recorded some demos before heading into the studio. This gave us the benefit of being able to dissect the songs even further and rework many details.

Following that, how would you compare doing the first 2 records by yourself with the new recording with the full lineup?

For Christoffer, it was quite a relief actually haha, one of the benefits of having a full line-up is getting honest feedback and ideas from other members. I have to admit that sometimes this can also feel like a drawback when people disagree on an idea, but in those cases, it's usually best to try and find a middle ground.

What's next for Dödsrit in general? Are you working on the next record already, or are you branching into other projects?

We're always writing music as we speak, whenever it's for Dödsrit or any of our other projects. We haven't thought yet about what kind of release to do next, time will tell.

Black metal seems to be stirring the pot less with Satanism but now with politics, be it right-wing people decrying bands that are espousing or supporting progressive causes, or left-wing people accusing bands of being far-right or sympathetic/apathetic towards extremist politics, what's your opinion on that? And furthermore, your band itself was signed to the overtly political label Alerta Antifascista Records, who released your debut, and later Prosthetic Records for your sophomore, so, would you say Dödsrit is a political band, or are you simply a supporter and your band is a separate entity?

We've never made it a secret that we're antifascists, and it's also no surprise that many artists or labels denounced/showed their disgust towards fascism/NSBM, even those who consider themselves or their music "apolitical".

Despite having quite, a controversial history, most people who have an interest in the darker and more violent side of black metal of course don't agree or sympathize with fascist politics or any actions of the band (-members) but simply enjoy the music. It's a bit of a predicament, but I think we have more important topics to worry about than what someone is listening to. For example, institutional racism, modern-day slavery/exploitation of workers, the ties between police and politicians with fascist/white supremacist movements, and so on.

I'm not sure if we would consider ourselves a "political band" due to our lyrical content being more focused on personal topics, but on a personal level: 100%. There shouldn't be a place for xenophobia, apartheid, totalitarianism, and such in this world. History has shown us what it has done in the past, and what it is still capable of.