Carcassbomb wrote in his review: "Ocultum has a lo-fi approach to their music that I find really intriguing, with vocals more suited to raw black metal than doom metal. It's oddly endearing and prevents it from going the same stale route as many other bands currently are, with the wide Mastodon/Gojira vocal styling. There's something different here, it's dark and it's anti-marketing in its presence." After reading this I had to ask some usual questions but what I got back from Sebastian Bruna (vocals/guitars) was more than I expected. 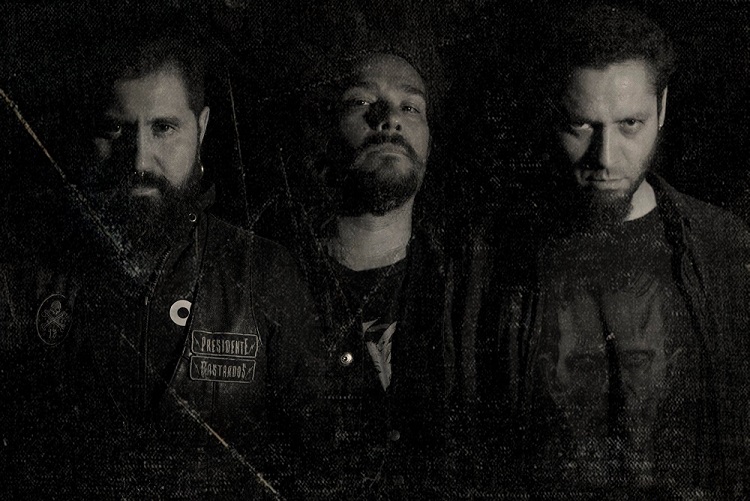 Thanks for taking time to do this Sebastian, how are things in Ocultum right before the release of "Residue" on vinyl?

Hi Tomek! How are you bro? Right now, we're preparing to release the vinyl version of Residue!!! That's a big step for us, we deliver some fucked up doom and no childish tales of false rock n' roll, so expect something legendary! Also, we're preparing a new album… yes, a new album, and just expect more heavy riffs and insane atmosphere fueled by heavy thinking and dope!!

Let's talk about "Residue" a bit, how long did you work on it and how was the whole process?

The basic composition of these songs was made by me a long time ago, then we developed the songs into something more cohesive with the drummer, who found exactly the beat and attack of these songs, then the bassist put his atmosphere and heaviness and we came to our tone and rhythm. The process was great! Highly stoned and focused on getting what we wanted, we kicked a lot of asses with our music when it came out, so now we're cool. Residue took something like 6 months to be ready. The recording was extremely easy, we smoke a lot of weed and drank massive amounts of coffee, we play with sounds, amps and effects and achieve the tone that make scene's legs trembling hahahaha

You mentioned that new album is in the works, what can bangers expect from it?

Endless kicks to your skull in the form of slowed down punishment and sound degeneration that opens portals to cosmic misery and that will make you reborn understanding that we come to stay and burn good weed ... and that this does not stop!!!

Why "Residue"? Is there a specific meaning behind the title?

Residue, as its name implies, expands its concept to a lot of uncomfortable matters for the citizen well embedded in the system. Initially the toxic waste, the shit that the human being has allowed to flow on the planet, both chemical and spiritual, so this residue expands day by day in front of the sight and patience of governments and militias, we are so screwed up that you wonder if finally the waste is you too, being the last of the chain, the drug addict on the street, the one who eats from the garbage and those who are segregated for being different. Then the concept becomes one. The cocaine that reaches our country is hardly cocaine, and the residue of this fake cocaine has thousands of zombies smoking in the streets: They are the residue of the residue. And so, those who have a better life at the expense of others, are the residue of the monetary system and treat the rest as waste. The cover says it all ... a scavenger bird eating human remains.

Was all this shit an inspiration to you when you were writing? What was your frame of mind when composing?

I think without a doubt the state of mind came from heavy drug use, but the main inspiration comes from the underlying feeling. Sometimes sadness, many others an irrepressible rage for unjust acts in my life and in the world in which we live. Situations from the past too, brutal experiences of other people, stories from people I've known and some Buddhist legends about monks singing while organs are removed from a dead person...

Was there anything that influenced you differently while composing?

In fact, a lot of blues. A lot of older blues ... a lot of horror and war movie influence. Pink Floyd, Melvins, ELP ... to name some of the many non-metal bands that influence me.

What is Ocultum? What is the story behind the name?

I'm a heavy reader so I found this strange concept that the earth has an entrance to know a hidden civilization, the VITRIOL has this words "Occultum Lapidem" attached to it, so I cut into Occultum and to make it more unique I erase the C. I like that all the things that they fear is occult. Any taboo, drug or illegal action. So we're part of that. We are those they fear. The Ocultum.

Some guys out there like to put tags on bands and so you ended up with ‘doom' tag. What do you think about all this categorizing and putting tags on music?

I think it is necessary so that you can search for the music that you like, but when it influences what music, you want to make, most fall into the formula. They believe they have to play in a way to maintain this label. Unfortunately, in Chile this is the case, so Ocultum is seen as an expatriate band ... we take the risk of doing something beyond labeling.

The very questioning of this is a problem that must be eradicated. I see this shit as a very powerful shit that should come out no matter what, not remain floating as something possible or mouldable, not think that it pleases someone or me, sometimes the energy you have to create something does not have much of thought, but more of action.

Do you play to build or to destroy? Which emotions contribute the most?

We play the sound to edificate a crumbling. Hate with the outside world, and a lot of resentment with the way the world is ruled. A lot of hate for shit talk people. Very few sadness and grief.

If I stopped being a musician, I would go back to being a writer, maybe an actor, or a serial killer. Something that causes deep emotions.

Where do you see yourself and the band in next 5-7 years, what are the plans for the future?

Have 5-7 more albums, travel the world to play our music, meet people who support us and create communities around our music. The plan is to continue non-stop; we have a lot of music!! Make lots of friends and continue on this path to the end. Right now, we are about to release an EP ... which we are seeing will become an LP hahahaa, we are trying to make shorter songs, but we are still in the "trip" format! That and playing live outside of Chile, outside of South America, outside the planet. Also, we have another album ready… we have a lot of stuff to record.