German – Swedish thrashers Protector don't need further introduction to the firm readers of MetalBite. After it became a little bit silent around the band after their 2019 album "Summon The Hordes" (blame it on Corona) they became quite active again and Martin told me that they are writing for a new album. Reason enough to ask a little bit more in detail about this joyful event. Carl-Gustav "Calle" Karlsson (drums), Mathias "Matte" Johansson (bass) and Martin Missy (vocals) took the time to answer my questions. Thanks again for doing this! 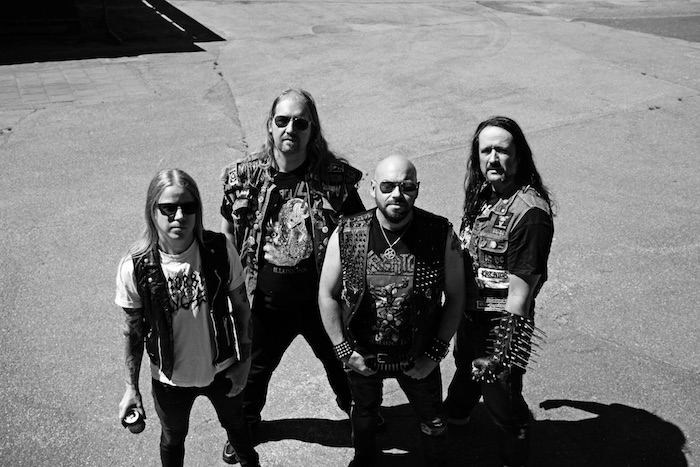 Martin, you told me that you're going to record a new album in November if everything works. Can you tell a little bit more about it?

Martin: We will record 11 songs in a studio here in Stockholm in the end of October / beginning of November this year. The album will be released by High Roller Records in 2022.

Do you already have some song titles for the tracks or lyrics you can talk about?

Martin: All song titles and the name of the album are ready, but we will release them on a later date. After all, the record will probably not be in the stores before (late) summer 2022.

Where are you going to record the album and who will be the producer this time? Will it be Harris Johns or Patrick W Engel who is responsible for the mixing? Or is it somebody totally different?

Calle: We will record in Robert Pehrssons Humbucker studio in Stockholm. Patrick W. Engel will do both mix and mastering this time.

What about the artwork? Is it created by somebody you already collaborated with or somebody different?

Martin: This time it will be the Swedish artist Patrik Tegnander who will do the artwork. We haven't worked with him before, but I like his art.

You usually perform a not too serious track on your records, like 'Space Cake' or 'Glove Of Love' from your latest output "Summon The Hordes". Will there also be such a track on the new album?

Matte: Yeah, that's an old tradition of the band. 'Space Cake' was first on the Golem record. Then we had 'Molotow Cocktail' on Urm The Mad. On the coming album there will be no track in this style. But maybe there will be some sick track in the future, we'll see.

Can we expect some surprises concerning the songwriting on the new album, or will it just be the "regular" Protector songs?

Matte: Well, I think it will sound as Protector. But I also think that there is some really fucked up VOIVOD influences in at least one of the new tracks. Protector has always got a quite unique sound. The mixture of thrash metal and early death metal and hardcore. The new album is mostly in the thrash metal style. On Summon The Hordes we had some death metal influences just as on for example Shedding Of Skin.

Calle: We are very old school in creating music, most of the time we are in the rehearsal room and work out the riffs in the old way. So, all members are contributing to the songwriting in one way or another. I do not know if we have mentioned it before, but Martin Missy has more and more given us ideas via recorded files to us which Martin has hummed into the mobile and then sent to us. We listen to these files and turn it into riffs. It's hard to say how we sound from album to album, but Protector sounds like Protector.

Martin: I think that there will be no big surprises on the new album. If you like our last three albums, I think you will like this one as well.

You are going to release the record on High Roller Records. How satisfied are you with their work for you? I was quite happy that they re-released your old albums in 2015 because I only had them on vinyl but I actually don't have a record player anymore because my wife forbids it, haha!!

Matte: I think High Roller Records is one of the best metal labels out there. They only release true metal, a lot of old NWOBHM rereleases and I actually have bought a lot of them since I'm a big NWOBHM fan. They also have rereleased a lot of old thrash metal classics. Their releases of the old Protector albums are really well done. And I really like everything about them.

Calle: We are very happy with High Roller. They are helping us with almost everything that includes record releases. They release our entire catalog, advertise and promote and help as best they can. The contact between us and the High Roller crew could not be better.

Martin: High Roller is a great record company. They are easy to work with and always get back to you quickly, if you have any thoughts and questions.

This year "A Shredding Of Skin" is going to celebrate its 30 years anniversary (fuck, we're going old, don't we??). Do you have any plans to celebrate it?

Martin: There are no plans for this yet. On the other hand, we didn't celebrate the anniversary of Golem either. Only when Misanthropy had its 30 years anniversary, we did some shows, where we played the entire EP. Because Misanthropy was our first release, it will always be special to us.

Talking about concerts, what would you say – are there still younger fans coming to see you or is the audience aging with the band?

Matte: Yeah, there is a great mix of fans. Both old men as myself and youngsters. So, I think this style will survive for a long, long time.

Calle: I think I see a lot of young people at our concerts, and its great fun that there are younger people too who seem to like our music. But mostly it is the older generation who come to our shows. So yes, many have aged with the band and have grown up with our records. It's a great feeling indeed. It's cool that we've been able to reach out to a few fans over the years. We are so grateful that fans support us and still believe in us. They are the most important thing for us.

Martin: It's like Calle and Matte said: We have both older and younger fans at our gigs, although the older fans predominate the audience. Another interesting thing is, that we also have more women in the audience now. Back in the 80's it was like 99% guys at our gigs.

Which are the evergreens that you have to play at your concerts?

Matte: I think there is some tracks that we must have in our live set as for example 'Misanthropy', 'Golem', 'Shedding Of Skin', 'Protector Of Death'. But we change the live set from time to time.

Martin: The songs that Matte and Calle have mentioned, and of course 'Kain And Abel' as well.

Martin: Actually, there haven't been happening too wild stories when we are on the road, in the studio or playing live. No televisions sets thrown out of hotel room windows and stuff like that. We are a quite boring band that way.

Can you name a few albums that had massive influence on you and which you wouldn't like to miss in your life?

Matte: Ok there is a lot of albums that are really important to me but I'll list only 10 of them.
Destruction - Infernal Overkill
Voivod - Killing Technology
Kreator - Pleasure To kill
Slayer - Show No Mercy
Morbid Angel - Abominations Of Desolation
Necrodeath - Into The Macabre
Metallica - Ride The Lightning
Celtic Frost - Morbid Tales
Dark Angel - Darkness Descends
Venom - Welcome To Hell

Martin: When it comes to influencing my work as an artist; I would list these albums:
Venom - Black Metal
Possessed - Seven Churches
Slayer - Reign In Blood
Exodus - Bonded By Blood
Sodom - In The Sign Of Evil
Celtic Frost - Morbid Tales / Emperors Return

Finally, Martin, what do you think? Is VFL Wolfsburg able to become German Soccer Champion this season (the male team)?

Calle, Matte and Martin: Thank you for doing this interview with us. Stay Metal!