Dutch experimental metal duo Prospectors, recently launched their first album "Proven Lands" (read review here). It is quite a tough one but really worth exploring. I had the chance to get an interview with Matthias Ruijgrok (bass, synths) to get more into detail about the album and its influences. Hopefully this interview will help you dig deeper into the world of Prospectors - have fun exploring it! 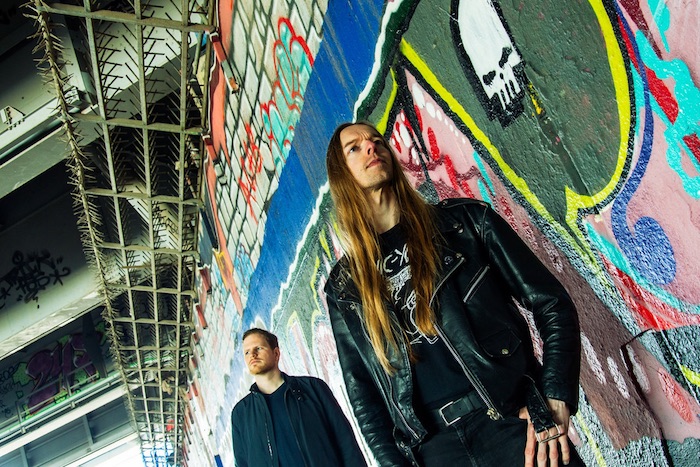 Hey guys, thanks for doing the interview. How are you doing?

Thanks for having us! Things are reasonably well over here. Our release has been out for about three months now and the reception has been positive so far!

You've just released your first album "Proven Lands" which is a pure instrumental album. What was the intention for it? And what was the (musical) inspiration?

For us, Prospectors is about discovering new ways of composing and arranging music. Creating purely instrumental music was a novelty for us, a nice challenge, but at the same time freeing. Lacking vocals as the usual anchor for the listener, you have to think of different ways to keep things interesting and maintain flow and coherence. It also leaves a lot of space for the individual instruments to develop their parts. Since the musical side is our focal point, this approach was a logical way to go for us. We're actually also inspired by a lot of purely instrumental music, ranging from bands like Dysrhythmia, to contemporary classical composers such as Krzysztof Penderecki and Steve Reich.

How did you come to the idea to do such experimental stuff? I mean you are involved into some Dutch black metal bands and this is quite a different musical approach.

It is indeed, and that is exactly what also appealed to us. The two of us share a longtime interest in experimental music, so it was quite a natural development to expand on that side. While we still like our black metal a lot, sometimes it can be a bit of a narrow frame to musically express yourself within.

Is there a red line behind the album?

There's certainly a red thread in the way the album is put together. It is written and intended as a whole, so we tried to keep some flow going from track to track as well. For instance, 'Become Void' serves as a sequel between 'Descent Into the Unknown' and 'Monolithic Structures'. That's the quite tangible thread.

Besides that, the album's core aesthetic idea is represented by the artwork. It is ever changing, yet always motionless, it is familiar, yet unknown, it is focusing and adapting, but also disorganizing and disorienting. It is acting, but also observing.

Do you want to tell some stories with the music? When I listen to tracks like 'Ravelling Motion' or 'Become Void' I get certain images in my head.

It is a journey of sorts! As stated before, the musical side is our main focus, not so much any specific message we want to get across. We might for instance start the songwriting process with a theoretical idea or musical concept that intrigues us. You could in some sense say that we translate these abstractions into something relatable, into music that could also provoke images and emotions. In the end, because there are no vocals and there is a certain degree of abstraction, it is always good to hear that the listener has a personal experience when listening the music by for example, as you say, picturing certain images.

What I can further add is that the song titles convey some kind of vantage point for the listener to approach the tracks. Whatever one experiences is in the end still mostly open to oneself, I think that is the very beauty of music.

Nice question. We are searching for the proverbial gold; it is a kind of alchemical theme. That is, prospecting in the sense of refining our methods to create gold out of the rubble.

Can you tell a little bit more about the cover? Is it a cave one is trapped inside or what is it?

The cover art portrays continual motion, in the form of the number eight (or a lemniscate, a symbol for infinity). It is based on an idea that the universe is maintained by the motion of ongoing change. It is very apt for how this album came together, through a long process of restructuring and refining. "Proven Lands" resonates with that idea of 'stability through change'.

What about the title - is there some irony in it to call it "Proven Lands" and leave the well-known territory of "typical" metal? I mean if you match the music with the title, it's some kind of oxymoron if you know what I mean.

I can see where you come from with that question. Interestingly, we see it from the opposite angle: "Proven Lands" is still clearly rooted in Metal, and more specifically, riff-based songwriting. The album title would probably make more sense once we have our ideas for future music with Prospectors out. Our ambition is to delve even more into unexplored terrain and stray further from the Metal territory.

As I stated in my review, "Proven Lands" is no easy-listening album and needs to be explored. What would you say it the best atmosphere to dive into your music?

I think it would certainly help to not have too many distractions going on while listening to the album. In general, any moment when you could sit back and listen attentively.

How did it happen that you got Michiel van der Pflicht as session-drummer? Did you know him before?

One of our friends, who happens to be the drummer in some of our other bands, got us in touch with Michiel van der Plicht. Beforehand, we only knew him from his work with various Death Metal bands. We basically sent him some demos to see if he was interested to contribute to the album, to which he agreed. We feel that he really lifted the album to a next level, by also adding his own ideas, character and flair to the drum tracks we had written previously.

Is this album going to have influences on the song-writing for your black metal bands in the future?

Musically, not so much, I think. Prospectors is really a different entity with regards to songwriting. Though maybe some minor details will seep through, after all you always integrate whatever you learn, even in ways unnoticed. In terms of recording and sound design, however, I'm quite sure we'll bring our experiences with "Proven Lands" unto our other musical endeavors. Personally speaking, I am really content with how the overall sound came out.

Was this album a unique project or will you release more albums with Prospectors?

For sure we will keep on exploring! We have a lot of new ideas and a general direction to go in mind. We are currently working on a follow-up album and we have some subsequent plans as well.

Do you have some plans to go on tour with Prospectors if the situation will allow it again?

Well, a tour might be a bit of a distant dream still… but we're definitely set to play some live gigs as soon as we get the chance. We do however want to wait with our live debut until we can do a 'normal' show with standing audience, no restrictions in crowd size, etc.

Do you have some last words for our readers?

Thanks for the support we've had so far. And for all those aspiring prospectors: Get yer shovels out and dig another hole! We've got some more music to delve into in the works.

Kein Problem. Thank you for covering us on MetalBite!