Unhallow is a new band of Dismember guitarist Robert Sennebäck and Necrophobic drummer Joakim Sterner. They've recently released their first two-track demo "Dæmonum" (read review here) and with this quite unique and outstanding music they do quite different stuff compared to their main bands. I wanted to know what the main idea and agenda behind all this, and the two Swedes were very kind to give a detailed answers to the questions via email even though Robert had a quite bad accident he had to recover from (thanks again for that guys!!). Check this interview and give the band a listen, it is really worth it! 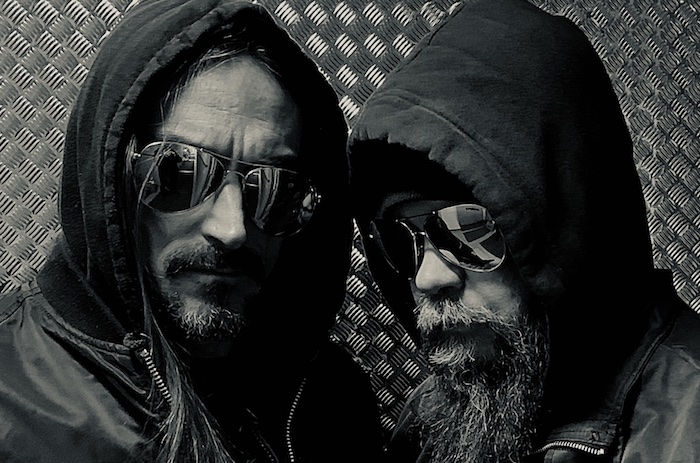 Hey, how are you doing? I hope everything is fine with you!

Robert: Hey! Well, I want to say that everything is fine, but it simply isn't. Had an accident a few weeks ago and it left me with some broken ribs and a punctured lung. But I'm lucky it didn't get worse. Apart from that detail I'm fine and super glad to have finally released Unhallow's first 2 songs!!

You're going to release a demo with your new band Unhallow called Daemonum. How did you come to the decision to form a new band?

Robert: Yes, we have released our first demo Daemonum on several platforms: Spotify, Apple Music, YouTube and so on. Free to listen to or buy to support. The decision to form a new band came from the fact that I had and still have a lot of material that doesn't fit into Dismember. In Unhallow riffs and melodies can be either death/black or heavy metal and I can also maximize them without restriction (Joakim kills my most crazy ideas).

Maybe you can tell a little bit more about Unhallow...

Robert: Unhallow consists of only me & Joakim, and I believe it will stay that way. Joakim handles the drums and I take care of all guitars, bass, and vocals. This has been a challenge for me since I'm not used to playing lead-guitars and it's been a while since I sang last time as well.

You both know each other very well from playing together in Necrophobic for some years and probably for some other reasons. Was this a main reason to play together in a new band?

Robert: Me and Joakim's story is quite long, old friends since way back and we have been working together before in both Souldevourer and Necrophobic. It was only natural for me to contact him and ask if he was interested in this somewhat different style of metal.

Joakim: I was thrilled when Robert first sent me some outtakes of this music. I was not expecting to hear what I heard, as this is not anywhere near what we do in our main bands. It's a challenge and we are now totally on square 1 with nothing to lean against and draw easy points from, so to speak.

The demo has a very modern sound that combines a lot of classic heavy metal influences with death and black metal. What were your major influences when you wrote the tracks?

Robert: I still have the same old influences from the past; Judas Priest, Iron Maiden, Accept, Saxon, Death, Slayer, Exodus (the list can go on forever) and on top of that I have gained some new ones that might not be obvious at first, but I believe you can hear it in the songs. I never, or almost at least, plan what to write. It is more that I am in a certain mood and just play an instrument. But when I put together a song, I do want to convey what I feel myself, some songs will have just one feeling all through and another song will have alternating feelings. I also want the vocals and music to be in symbiose but at the same time in contrast. Your review of the songs and other people's input has confirmed that I managed to deliver what I wanted.

Joakim: Modern sound, you say. I think it's a heavy sound and the music is not really what you expected as it involves me and Robert and from where we are known from. But I am happy to hear it sound so good.

I find it quite difficult to mention another band that plays this certain style of music. Do you want to create something completely new in the death / black metal scene with Unhallow?

Robert: Well, we have heard that before from several people that they can't say a specific genre and I have a hard time with that myself and that's why we have only written metal as a genre. Words that people have mentioned when listening to the songs is; disturbing, uncomfortable, gloomy, and melodic. Like I said it just came out this way and it was absolutely not planned to be something new.

Joakim: I am also curious to hear what people compare this to, as both me and Robert cannot say what it sounds like ourselves. We simply describe it as heavy, dark, somber and melodic, because those are the only words, we can find to describe it with. The vocals of Robert put the music in a category itself. For the better. Creepy.

The two tracks on the demo are called 'Over Vast Deaths' and 'Through The Blizzard'. I guess you don't want to do some Immortal worship... what are the lyrics about and where did you get the inspiration from?

Robert: I might have a title to a song in mind and base the music on that but mainly I write the music first and the lyrics afterwards based on the music. I want the lyrics to reflect and describe the feeling in the music and visions you get when listening. Because of this the lyrics will probably have different meanings depending on what the listener is feeling.

Do you already have some further plans for a full-length album? Are you already signed by a label?

Robert: Right now, we just want to spread the name of the band! But we do have at least 8 more songs ready, and I really want to record them soon and deliver a full-length. No, we are not signed to any label yet, but we are looking for one!

The Necrophobic guys have more and more side-projects like In Aphelion with Sebastian and Johan or AngelBlast also with Johan. Don't you think that the fans are a little bit irritated about all this? Is it a sign that Necrophobic doesn't work that well anymore and you all want to go your own way?

Joakim: I really don't hope so. I think it has to do with the 2 year long pandemic and we could not play live with the new album "Dawn Of The Damned" that was released in the beginning of the pandemic outbreak. Time was there to do other stuff.

Both your main bands, Dismember and Necrophobic, are going to play some festivals this summer. Can we expect some shows from Unhallow too, in the future?

Robert: Well, I am open for gigs, but I think it will be after we have more songs out.

Robert: Listen to the two tracks, in darkness and loud, and if you like it spread IT!! Metal!!