With their full-length debut, "The Ailing Facade", Aeviterne have released one of this year's most intriguing extreme metal albums. Although the record contains enough of the kind of dissonant churn that is so integral to 2020s death metal to ensure that the band slot quite neatly into the zeitgeist, Aeviterne have so much more to offer than the latest Immolation or Ulcerate clone. Subtle electronics are woven into the songs in such a way as to suggest that they are way more than an afterthought, and martial rhythms and stark industrial sounds blending seamlessly with the grinding guitars suggest a band with a huge sonic scope that they are only just starting to explore. I recently caught up with Garrett Bussanick (guitars / vocals) to dig a little deeper into what makes Aeviterne tick. 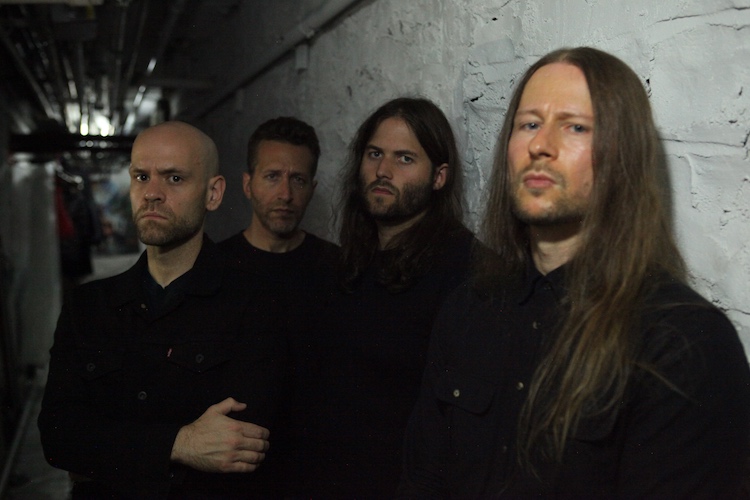 Both you and Erik previously played in Flourishing, a band not completely dissimilar to Aeviterne. To what extent is Aeviterne a continuation of that band? And what lessons did you learn from the Flourishing experience that have been applied in the creation of Aeviterne?

Aeviterne is a continuation of Flourishing, just as Flourishing was a continuation of a band I was in many years ago called Cardiovascular Sub-Hypothermia. Maybe the lessons are just about creativity, and both bands are certain points on a timeline. My hope is that Aeviterne continues to become more and more cohesive going forward.

"The Ailing Facade" took several years to record and mix before its release this year. How close is the final version to your vision for the album at the outset of the recording process? And did the process change the end result in ways that you were not expecting?

I think the point has been made with how the recording turned out. Our drummer Ian (Jacyszyn) did a great job mixing it. I wouldn't say the process changed anything in particular - it turned out close to how I envisioned it, personally. We had demoed these songs pretty extensively, and so very little was not fully realized before tracking the LP - maybe only one of the segues between songs was never properly demoed.

Your music has a coldly calculated feel, as if every layer of ambient noise and electronics, and each drum hit has been deliberately placed, as opposed to emerged via improvisation and jamming. Is that the case, and can you elaborate on your song-writing process, and how the electronics are so seamlessly integrated into the songs?

Everything is deliberate, and all aspects were conceived as part of the whole. And yes, it is the case that these songs were not written through jamming. As for our process, I'd bring in rough demos, and then Ian and I would re-demo in order to further work on structures and components until completion. Electronics were part of the process from the beginning and play a role when heard, and so were never added for the sake of it or just "on top" of the main instrumentation.

How has the arrival of Samuel Smith on guitar impacted the sound of Aeviterne? He comes from a fairly avant-garde, technical background, at least with respect to his other bands. Has his playing added anything different to the band?

Sam is a great player and brings with him a lot of musical experience and know-how. The LP was almost fully written before he started playing with us, but he did contribute to the instrumental song 'The Ailing Façade' by writing a lot of the bass.

Conceptually, I interpret "The Ailing Facade" to refer to the difficulty of reconciling one's public and private sense of self in a world in which the delineation between the two has become less concrete. Is that a fair interpretation, and can you expand on what "The Ailing Facade" means for you? And is it important for the music to reflect the lyrical and philosophical themes of the album?

The phrase The Ailing Facade is perhaps best described as representing states that could lead to potential conclusions of the human condition. With the LP, I'm getting into futility, madness, extinction, stuff like that. The lyrics exemplify and ponder these types of conclusions. Lyrically, I'm always hinting at the biggest picture (at least that I'm aware of at the time of writing the lyrics) - the reasons or questions behind, and leading to, the examples outlined. So the lyrics are meant to lead to an idea: of doubt around whether there can be consensus on what human progress actually is, and, if identified, its likelihood. Perhaps humanity's 'wheels', being mud-bound and slick with philosophical conundrums (consciously or not!), will keep spinning out until failure, no matter how much pressure we apply to the gas pedal. Of course, by failure I mean whatever self-inflicted end of humanity you want to choose. And so: is progress for humanity even possible given the circumstances of the human condition? This is the question I want to leave with the reader/listener. And yes, I'm thinking more in terms of musical and lyrical cohesion these days (as mentioned in the first answer): I think there is room for Aeviterne's growth there.

On a similar note, are you familiar with Emile Durkheim's writings on the concept of 'anomie', and the grave consequences that may follow the breaking down of social norms and interactions that hold society together? And is that an idea that the songs touch on in any way?

I'm just aware of Durkheim's name, but not familiar with these writings. And I wouldn't say the lyrics touch on those ideas specifically, although this sounds like an interesting topic!

Back to the music, the core of Aeviterne is death metal, albeit more Ulcerate than Obituary. However, I can hear some distinct hardcore influences (specifically Integrity), and also some industrial sounds that recall Godflesh. Have these bands influenced the direction of Aeviterne, and if so, can you expand on the importance of bringing these sounds into death metal?

I like some hardcore, however, funny enough, I've barely ever heard Integrity. And yes, Godflesh is definitely an influence. But it really goes back Cardiovascular Sub-Hypothermia (CS-H): the "Pulmonary Descent" demo is the blueprint for what Aeviterne and Flourishing have done, and my involvement in CS-H has been, by far, the single greatest influence on the direction of both bands. Credit to my old CS-H bandmate Glenn Sykes for coming up with these musical ideas all those years ago.

And which other classic and contemporary bands (in any genre) have been important in contributing to the sound of Aeviterne?

Killing Joke and and Immolation are two that come to mind.

Finally, where do Aeviterne go from here? Are there any tours / live shows planned, and what do you think the next album will sound like? Do you aim for Aeviterne to evolve over time into totally new areas, or simply refine what you have already built with the debut full-length?

There is a tour in the works for later this year. I'd like to both refine our base concept and evolve into new areas with Aeviterne's future music. I have some rough music lying around for a second LP, which I'd classify as "riffier". However, we plan to further conceptualize what the band is, and so it's hard to say if any of this material will work for LP number two. And I can see us pushing the electronic elements further; making this component more central to the songs is interesting to me.