Michael Schenker has just released a new album called "Universal" (review here) and was on European tour, too (live review here). Back home I had to great chance to do a phone interview with him to talk a little bit more in detail about the writing process of the album and about his 50-year career in rock history. Enjoy reading and don't be confused about all the Michaels in the interview! 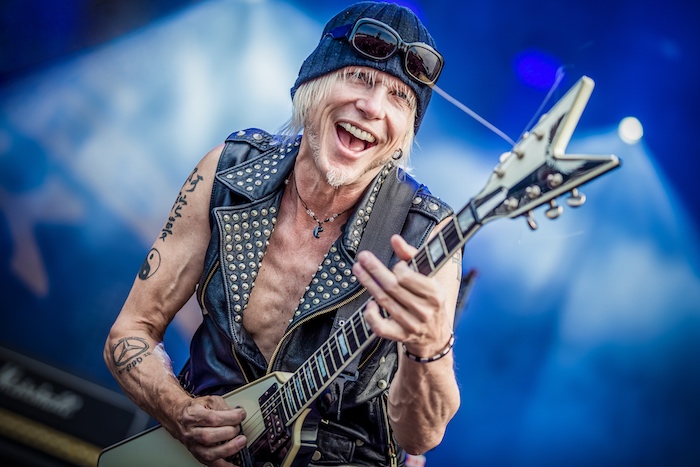 Hi Michael, did you have a good tour?

I saw you guys in Bochum and I have to say it was great. Just the fact of finally being able to see a band live again was great. How was it for you to be on stage again after Corona?

(Laughs) For the body a bit unusual, because at this age, when you haven't been on stage for two years, and the first time was back in England at the end of October, that was quite a shock for my body, even with my position to play guitar. That's already noticeable especially a little bit later. Footballers, for example, have to train themselves, stamina and all. And if you don't do that, it can be quite a strain on the body, which is suddenly shocked. The tour was now longer and the body has adjusted to it, there was everything okay.

Your new album "Universal" will be out soon. First of all, I think the cover is pretty cool. Who had the idea for it?

It was basically my own idea. Captain Kirk (William Shatner; M.) had spoken on the first Temple Of Rock record back then and that's when the idea came to me, I made a sketch and my website designer then expanded a bit. But that was not yet the right time for such a thing, the acoustics then had another idea and that became this pyramid. At some point, when we were making the new record, I remembered it, showed the sketch to Markus Staiger (head of Nuclear Blast; M.) and then changed it a bit and that's how it came about.

I didn't know that Wiliam Shatner had a guest appearance with you!

Yes, on the first Temple Of Rock record, where Doogie (White; M.) also sang for the first time. I played on his record and he did the intro with me.

What do you want to say with the title? That music is equally important everywhere?

Universal basically has several meanings. First of all, music is very universal, you can understand that everywhere, no matter in which country or on which planet, that's mainly meant that way. But you can also understand it ironically. I'm in this spaceship and I'm probably looking for venues on other planets and behind me are the UFOs and they probably met me sometime in the past and I joined them, so everybody can build their own story.

How important are the lyrics for you as a guitarist?

Basically not at all. I used to just listen to music as a kid and the music I liked was English or American. I didn't know English, so I focused on the music and for that reason alone it wasn't important to me. But the lyrics are important so that you form words that then become a sound. For that reason, the lyrics are important because through those words the singer makes some sounds that are then incorporated in different ways and through that also becomes an instrument. But what's behind it, that's not important for me and as someone said before, that it takes something away from the music if you concentrate on two things, but there are people who are maybe more keen on the lyrics than on the music or vice versa.

On the 13 tracks you once again show your skills as a guitarist. How do you manage to write such sophisticated melodies? When do you get the ideas?

Michael Voss and I have a good cooperation, we have been producing together for 12 years. He doesn't know how the songs sound until we book the studio to record, and then he gets ready right from the start to put the lyrics and melodies together and when I go to the hotel he continues in the evening and plays it for me the next morning and that's how it comes together. I then give him feedback and we never know what's going to come out of it because it's all brick by brick. I start with the music and the rest, all the ideas, who's singing and who we should maybe bring in as musicians, that comes together.

With the intro 'Calling Baal' and the corresponding track 'A King Has Gone' you pay tribute to Ronnie James Dio. Why only now or how did you get the idea for this?

Again, brick by brick - you don't know what's going to happen next. On 'A King Has Gone' Michael Voss said to me "Here, I did this last night" and he also said that the lyrics are about Ronnie James Dio and I just said "Ah, my favorite rock singer, play it!". Then he played it for me and I thought it was fantastic and then Michael Voss suggested that we have the Rainbow guys who played with Ronnie James Dio back then with us. He managed that and we had Bobby Rondinelli, Bob Daisley, Tony Carey with us. Markus Staiger also thought the song was great and had the suggestion to get Michael Kiske as a singer. We tried that and it sounded great and so Michael Kiske became the singer for the piece.

You have a lot of guests on "Universal" who contribute different things to the tracks. Was it difficult to get all those people to do it and record all the different stuff or did it go through file sharing?

We did the music first and then I explained to Michael what I needed as drums for the tracks so he understood what direction it was going in rhythmically and then we do like a guide bass and guide keyboard to that so you have a good base to work with. Of course we also have the vocals, Michael has written all the lyrics and melodies this time and that we send to the musicians and singers and they then practice it and what is important then are the personalities of the participants. The building is done, so to speak, and Michael Voss is the engineer and when everything is right between us, I first take a break and he goes to engineering. When that's done, I'm back in and you think about which version - sometimes you have three or four different versions of some instruments or vocals - and we agree at some point and that's how a record comes about.

You have been active in many bands over the years. Which one would you describe as the most important for you or your career?

Life is a development for me, there is nothing important or less important. All steps are important that have led me to today. It's all a puzzle work for me that belongs together and until the end of my life it's all as it should be.

Do you have an absolute favorite song that you are particularly proud to have composed?

I am not proud at all, maybe happy. But in general also with music, for me it's about the record and having the balance, like a well-written book, that everything is well balanced, that it doesn't get boring, that nothing repeats itself over and over again and has a certain freshness in it. That's the most important thing for me. There is no moment that can be the same, every moment is different and it depends on the moment and what is happening around. All that together, all the steps and all the little moments are important. But I don't have a favorite song. Not even on this record. Every song has different things that come out. It can be a very well done solo, some melody...I see it all very detailed and very different than a consumer who just hears the thing for the first time. By the time people hear it, I've heard it a thousand times (laughs) and that's a very different kind of being there because I'm also a creator. I do everything much different than the commercial world and I'm an artist and I evaluate everything much different than normal people do.

Now I have a question Sebastian Ramstedt from Necrophobic asked me to ask you. Some bands like to steal from you, like Iron Maiden on "Back In The Village" or Europe on the first two albums. Did you notice that and what do you think about such things happen?

Keep paying attention, but don't know anything about it. I also basically don't care, because you can't do anything about it. In the 80's a lot of people copied my style and I'm used to that, but as I said, I don't listen to music, haven't for over fifty years and I don't even know what's out there. There are certainly awesome guitarists and singers, but I always say "spreading and expressing the joy of music from the place of pure self-expression". That's why I don't listen to music, because the brain is like a sponge and absorbs everything and you automatically copy things if you are too busy as a consumer, so I made the decision from the beginning of my life to only be an artist and creator instead of a consumer. This also kept me fresh and gave me less opportunity to copy something.

How do the further plans look like? You canceled your Russian tour for perfectly understandable reasons.

We are playing festivals, Graspop, Hellfest and some more in July and August. In September, October, November we will be in America - all that with Ronny Romero as singer and after that in Japan and we hope to come to South America and Australia and then we will see.

Will your first MSG albums ever be remastered? You can hardly buy them anywhere and if you do, then only at horrendous prices.....

What advice would you give to young guitarists who have just started playing?

They have to decide what they want. Whether they want to be commercial musicians who want to get famous really fast and make a lot of money with short cuts and all kinds of tricks - so more artificial lifestyle as a musician, or they really want to be in it with heart and soul and that joy that comes from playing guitar instead of calculating - people have to be clear about what they want. Then it's also clear: if you want to be successful quickly in the short term, most people stick to the trend so that they get a piece of the pie, in other words they have to do what the trend is doing and thus copy and make something that fits in and the other direction is that you have joy in playing and not insist on becoming famous or making a lot of money.