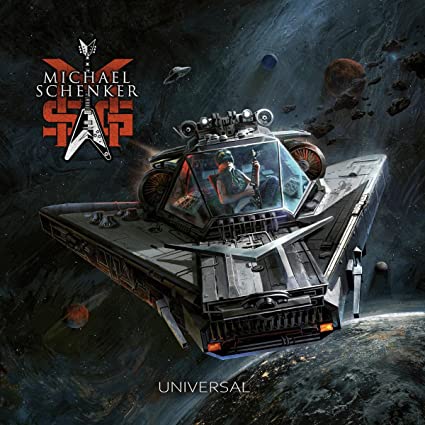 After the quite successful Immortal album and the Michael Schenker Fest CD Resurrection and Revelation we get another output from the guitar virtuoso Michael Schenker called Universal. He is accompanied by Ronnie Romero from (Rainbow) on the vocals and several guest musicians such as Michael Kiske (Helloween), Ralf Scheepers (Primal Fear), Bob Daisley (Ozzy Osbourne, Black Sabbath), Simon Phillips (Toto, The Who), Brian Tichi (Whitesnake) or Bobby Rondinelli (Rainbow). If this sounds quite interesting to you i assure you that indeed, it is.

What you can hear on Universal are 13 very melodic hard rock songs (if you get the album with the two bonus tracks) which unfold their atmosphere through the incomparable guitar play from Michael Schenker. The opener 'Emergency' is a powerful rock song with some nice breaks in it. The tact is a little bit off the regular tunes which make 'Emergency' very attractive because it doesn't go into the garden-variety drawer some rock songs may go into. 'Under Attack' sounds like a relic from the 80s which reminds me a lot of these great rock bands back in the days. The track is a wonderful liaison between keyboards, catchy riffs and some fantastic vocals and chorus. The highlight follows right away with the intro 'Calling Baal' and the corresponding song 'A King Has Gone' which is a tribute to the much too early deceased Ronnie James Dio. Some epic, yet majestic tunes which indeed reminds to old Dio stuff like early Rainbow. But not only the music but also the lyrics pay tribute to him. 'Watching The Rainbow's Rising / A King Has Gone' – those lines let you think back to the good old days the one or the other may miss. 'Long Long Road' is another fast track with some tunes that enlightens your day. It's a good mood track with some AC/DC vibes in the guitar riff and a fantastic drumming. 'Wrecking Ball' is one of the heaviest tracks on the album and with Ralf Scheepers on the vocals you get a lot of aggressive tunes here. 'London Calling' is a tribute to the rock scene in London (“Under the Flag Of Union Jack, Maiden and Priest on their Shirts”). It is an atmospheric mid-tempo rocker with a lot of keyboard tunes in it and maybe the most airplay compatible one. 'Sad Is The Song' is the slowest song on the album which reminds a lot of Black Sabbath during the Tony Martin era before Dio came back in 1992. With 'Au Revoir' they close the album but this is not a love song but again a very fast rock track. Let's hope that it's not Au Revoir for good.

Of course we cannot find classics like 'Doctor Doctor', 'Shoot, Shoot' or 'Only You Can Rock Me' on Universal but a lot of tracks are really very entertaining and no really flops to find here. I guess everybody who knows Michael Schenker and his works knows what to expect. The album is one of the highlights of hard rock / heavy metal in 2022, this is for sure and I don't know if many bands can top this. So now go and check the album – you won't be disappointed if you're into that style of metal.