Anchillys is a new death metal band hailing from the Netherlands. They (or I should better say "he") just released their debut album "Elan Vital" independently and scored a superb #2 in our August top album ranking and what you can find there is some pretty good old school death metal. I had the opportunity to talk to mastermind Andy Wit via Zoom about the debut and the agenda all behind this very mystic name. But just read by yourself and enjoy the interview. 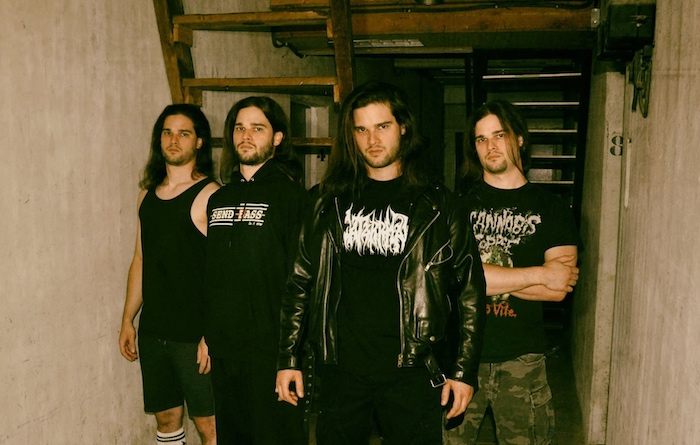 You released your first Anchillys album called "Elan Vital". Can you tell a little bit more about the band?

The whole band is in front of you (laughs). It has been a solo project from day one on and I did have a bunch of musicians also joining but it was always tricky – who can function and who not – and I had a bunch of musicians that I wore down in a way and I was starting to record the first songs of the CD on the drums and the last other member left. So I thought that I'm gonna do it all on my own and this is going to be great. That's the beginning of the band and it started 10 years ago and it was a kind of a compilation of everything that I have learned from bands that I listen to, my favorite music and also from bands that I already played in. That helped me to learn to play and to write. That's where it all started.

What does the name mean? Is it originated in Greek mythology?

It is very close to this, actually only two letters off. But it's not related, it rather stands for the name of my inner demons. I asked myself this question – which name that would be – and I came up with Anchillys. And so I had the name for the project. It is just a fantasy name.

Did you get any reactions about the album so far?

I got pretty good reviews actually and reviews keep coming in. They seem to be pretty praising. It's a very special feeling for the first album and it's great to see how people kind of tell you what your music is about. It's pretty cool to see that people understood what I was trying to write. I also get cool reactions from people I know personally, it's very nice.

You play some very brutal old-school death metal like Cryptopsy, Suffocation on the album. Are you mainly inspired by some North American technical death metal stuff?

Well, Suffocation is definitely influenced along with Necrophagist and Deeds Of Flesh. These are my big top 3. I wonder why people keep mentioning Cryptopsy because I never liked the band (laughs). It is really interesting, I still have to get in there. About brutal death metal - it's there in the music in some parts. People think about slam when it goes to that but it's definitely not the main line. It is mostly death metal – in parts it is old school, in some parts brutal and some technical death is too in there. I just had to put a stamp on it and said it's technical brutal death.

After listening some more times I also discovered some Cannibal Corpse influences, especially in 'Gate Of Hades'…

Well, not consciously. The double vocals here and there were inspired from Cannibal Corpse but for this Deeds Of Flesh were the main reason for all those very short bursting doubles just as Goregasm also. But Cannibal Corpse – it's the bigger death metal pioneer so I'll be in there obviously.

Do you have a lyrical concept on the album?

I guess it turned out into a bit of a concept. I'm not much of a lyric writer; I really like to focus on the music but you also need lyrics of course. So it kind of turned out into figuring out my own perception of what life is and what our existence means. My answer to all this is: nothing. We all feel importance to this planet but my opinion is that we just destroy it and this is the point where all will end and nothing will have mattered anyway. But at the same time we are here so we have to make something out of it and we can do a pretty good job here, too. So it is kind of all together thrown in there and it's kind of like the world is shit on the one side and the world is beautiful on the other. 'Extramundane' for example is about the journey I had writing this album. For me, that's a rather positive note. 'Elan Vital' itself is pretty much based on a spiritual voyage. It was mostly inspired by meditation of moments and out-of-body experiences that I had. It really brought my consciousness to what our existence is and this means the moments in life that brought the spark of our consciousness and existence. Of course this is my point of view and not meant to be facts. I guess Elan Vital is mostly about what is life per definition in a certain point of view. It's very cryptic and even to me, too to be very honest (laughs). I think it is mostly spirituality and the love/hate relationship of our existence.

That sounds pretty much interesting. Do you have printed lyrics in the booklet since I just got the digital promo without any lyrics?

Yes, it was a lot of work in there and I didn't want to leave it out.

You are the only person in Anchillys. Is it challenging to perform all instruments on your own or is it easier for you because you don't have to deal with other people who may have different opinions about the band?

It's very double-sided because on one side it's very easy. All the decisions are your own and you don't have to argue with anyone. If you want to go to the right there is nobody who says let's go to the left. On the other side sometimes it's all on your own and you want some feedback from somebody else who says to go into another direction because something may be better. This can be challenging. To play all the instruments, it goes with love so you just do what you love and it takes a long time. I cannot train everything at the same time. First I started recording the drums and I had a few months practicing them and there was no space for any other instruments. After recording them I did the guitars; after two years not playing the guitars and the same goes for bass and vocals. I guess I haven't done vocals for eight years so they were a bit rusty. It takes a lot of time to do all this but in the end it was amazing to do it and it was all worth it.

"Elan Vital" is self-released. Why did you decide for that option and not to distribute it through a label?

First I was looking for a label and I had a few offers. But it all felt so restricting, for example I got one restriction from a label that said that I wasn't allowed to post anything at all on social media without consulting the label about this first. I really didn't like that because I already don't like social media and I already don't like postings so there is an extra step coming in between that and I cannot do anything at all and cannot go anywhere. So I had to find an easy way. I still want to have it distributed though because I think at the same time it can also really help, of course because of letting the social base grow and reaching more people that might be interested in listening to the music. I'm open for the future, never say never, I think. We are just gonna see where it goes with this. I just want to do it independently first because the thing is already difficult enough without all the restrictions and label offers. At the same time you have to do everything yourself and that can also be challenging but I never took the easy road so let's go.

Where can I buy the album? Is it on your Bandcamp site or where do I have the possibility for that?

Yes, it's on Bandcamp. I have a t-shirt, CD and a package with a sticker and a pick.

Do you already have some plans for the future of Anchillys? Do you plan to record a second album? Maybe with a different style?

I definitely want to write more. The writing process but also the recording, mixing and mastering process has been a big job. I don't want to have all that knowledge that I have gained go to waste. I feel like I can write more and it probably will be in the same style but I will always look for new ways to express music and make it more interesting. It will not just be an extension of the first album. I will see how this one goes and when the mind is a bit clearer again I will start writing again. I'm very excited to do this.

Do you want to play live in the future?

Yes, that was always a bigger dream. In the beginning it was never meant to be a solo project but without a band of course you cannot play it live. Well, you can, technically but I don't want to. I want to play with a live line-up and in the near future I will start looking for members. I already talked to a guitar player – a friend of mine – and we already made some pretty good steps. So if there is anyone who wants to join in, please do – let's have a blast live! I'm really excited to do this, this was always a bigger dream.

The final word belongs to you!

Thank you very much for reading or listening! I really appreciate all the attention I'm getting so far and it has been an amazing journey. 10 years in the making and I really respect all the response I'm getting from you all: you as interviewer, all the other interviewers and reviewers. The fans seem to be very excited about this and I wanna thank everyone for the amazing response! I'm really looking forward to the future and what else it will bring.