Dutch trio Asgrauw have just released their fifth full-length album called "Façade" (read my review here). I was invited to join Kaos (bas, voc), Vaal (git., voc.) and Batr (dr.) via Skype in their rehearsal room to chat about the band's history, the new album and the good old times. Enjoy reading! 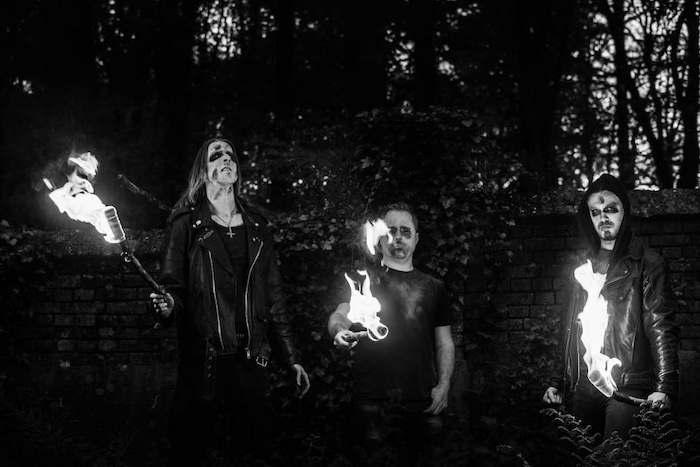 Hey, thanks for taking the time for the interview. How are you doing?

B: All fine with us! We just had a long period of Covid lockdown shit, and that was a very frustrating time. We didn't have any gigs for about 1 ½ years and now we're happy to play some liveshows again. The lockdown had such an impact on us that we even talked about quitting the band. Though, we decided to put the negative vibe into the new record.

K: Yeah, there were three months in a row that we couldn't see each other face to face. We only had video calls. Even the CD recordings of Façade were postponed.

V: Instead of our weekly rehearsals we were using Zoom (laughs). We used the time to write lyrics together. In the meantime I was just writing new riffs at home. In the evenings I sat down with my guitar and started playing and some things popped up.

K: Yeah, fortunately we do have Zoom and Skype and that new technology we can use these days

B: For Asgrauw that doesn't work. The band-vibe was lacking 'online', and there was a long silence sometimes for ten minutes… We can't write music together online. We need to be in one room.

V: Most riffs are written by me, and during rehearsals we are puzzling our way throughout all our songs together.

Asgrauw has existed since 2010 but you aren't that well-known except for the Netherlands. Can you introduce yourselves a little bit more?

B: Asgrauw is a traditional black metal trio. These two guys (Vaal – git, voc and Kaos – bass, voc.; M.) with another drummer (Takk; M.) started the band about 12 years ago, before I was introduced. But Vaal can tell a little bit better…

V: Those days I played in another band. But we were not on the same page as musicians. I wanted to play black metal and was looking for other musicians to put together a band. I came across the other drummer, Takk, with whom I played in a former band. Also I met Kaos, who was more in the punk scene. I introduced him to black metal, he liked some of it, especially the bands with a straight-forward punk attitude. We also had a second guitar player, but after half a year he quit the band and we went along together. Then Takk went to Austria and we were in need for another drummer. At that time, I met Floris at a party of a good friend of mine. What I didn't know was that he was playing in bands like Meslamtaea and Sagenland, and that he could play drums. Without expectations I sent him some demo tracks. The next rehearsal he visited us and played all our tracks as if he was always there. Ever since he is with us under the name 'Batr'.

You write the lyrics in Dutch. Is there a specific reason for that?

K: I think we can express ourselves much better in our mother language. If we write in English, for me it feels you just have the English phrases everyone is using and I think that Dutch is suited to black metal very much. It's a harsh sounding language.

V: Dutch language fits our band much better than English. We tried English with our first demo-songs but after a short while we thought that Dutch would suit us better.

What do you deal with in your lyrics?

K: Some albums have a strict concept, like Krater, that is about an apocalyptic scene with a super volcano. IJsval is about another apocalypse event, yet to come. The lyrics of this album are not very fictional, and approach reality. Ice caps are melting, viruses break out, wildfires are everywhere. Nature is taking back control and that has consequences for humanity. The Gronspech album is about old folklore from this region. Gronspech is the old dialect for the name of the village we do come from. The new album has a less strict concept. It's called Façade and all the songs, more or less, deal about death. In fact they are about the will to stay alive, or being alive but feeling like being dead (like a liturgy). There are diseases when you are completely numb and it looks like your body is dead but your brain is alive.

V: Some cultures have a very different approach on death. Some people are afraid of it, in some cultures death is more embraced. The lyrics handle death and the thin line between life and death.

Wow, that sounds interesting. Will the lyrics be released in the booklet?

K: No not in the booklet. We never did it before. I think a year ago we released some lyrics from the Krater album but we don't do CD releases with a booklet. For us the music can be heard without the lyrics. It's about the atmosphere from the songs that is important.

What would you say is the most significant difference between the new album and the ones before?

B: We always stepped back to the 90s sound, the 2nd wave of black metal like the first two Dimmu albums, old Satyricon, Emperor etcetera. That sound combined with the punk roots of Kaos, makes Asgrauw atmospheric yet aggressive. One album leans more on atmosphere, and others are more fast and aggressive. Or somewhere in between. The new album Façade is on the aggressive side, because there was a lot of frustration due to the lockdown. The sound goes back to our debut.

V: Yeah on the debut album Schijngestalten we tried some new things, without losing our own identity. We were trying to avoid cliché riffs. It had to sound 90's though, but with its own identity.

B: Well, I don't think it's even a bad thing to play with clichés, as long as a band adds their own DNA to it. We're not the type of band that feel the urge to re-invent black metal, but we certainly give our own twist to the traditional style.

Stylistically I would state that you worship a lot the 90s black metal scene from Scandinavia. Especially these atmospheric bands like Gehenna, Dimmu Borgir, Emperor. What would say are the most influential bands onto Asgrauw?

K: I don't know if there are some newer bands that inspire us much as a band. But I'm listening to straight forward black metal like Luctus from Lithuania or Whiskey Ritual from Italia. They are much more aggressive but old school with a little bit more attitude in the vocal style.

B: As a band we are really inspired by that 90's style and we adopted some of the straight-forward influences from the bands that Kaos mentioned. But in terms of production and mix, those old Norwegian bands are our reference. We want to have a certain rawness in the sound, combined with atmosphere.

V: Batr and I witnessed the 90s when black metal became popular. The music from your childhood sticks and forms the blueprint for the riffs I write today. Kaos comes from a totally different scene and these styles seem to combine well.

K: What I like about some of the praised 2nd wave bands, is not only the atmosphere, but I think the compositions are thought out very well. It has a melody and it's recognizable. Much present-day black metal sounds the same to me. Maybe just because I am an old guy (laughs).

Don't you think that Asgrauw and your other band Schavot have quite a lot of similarities so that it may be quite irritating to have two bands with the same style?

B: I've heard more people asking this. But for me it is something completely different. Schavot is my brainchild, I write, play and record everything myself. While the riffs from Asgrauw mainly come from our guitarist Vaal. He has a totally different style. He is more of a chords type-of-guy.

V: Yeah, I use more chords with subtle changes to put some spheres in the music.

The Dutch black metal scene is quite active these days. I have the feeling that every month some good Dutch black metal albums are released. Is there some rivalry between all these bands or is it like a big family?

K: There are a few 'islands' – different scenes - around some big cities like Utrecht and Amsterdam.  There is also a scene up in the north, and where we are living… there is no scene at all (laughter)! There is no rivalry that we know of.

V: During concerts you come across more or less the same people. We know each other and we share a passion for the same music.

K: Many people at the concerts here have been around for many years. We see a lot of young people coming to shows and that's a good thing.

Which bands / albums  from the Netherlands are very recommendable in your opinion?

B: There are quite a number of good bands that play the traditional style that I like. Kjeld for example, is a great band with an amazing drummer. Hellevaerder plays some strong music as well. And Uuntar, which is pagan metal, is really great. A band that we like, close to where we live, is Sammath. They play with the same aggression and intensity like, maybe, Conqueror…

V: Yeah, they have a very fast and aggressive style.

B: I think Holland is most known for atmospheric black metal. But we also have great experimental bands… Grey Aura, Cthuluminati and Murw are really fantastic. We have our own circle of bands – Zwottekring – with some bands like Sagenland, Meslamtaea, Schavot and Teitan. This list will soon be longer.

If you had the option to go back to the 90s – would you like to rather live there or do you prefer the now and here to live?

B: I prefer the 90s, absolutely! I feel really old to say this, but everything was better back then. In the 90s – before there was the Internet in our houses - there was much more mystique in music and in personal life.

V: Those days we rented CD's from the library and we copied it on tape.

B: I bought albums only because I liked the cover-art, or because some printed magazine like Aardschok praised it. At home I listened to it if I liked it or not.

Do you plan to play some live gigs outside of the Netherlands in the future?

V: We have nothing planned outside of the Netherlands, as I speak. But we would love to play in Belgium because we also like the Belgian scene. We would also love to play at the German border. We all have our families and our homes so we need something that is reachable, not too far away.

B: It was a pleasure talking with you, thanks!