Spiritus Mortis is the oldest doom metal band in Finland and I guess one of the most underrated ones, too. Lately they released their new album "The Great Seal" (review here) which is a very opulent album with many emotions and catchy melodies. I was able to do an email interview with Jussi and Teemo Maijala (git. / bass) and Marko Ylä-Häkkinen who did the lyrics for them. Soon they will be on a European tour so you'll have the chance to see them live, too! Enjoy reading. 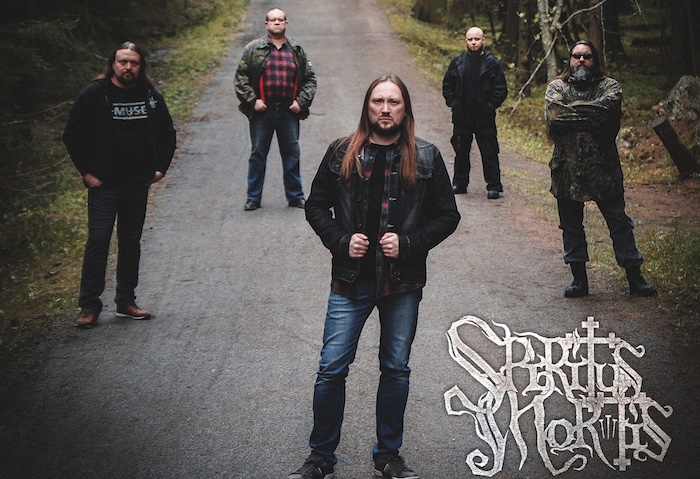 Hi Jussi, how are you doing?

Doing great! Some warm up gigs in Finland for SM The Great Seal Europe-tour.

The latest Spiritus Mortis album is really a killer. I read some really good reviews about it. Are you surprised about the feedback?

T: Thanks! I/We were worried about if it is too commercial but we knew that if we put "commercial" song through SM mangler it would still sound like…SM

J: As we say here in Etelä-Pohjanmaa where we live (local little Texas) "as always we try to make substandard stuff but get prima as usual" ;). We made this album with piety and thoughts. What Teemu means is we were afraid "if there is too much melodies", well, you cannot have too many melodies and as Teemu says, it will always sound like SM.

"The Great Seal" is much more dynamic and varied than its predecessor "The Year Is One". Was this an intentional process while the songwriting or did this happen more randomly?

M: To be honest I have no idea how The Year Is One is written and never looked at the lyrics of that album. But random is definitely a wrong word since The Great Seal is made intentionally the way it is. And for me it was 0% comparing this album to previous SM albums. :)

T: The Year is One was and is the best we can do in doomy Doom-genre so it is no use trying to overdo it, or do "The Year is One – part 2". So we decided to tune SM slightly. I have given comparisons like if The Year Is One was our "Reign In Blood" then The Great Seal is our "South Of Heaven". Maybe the next album will be more metallic, we shall see. Like I said earlier, everything we do will still sound like SM, everything will be put through "SM Mangler"

J: "much more dynamic and varied " that's correct. More groove, blues, metal, prog, melodic SM this time. We knew we cannot make a better doom album than The Year Is One, our ultimate doom album. I would say this is "from Vol. 4 to Heaven And Hell".

How much were you affected by Covid when you wrote / recorded the album?

Covid may be a quite happy event for a doom metal band concerning lyrical topics and gloomy, sad music. I find that your music sounds even more positive, almost happy for Finnish conditions.... 'Skoptsy' reminds in the beginning pretty much of AC/DC and 'Martyrdom Operation' has a very casual start, just in the vein of ZZ Top. Did you want to build in some easter-eggs in some of the track?

T: We are so slow at writing songs so we "have" to use everything we wrote. That said, a good song is still a good song, I like when there is much variation in songs, it makes listening and playing more fun.

J: 'Martyrdom Operation': at first it was "SM goes through Gates Of Babylon", but we skip organs, Kimmo makes a hitting chorus and this is the result. ZZ top meets SM sounds good. We think it is SM playing Accept and another reporter says "AC/DC". Anyway, good!" 'Skoptsy' reminds in the beginning pretty much of AC/DC", sounds good too :) Those songs fit nicely to our "more rocking SM this time"-purpose. Some surprises and "easter-eggs" (great metaphor!) are always good, it is not good if you can tell all things that are in the record even before listening to it.

'Khristovery' has a fantastic solo - if a painting would visualize this, I would say it is like this endless stairway M.C. Escher painted. How did this one come to life?

Lyrically almost all songs (except 'Puputan') deal with religious topics/ sacrifices from the last centuries. Is it some kind of concept album?

M: Yep it is. The main theme is religious-lunacy. And 'Puputan' also goes a bit to this theme since they had this ritual-style endgame with the Dutch army.

What is "The Great Seal"?

M: "The Great Seal" stands for a procedure where a man gets a full castration and not only the balls removed which would be "A Lesser Seal". I wonder which one was more popular!? ;)

J: This idea hurts my mind every time...

M: 'Death's Charioteer' is about one true morbid case where a small group of people sank stolen body parts (from a graveyard nearby) to a forest pond for their black magic business. 'Martyrdom Operation' goes to a world of a suicide bomber. 'Feast Of The Lord' is about the self immolations of the Russian Old Believers. 'Are You A Witch' is about the dark witch trials back in the day and with the song 'Visions Of Immortality' we get a trip inside Teemu's brain (he wrote lyrics).

T: I wrote lyrics for 'Visions Of Immortality'. I borrowed ideas from every place, the main idea was stolen from "So What" by AntiNowhere League". Also Ronnie James Dio's lyrics like "The Sign Of The Southern Cross" and "Falling Of The Edge Of The World". Also "The Small Hours" from Holocaust! Just anything that sounded heavy.

Kimmo Perämäki has his album premiere as "new" vocalist. What would you say is the biggest difference to Sami Hynninen?

T: Sami was and is a great performer, great guy and great vocalist. BUT I have to say, Kimmo is more pro, he takes care of his voice…

J: Kimmo has also great talent with visual things like cover art, social media, and videos. Remember to check out the first SM videos 'Death's Charioteer' and 'Feast Of The Lord' on Youtube.

Spiritus Mortis is the oldest Finnish doom band - thinking back, what would you say have changed in the doom scene in the last 35 years? Besides, do you have any news about Lord Vicar?

Jussi: I have to say we do not check out what is happening in the doom scene. Well, more SOME-stuff and action. But great, we do not have to make videos for TikTok... But now we are also on Instagram! Check it out!

Apropos 35 years - congrats to this anniversary!! Do you have any plans to celebrate this?

T: Thanks! More gigs, maybe 50 years of SM will be the greatest anniversary.

J: In Finland we have this phrase "mikä pahan tappaisi", "nothing will kill evil enough".

I wrote in my review that "The Great Seal" will probably be my fave doom album in 22 but the new Candlemass is still going to be released. Do you care for it and if so, what do you expect from it?

T: I did/do like Candlemass, just I haven't listened to their new stuff, coz I haven't got the money to buy their records… Last one I got is the Rob Lowe era which is still great.

J: Candlemass is great, it would be a pleasure to tour with them, and I am looking for this new album.

What are your general expectations for 2023, also in real life? Finland is somehow in a really tricky situation with NATO and Russia.....I hope we all get out of this quite safe...

T: Pussy! Hopefully Russian orc hordes will be crushed in Ukraine and we hear the lamentations of their women (nod to Conan the Barbarian 😊)

Thank you very much for taking time to answer my questions!!

J: Sounds good brother! Hope to see you all in SM "The Great Seal" Europe-tour

T: Thanks! See ya in Germany.