From the first notes of Sekhmet it started. I knew right away that I have to find a way to listen to Chronicles. Album took me by surprise and I have to admit I cannot stop listening to it. It is simply different than anything out there, original, passionate, well recorded, superbly mixed and it kicks ass. I had a chance to ask a few questions and JP (drums and orchestrations) was kind enough to shed some light on few matters. Click on the play button for the video to check it out and then read on. 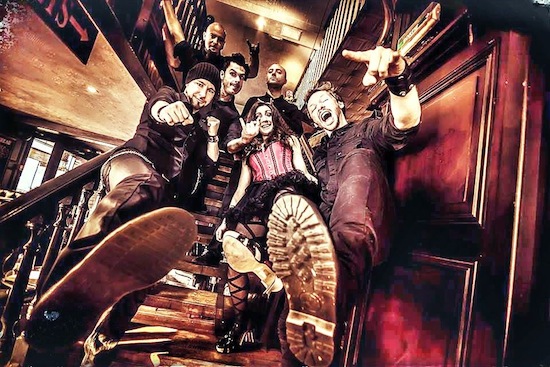 Thanks for doing this interview with us. How is Idensity doing these days?

Hi MetalBite, we are happy to answer your questions. Idensity is very fine. The press returns of our "Chronicles" album are amazing. With this album, we took the project to a new level and with a French booker (Doriath Metal Booking) and a European one (Allegro Talent) some great shows were booked in France and more to come. We are impatient to go on stage.

I think I know the answer but I have to ask anyway: any chance to see you in United States?

We will love it! If people speak of us in US we may have a chance.

Well, we're doing our part... "Idensity" What does that mean? What is the story behind the name?

We wanted to create music with a lot of density but with our own identity. The name Idensity came to us naturally. The introduction of a violin was in the same way of reflection, we didn't want to be another band which makes the same music as the others.

Violin was originally what grabbed me. It is completely different than anything I've heard before. Violinists don't just join metal bands. How did you guys hook up?

Good question! We were looking for a keyboard player and this woman came to the audition (laughs). We gave her a chance and it immediately sound! So we said "let's try it". We think that it was destiny. When I finally recorded all the orchestral parts and Mayline (violin) added her own parts; everything worked out perfect like that. She is not a specific metal fan, she listens to a lot of music styles, and she adds something very different to our music.

She's definitely a great addition to the band; I cannot imagine "Chronicles" without the violin at this point. It's been a few months since the release of "Chronicles". Did anything change in your lives after the release of the album? Are people bugging you on the streets and stuff? Have you been on TV yet? Did the French "The Voice" already signed you on as next season's judge? (laughs)

The more things changed for the shows. France is not really a country of metal even if there are a lot of metal fans; too many bands, high prices to organize shows... But with our bookers it's now easier to move forward, we can now concentrate on the music, which was hard before because we had to do everything. Unfortunately, TV shows like "The Voice" (especially in France) don't really look for metal bands contrary to Scandinavia for example; we have to make our own way. In France, metal is just underground. We hope that Europe and maybe more countries can be opened to us. Music is a long way to access to the success. 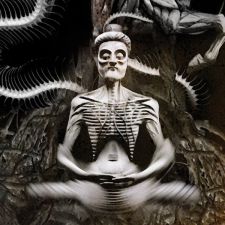 I've heard that Swedish government sets funds or something like that aside to help out musicians. Is French government in any way similar?

We've heard that in France there are some band competitions and the winners can produce their album freely for example. But honestly there is not a lot of help. Money goes more to associations which can organize shows. Moreover, the world crisis has reduced the help. You can easily understand that it's very difficult to pay tour support which is very expensive in comparison of what you earn. It's always a fight.

Are you guys professional musicians or just getting out your passion for music?

We are not professional as we all have full time jobs; most of us are engineers. As we said, in France, it's not really possible to earn your life with music; we have to deal with it. Sometimes it's hard to merge professional and music life but it's only a question of passion and we still have this passion.

Let's hope you guys sell millions of records and become filthy rich (laughs) "Chronicles". Can you explain the title? Better yet - last page of the booklet has a note that says: Chronicles deals with the beliefs and myths about origins of the end of life. Can you tell me more about the concept, the lyrics and the idea behind it?

Thanks for your enthusiasm! Our singer (Chris) found this concept of the beliefs and myths about origins of the end of life; it deals with how humanity can confront its own fears. Chronicles is definitely a concept album around this theme. The idea was to create a different musical atmosphere in each song (for example the use of choirs in the Christic theme, Duk Duk in the Islamic theme etc...). Each song is about the myths of a specific civilization in order to invite the listener in a journey. Chronicles means a review of all these civilizations.

I read the lyrics, and then re-read them over and over again. They tell stories and explain things, but it surely can be a challenge to decipher the meaning. What I'm getting at is (for example) in the song "Annunaki", there is a passage in a language that sounds evil and ancient, and gives me shivers every time I hear it. Who wrote this? What language is this in? And what the hell does it mean?

Annunaki is the Sumerian Theme. The words you hear in the song are the translation in Sumerian of the tablets which tells the story of Atra-Hasis legend. You can learn more about the Atra-Hasis legend here and here.

Chris is also responsible for all the artwork on the album, and his work in my opinion enhances album's visual aspect very well. Can you tell me if this is something that he created himself or is it a part of something else (another art)? Can you talk a little about the visual side?

Chris is a designer; he naturally proposed us to create the artwork. The front cover represents the Christic Themes of the album with the songs "Antikristos" and "The Seven Seals" and every artwork in the booklet refers to a thematic of a song.

I see that the album was recorded in summer of 2012, but released in October 2013. What was the delay - did something happen that caused this to take so long?

Yeah, the recording of the album was very hard and we didn't know that the release will be even harder. Some members had to face personal problems at this time. We also had to find a new label so we wasted even more time. Moreover we had to change the sound engineer twice because the album was too hard to mix. Some songs like "Loki" had more than 30 orchestral parts; we had to pre-mix them to obtain the result we want. Dan Swano saved us with his great experience. At the end, with all these problems it was a kind of miracle to release such an album.

When you talk about orchestral parts - do you mean an actual orchestra recording? You mean real guys with tubas and girls with triangles? (laughs)

No, it would have been too expensive (laughs). We recorded all the orchestral parts with professional keyboards.

We wanted to invite the listener in a journey; the different civilizations had to be recognized immediately with some characteristics musical sound. For example, we used Buddhist choirs and bells in the Buddhist theme, sitar in the Indian one... We had to make lots of sound research. The difficulties with all this keyboards parts were to make a selection and to keep all the band united around the different choices; it was hard sometimes, everyone had to defend his own part but at the end we are very proud of the choices we made. The things we are most proud of is certainly to work with Dan Swano who was the only one who really understood what we wanted especially with the specificity of orchestral parts.

Dan Swano is DA MAN (pretty much everything he touches turns to gold). Thank you so much for letting me in on the creation of "Chronicles". I enjoyed the album immensely, and I will do what I can to get everyone talking about Idensity. Last words are yours...

Dan did a great job and took the album to a new level. Really thanks for your kind words and this great interview, it means a lot to us. We hope that your readers will know more about Idensity.
Everyone can order our Albums and T-shirts on http://idensity.bigcartel.com It's important for us to make good project in the future.
Our website is also here and our facebook.
Stay Metal